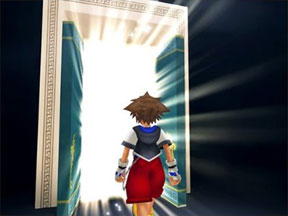 I have to start by saying that I’m a huge Kingdom Hearts fan. Huge. The reason I allowed my husband to purchase a PS2 lo those many years ago was so I could play the original Kingdom Hearts game. I’d held firm to my edict that an Xbox and a Game cube were more than enuff for one family, until the offering of Square Enix and Disney goodness melted my icy resolve.

With guilty pleasure I plugged into its stunning magical world and made my way from Traverse Town to Wonderland, from Halloween Town to Neverland. I smote the Heartless, I rescued Dalmatians. I adored it. I couldn’t bring myself to finish the game because I didn’t want it to end, ever. Sure, most people thought I was a loon, but if I was crazy it was with love for the tour de force awesomeness that was Kingdom Hearts.

So I was kinda jazzed when chief editor John sent me the ‘bridge’ game to review. Originally for the DS, this nugget supposedly happens between the first game and the sequel, Kingdom Hearts II. The game opens with Sora, Donald, Goofy and Jiminy Cricket [still keeping the journal] trying to find King Mickey and Riku.

A mysterious stranger appears and cryptically tells them something they need is in the castle up the road. And off we go. They enter Castle Oblivion where they find they can’t remember how to do anything. OK, I can see that. It’s a new game after all, and players kinda have to start at the beginning. Play begins as a well crafted tutorial explaining how to maneuver ensues.

That was when I started to fall out of heir-presumptive love with this game.

Scrolling thru a card deck to choose my moves is already not my favorite thing. I can see how it might have suited a DS but I’m too darn old to target an enemy, scroll counter-intuitively thru my cards to pick a card that’s better than theirs, make sure I’m facing the right direction and keep close enough to effectively counter attack the heartless while they are busy kicking my butt. Maybe the young whippersnappers today can do all that, but I’m too slow.

And did I mention the controls for scrolling thru the card deck annoy me? It’s bass-ackwards, and I can’t change it to suit me. My brain can’t get the message that to get the next card to the right I have to click the left trigger button. It keeps trying to click the right trigger and goes further from what I want instead of closer.

Another thing: Donald and Goofy aren’t with you in combat. They have cards that let you call on them. I found Donald is kinda worthless, but as usual Goofy is a good guy to help you out in a pinch. His whirling dervish of shield smashing is particularly effective when you are surrounded. You just run around your foes and he Cuisinarts them behind you.

There are also ‘special combo attacks’ you can attempt when you collect a group of cards to super blast the bad guys, but I have yet to manage it. I can’t seem to pull it off while they are busy draining my HP. I die a lot. Not so much fun.

As you fight you get more cards that you later use to unlock other rooms. The rooms you ‘synthesize’ have properties based on the cards you use, which is kinda cool. You end up making your own levels that way. Options include sleepy heartless, feeble heartless and never ending heartless swarms [which help you pick up cards].

In addition to ordinary rooms where you beat up on heartless there are ‘story’ rooms where you re-meet people from the first game from your memories of them. It’s sort of like a ‘season highlights’ TV episode, where everyone sits around an reminisces about things that happened before -except exactly opposite because your memories don’t remember you.

I read there is new content in the game, but other than the fact that they whacked the combat system, I must have missed it.

“Well,” I think to myself, “maybe it just starts slow. Maybe I just have to get thru the boring stuff to find the fun stuff.” I trudge along. I fight heartless. Rinse, repeat.

So after hours of playing and dying I’m finally getting the hang of things. I’m at level six, still in Travers Town, having unlocked some story elements and rooms that I can’t tell apart. Then the most irritating thing EVAR happens. Because I can’t keep the button for jumping and smacking things with my key blade straight, I’ve broken the only box that will let me get to where the doors are. I’m stuck.

“What the heck? Are they kidding me?” I’m thinking. Nope. Since I have been saving periodically, but using the same file, I have one option. Start over.

My Husband, the ‘experienced’ gamer tisk-tisked at me and tried to explain that you ALWAYS save your games as you go in new files in case you have to go back and replay something. Oh sure, NOW he tells me. GRRRRRR! How was I supposed to know that? Anyway, I don’t think I should be forced to play a certain ‘accepted’ way in order to not get frustrated with a game. It is supposed to be entertaining ME. At this point if I’d paid money for the game I’d have been ticked off and trying to return or exchange it. As it was I just didn’t want to play the stupid thing anymore.

Of course a friendly “How is the review going?” email from John reminds me I still have to tell the world what I think of this game. Hmmm. How do I manage this? I did what any enlightened grown-up would do. I asked my best friend’s ten year old kid if he would play the game for me and I could just watch.

Surely he would not have the same trouble an old fogy like me had with pushing the right buttons. Kids today have a natural cunning when it comes to games. He had played the DS version and was excited to play on the PS2. Then I found out he really wanted to play the original Kingdom Hearts, not the Chain of Memories game. To be honest, that’s what I’d rather be playing too.

I am still trying to find the will to finish this game, mostly because it has sucked all the fun out of playing for me. At the rate I’m going there is no way I’m going to get to the reverse mode where you get to play Sora’s friend Riku who also goes thru the castle. The look and sound of the game echo the first masterpiece, so no complaints there, but the game play and fun factor blow. So here is my recommendation. Skip it. Replay Kingdom Hearts instead. It won’t let you down like Chain of Memories did for me.