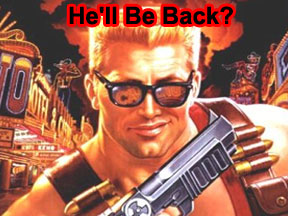 I have to admit that I was somewhat puzzled by the outpouring of grief for the loss of Duke Nukem Forever. I mean, was anyone actually looking forward to this? Nostalgia is a funny thing people, and sometimes it clouds your judgement.

Okay, so DNF had become an industry joke. As Todd rightly pointed out, twelve years is a silly amount of time to spend in development and that's what made it all the more endearing. Bless them for thinking that they really were making that game. What exactly were they doing for 12 years?

Although, you have to feel sorry for 3D Realms team, who have been stuck in Dante's circle of development hell with the game that brought them to their doom. Not only have they just lost their jobs, but they also have nothing to show for those 12 years of purgatory. So never mind lamenting loss of Duke and think instead of the poor souls who have been living with that meat head for all these years.

As far as I'm concerned, it's highly likely that the death of Duke is a good thing. It's been 12 long years and a lot has happened since 1997. We've been through three generations of consoles since then for pity's sake. Duke's been developed for several different engines, so lord knows what kind of a soupy mish-mash the game would have been anyway. Most importantly, Duke Nukem just isn't relevant any more.

Duke Nukem is a child of his time. That time was the 80s and thankfully we've moved on. He's basically an old-fashioned all American gun-slinger, complete with big gun, a penchant for big-breasted ladies and a flat top that defies physics. I know he's a pastiche of 80s action heroes, such as those played by Arnie, Stallone and Jean-Claude Van Damme, so his misogyny and machismo is excusable as humour, but even that is past its sell-by date.

Arnie's governor of California now, which just about says it all.

Twelve years ago we were amused by Duke's one-liners and the snigger, sex and big guns gags. However, thankfully the industry's more sophisticated than that now and so are gamers. We expect a bit more depth from our games today (not much, just a bit) and we'd probably be laughing at Duke for all the wrong reasons. Let's leave him in a pink cloud of nostalgia, in a more naÃ¯ve time.

Oh, but you do know, all this fuss about Duke, means he's not gone, he's just lurking in the file marked "Cash Cows." In the words of another action hero – he'll be back.