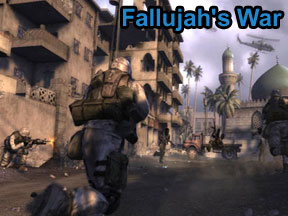 In our recent GiN Lounge podcast on violence in games, we basically concluded that a little bit of violence is okay. Killing zombies doesn't spill over into our every day lives and inspire us to shoot commuters or plot to murder our neighbours or their yappy dog (but that's another story). No, videogame violence is pretend violence and that's okay. The Lounge Lizards have also discussed the industry's preoccupation with war games and military situations. As if on cue, we have gaming's latest controversy, and it all started when Konami decided to release a game set in the Iraq war.

See, it went something like this. Week one, Konami announces new military shooter called ‘Six Days in Fallujah' sees dollar signs. Week three, Konami says, "Fallujah? Where's that then? Nope, definitely nothing to do with us." And the game is pulled.

Media and public uproar has been seen in reaction to the game, which recreates the real conflict in Fallujah. In contrast, the game has also seen support from the games industry and military figures. Clearly this leads to another discussion about whether war can really be used as entertainment and can games ever deal with complex issues sensitively enough? Well, follow me dear play chums and let's decide for ourselves.

‘Six Days in Fallujah' is being developed by Atomic Games and is based on diaries, recollections, video and photos from US Marines who returned from the war. Apparently these Marines contacted Atomic, asking the developer to tell their story. The game was going to be a third-person shooter with players taking on the role of US soldiers. Nothing unusual there then.

However, Atomic decided to bring a documentary-style to the proceedings by peppering the game with interviews of soldiers who fought first-hand in the war. With ‘Six Days' Atomic aimed to bring us something that no other videogame based on war had managed to do – insight into what actually happened and bring home the horrors of war.

Peter Tamte, president of Atomic Games, told The Wall Street Journal (WSJ), "For us games are not just toys. If you look at how music, television and films have made sense of the complex issues of their times, it makes sense to do that with videogames."

Throughout development, Atomic has been working with dozens of soldiers who were in Fallujah, using their photos and classified imagery to bring the game's setting to life in accurate detail. Before the dropped-like-a-hot-potato reaction of Konami, Atomic was talking to Iraqis who were also involved and hinted at the possibility of players stepping into their shoes and fighting against the marines.

However, right from the beginning, Atomic's approach to authenticity and pushing the boundaries of war games didn't seem to echo comments coming from its publisher – Konami.

It seems to me that publisher and developer are singing from completely different hymn sheets here. Konami's saying, war makes good games that sell well and Atomic's saying that games can comment on the issues of their day. So which is it guys?

Of course the tabloid press had a field day with this one. The Daily Mail had a quote from the father of a son who died fighting in Fallujah in 2003, saying it was "crass" and displayed "bad judgement and bad taste." And when an executive in the games industry shrugs his shoulders and says, "It's just a game" who can blame the parents of dead servicemen being upset.

It seems to me that Atomic was trying to do something different with this game, with the support of Marines and people who experienced Fallujah. Did Konami really think it could just publish a game based on such a sensitive episode of very recent history without any criticism? Was it just naivety or sheer stupidity? Atomic and Konami appear to have been involved in this game for very different reasons and at the first sign of trouble Konami's dropped it like a hot brick.

The industry can't go on relinquishing all responsibility because "it's just a game." Konami really should know better and their integrity pretty much went out of the window on this one. If video games really want to be seen as an intelligent means of expression, issue-based titles need to be handled with respect, sensitivity and foresight – from the publisher, not just the developer.

Hopefully, Atomic will get another publisher to back ‘Six Days' and we can at least make a judgement on the success of their venture, rather than chastising what might have been.