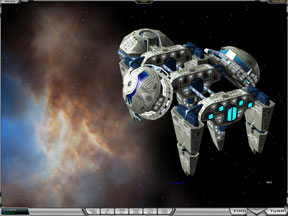 When Galactic Civilizations II: Dread Lords came out, our reviewer was pretty impressed. Given that it was possibly the most in-depth turn based strategy game ever created, and given that it takes place in space which by its very nature is infinite, you end up with a game with endless replay ability. You can see our review of it here.

But even the best of games have some problems, or at least quirks, and the new Dark Avatar expansion pack adds some great gameplay elements into the game.

Most of the changes are relatively minor ones, and the overall rating of the game is the same as the Dread Lords score, which at 4 GiN Gems is pretty high. However, we did bump the gameplay score for Dark Avatar up half a notch, to 4 1/2 gems, because it does make the game both more realistic and easier to play.

The best change is that the tech tree has been streamlined a bit. No longer will you be pulling your hair out wondering why you can’t add mass driver weapons to your ships when you have spent the last year researching them, not realizing that you also require some obscure upgrade to your hull technology before they will work. It’s still not quite perfect, but a lot easier to figure out your research plan, which anyone who has played the game quite a lot will realize is a big element of a winning strategy.

Another element that has been changed for the better is a toning down of the planet rush that happens in the early game. In the past a good strategy was to rush out with colony ships and try to claim as many high value planets as possible, with the value equal to the number of free building spaces where you could put food crops, research facilities, manufacturing centers, space ports or any number of special buildings.

In the early game it was very unlikely that anyone could come along and take a planet from you, and probably would not want to risk a war doing it anyway. So the early rush was a big part of the game.

The rush is still the case somewhat, because you can’t win without exploring what is out there. But not every planet is a shining Earth-like pearl in space. Many planets are now not only unsuitable because of low or no free build spaces, but also because they have atmospheres or terrain that are hostile to your race. You might get lucky of course, but many planets are covered in water or bathed in radiation, so you can’t just pop down your flag and call it your new home.

However, there is a silver lining to this, and that is new technologies that can be researched to overcome planetary difficulties. Perhaps you can invent a radiation shield that will prevent your people from getting sick, or a way to build floating or underwater cities. To some extent in the original game there were special places on some planets that required specific technology to use, but here entire planets may be out of your reach, even if they are very close to home.

This makes the game much more realistic, and makes it harder to plop your flag down everywhere in the known universe without first investing some time and money into the process. This also makes planets you are able to colonize much more valuable to your strategy, whether or not you find them first, or in the hands of an alien race.

Another new aspect of the game is the superability, which is a specific ability that is different for each race. A super diplomat is able to get better deals from opponents for example while a super organizer can bring all like minded races into a war if they are attacked. It is basically a way to further distance the many races (and any custom races you create) from one another for a unique experience.

Although the original title boasted good AI, with Dark Avatar it’s even better, if you want it to be. You can customize every aspect of the computer AI for each of the different races from how much money it gets compared to you, to how smart it is about spending its credits.

There is also the dreaded mega-event, which is a game altering problem or change that affects the entire universe at the same time. Examples are a plague or a sudden upturn in the number of independent pirates cruising the space lanes. Most mega-events that we found hurt you, but they also hurt all the other races more or less equally. So your ability to survive a game might depend on how you deal with a mega-event (which is random) compared to others. Sometimes they play into your hands, weakening an opponent right before you are about to strike, so long as you can handle the hit yourself.

Graphically, the ships look a lot more detailed. The ship building module also has a lot more parts and pieces to help you design a unique battle fleet. And there are even more custom made, player created fleet designs out there on the Web now that you can download and incorporate, from your favorite Babylon 5 race to Star Wars to flying 1950’s automobiles – you know, the ones with the big fins.

Dark Avatar takes an already great turn-based title and improves it significantly. All the changes are fairly minor in nature, but when taken as a whole, they serve to increase the playability of the title significantly, which will be a treat for longtime players and an incentive for new ones to hop aboard.