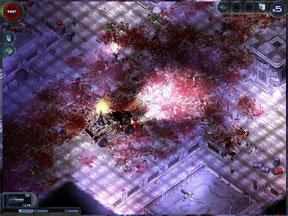 With a name like Alien Shooter: Vengeance, you pretty much know what you are going to get. If you started playing and thought you were in for a puzzle game, well, then you might be a little bit off the mark.

Unlike most Shooters that take place in fully 3D environments, Alien Shooter takes us back to the days of yesteryear, when side scrollers were all the rage. The beauty of a game like Alien Shooter is that for the most part it’s pretty mindless, and you can learn the controls in under a minute. Basically it’s just arrow keys for movement and the mouse aims and shoots. Flicking the mouse wheel up or down changes weapons, and that is about it.

The plot of the game is pretty thin. You are basically a mercenary who has been hired to do odd jobs for a corporation, and of course said cooperation is into all types of bad research and takes on more than it can chew. The end result is that suddenly there are hundreds of monsters running around in all their facilities, killing everyone in sight. You get assigned to do odd jobs that range from getting inside a bunker to check out what is going on to simply driving up a road Mad Max style wasting everything in your path that moves, cause the monsters have already killed everything human.

The game is rated M for mature, because you do a lot of bloody killing. You find a lot of people who have been half eaten by aliens lying in their cubicles and whatnot, but the bulk of the blood is when you blow monsters away.

Depending on your weapon, they die in different and interesting ways from freezing into blocks of ice and then getting shattered, to burning up alive, to being splattered against a wall, to exploding like an overripe blood sausage.

Indoor rooms start out painted blue, and end up completely red by the time the 987th alien terror has rushed you in an insane bonsai charge. Carrying over 6,000 rounds of ammo for each weapon at any one time is not out of the question. There are that many monsters.

Graphically, the game is quite good. It can’t measure up to something like Doom 3 or Half-life 2, but playing it, I was constantly wishing that back when the side scrollers were popular, that they looked this good.

The audio is also surprisingly good. You have a commander who tells you what you mission is, and sometimes shows up to help you out in some missions, if indirectly. The voice acting is quite good, though not a huge part of the game. Still, it helps to set the mood and it’s nice to know that other people are still alive out there in the world somewhere.

There are some nice RPG aspects to the game, at least in a tactical sense. You get experience as you complete objectives and are able to level up. This gives you five points per level that can be put into your character to increase your stats.

You can either level up your main stats like strength, or specific weapon stats like becoming a better shot with shotguns or pistols. Some of the more advanced weapons and armor require a minimum level of proficiency before they can be equipped.

There is a handy computer shopping mall that you can pop into at the beginning and end of most levels. Here you can sell old weapons or things you have collected along the way and then buy new stuff. I’m not sure if the computer is supposed to be replicating new items for you or what, but it has a huge selection to choose from, and gives you a good price on trade-in items.

You get some money for completing a mission, but a lot more cash can be found by breaking open chests and boxes you find along the way, plus dropped weapons are pretty expensive when you sell them. I never really had a money problem and always had enough cash to pick up a new weapon I wanted once I built up enough skill to have it.

Will Alien Shooter be winning any Game of the Year awards? Probably not. But, I know I for one look forward to playing it every night after work. I get to blast waves of aliens, get a modicum of RPGing and plot, and don’t have to think too much. In the end, Alien Shooter is a lot of fun, and not very expensive. And it’s got more blood and gore than you can shake an automatic shotgun at.