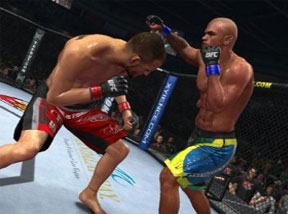 If anyone thought that Brock Lesnar had lost his touch, and had no chance of beating Shane Carwin at the last UFC PPV, then they were dead wrong. Not only did he endure a pounding from Carwin at the first round, he took advantage of Carwin punching himself out…in the form of an arm triangle choke, something I never thought I’d ever see him do. All of this in a main event that finished what many consider one of the best UFC PPVs in recent history.

I guess we can say that the cover curse doesn’t apply to UFC 2010 Undisputed.

After a successful 2009 campaign, this year’s release improves on almost everything that made the first game great. The first improvement is to the combat system. Not only are new moves available, three brand new disciplines are available: karate, Sambo, and Greco-Roman wrestling. Close-cage actions are now added, as well as a new sway system. New submission possibilities are now available, but as of posting this review, I still have not been successful at completing a submission in match, only in practices. I hope soon they are made a bit easier for a player to perform them, as the CPU tends to be successful.

In addition, many of the complaints of last year’s game, namely in the lack of southpaw fighters, have been resolved. The clipping issue regarding long haired fighters is now gone too, and finally for Clay Guida fans, he is now added to the immensely huge roster.

Huge is an understatement, as each of the five weight classes (lightweight, welterweight, middleweight, light heavyweight, and heavyweight) have anywhere between 20 and 25 fighters to select from. However, as the UFC is constantly evolving, thanks to Zuffa’s minor league promotions (such as World Extreme Cagefighting) and the Ultimate Fighter TV series, I only hope that THQ continues to build on that roster with DLC. The only DLC available at post time was a Gamestop exclusive pre-order bonus of four fighters: James McSweeney, Marcus Jones, Brendan Schaub, and Roy Nelson.

I do hope this because what I consider the best addition to the game will really need it: the Event Mode. Yukes and THQ are taking the successful PPV mode used in their WWE series and finally adding it to UFC, allowing recreations of some of the best PPVs ever made.

Each event mimics the real PPV, starting with the "gladiator" intro with actual comments made by English speaking fighters (other fighters are narrated by color commentator Joe Rogan.) Then we have the comments made by play by play man Mike Golberg along with Rogan, and even show the Rules of the Octagon in the same way as an actual event. It is quite impressive to watch. Heck, even THQ added the fight prediction vote for the main event, even if it is just an add-on. The production quality is amazing, and this is coming from someone who was quite impressed with the copyright graphic added on Smackdown vs. Raw 2010!

Even better, Events can actually be downloaded from the web. The first fight was of UFC 113, with the Rampage Jackson/Rashad Evans main event.

The Ultimate Fights feature is back this year, once again requiring each fight to be completed the same way the original fight ended. However this time the requirements are tier based, offering multiple awards for completing various tasks. It’s still a fun little diversion, and reliving some of the UFC’s greatest fights is always fun, but it’s nowhere near as enticing as the Event Mode.

Career mode is back as well, but in my opinion, it might be the weakest addition to the game. It actually starts with your fighter starting his career in the (now defunct) World Fighting Alliance and working your way up the UFC ranks, competing in Ultimate Fight Night broadcasts and finally leading up to a title match and possibly the UFC Hall of Fame. While it sounds great on paper, the problem with the Career mode is again, like last year, way too menu-based.

While there are many more attributes to build upon, the problem is it’s hard to keep them up all the time because after a few weeks, my skills started to diminish and I couldn’t keep them up. It ends up being more frustrating than entertaining, and as a result I ended up going back to the more enticing Event mode.

Am I being too kind about the Event mode? Not at all. In fact it is the best part of an already excellent package. UFC 2010 is quite the improvement over its freshman effort. As a huge MMA fan, still cheering over Brock Lesnar winning and celebrating the fact that Fedor "I’ll never be in the UFC" Emelinaenko lost by double submission, I am happy to see the final results of this game and am looking forward to more fighters coming out and simulating upcoming PPVs.

Hopefully in my next simulation Anderson Silva will be knocked out by Chael Sonnen, a prediction for UFC 117 next month that I would love to see come true, after what Silva did in his last fight.

But I’m also seeing how the virtual MMA competition will heat up when EA finally gets their game out. Somehow I got the feeling UFC will end up on top, as this year’s game is perfect for fans of the UFC and MMA in general.

CONS: Menu heavy Career Mode gets tedious after a while, and nowhere near as fun as the rest of the game. Still quite difficult to perform a successful submission.