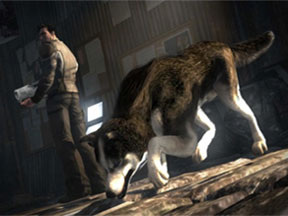 Dead to Rights: Retribution is a third person shooter and while it’s no Modern Warfare, it can be a lot of fun, with some unique elements not found elsewhere. There is a lot of melee combat as you are chronically out of ammo. If you need a gun, you have to run up, grab the gun from the guy shooting, and if you’re slick you can pop him in the head with a bullet from his own weapon. Now, that’s pretty cool

You play as Grant City police officer Jack Slate and his Husky companion named Shadow. Yes that’s correct, this time you get to go on missions as the dog. And honestly, those are some of the best missions. You really don’t get a whole lot of background, but pretty quickly you get the idea that Grant City is in decline and the criminals have a huge arsenal and seem surprisingly well-organized, which is new. Eventually you get an idea of what is going on. It makes for a good, if a bit predictable, plot.

In the first mission Officer Slate arrives at the scene of a hostage crisis at a TV studio, and he pushes though the idiot trying to negotiate and storms the building as a one man SWAT team. This is probably one of the most dramatic moments in a video game in recent memory. Originally armed with a pistol, I quickly upgraded, thanks to the bad guys, (see above) my way though a number of weapons. Sometimes the new weapons were better then mine, but mostly I switched because I was out of ammo again.

Ranged combat is pretty easy, with your standard run, aim, shoot, duck behind cover and shoot etc… They have also added a pretty simple melee system with two types of punches and a block, and when you do well and act quickly you can hit the right button and do a take down move, or grab their gun. Early on in the game it’s fun to see all the different moves you do. Later on it can get repetitive, but that is typical of many games.

I should mention that there is a lot of blood in the game. In fact, you end up seeing a lot of the killing in slow motion. Some of the killing is over the top, in the way that Soldier of Fortune was when it came out. It’s kind of cool, but the faint of heart should take note.

Before I get into playing as Shadow, I should mention that I installed the pre-order exclusive DLC Jack pack (armor for Jack) and Shadow pack (Stealth camouflage for Shadow) before I ever played as Shadow. I would highly recommend both of these DLC packs for anyone playing the game as they are both very helpful in their own way, basically keeping your main characters (Jack or Shadow) alive for a lot longer.

When you are playing as Shadow the game becomes more of a stealth attack game. Shadow is very stealthy and can see enemies though walls. As Shadow, you can run up and bite someone, but you’re best attack is to approach stealthily and do a take down, and then drag the body to a spot where it won’t be detected before moving on to the next kill. It is all about timing. The seeing though walls is done with a kind of thermal site where the bad guys are red and the known good guys are green. While you’re playing as Jack, you can still utilize Shadow by giving him some rudimentary commands using the d-pad. And if he falls in combat, you can move up and revive him. He’s great against the lower level baddies, but not so good against the tough ones. But if you attack in unison, he can be a helpful distraction while you get your shots off.

The main area where the game is lacking is in the graphics department. The default camera angles are not always great, and the graphics just don’t look that good, especially in the bullet / shotgun blast hits, takedowns and cut scenes. And the lighting is never very good. Worst of all Shadow just does not look like a dog to me, he could have been rendered better. He’s a star of the game, and sometimes I swear I saw Shadow walking on air. My final comment is that the dialog is pretty funny, in a so-bad-it’s-kinda-good way.

On the cool side, and I really hope to see more of this in future games, both the PS3 and Xbox 360 have rewards that you can earn for your online avatars. Rewards for Xbox Live and PlayStation Home were both tested and earned for this review. These rewards trigger if you’re playing the game on at least Officer level (sorry, Recruit does not count.) Eventually you can earn an entire cop suit that looks as good as anything you can buy directly for either online world.

You get the torso cop-looking armor for just completing the game. For everything else, you need to earn rewards. Gloves are earned for completing a level without firing a shot. Shoes are earned for tag team killing 20 guys in a level with Shadow. Glasses are won for 20 head shots. And you get the pants, complete with nightstick, if you can rescue all of the hostages from the TV studio level. This basically requires taking out the two terrorists right outside the studio before they can execute any of the people on the ground.

As a marketing tool, this is pretty sweet. Walking around in the cop suit, which makes you look a bit like Robocop, we got many, many people asking where we got the outfit. When we told them it was from playing Dead to Rights: Retribution, they wanted to go out and get the game too.

Overall, I had a really good time playing Dead to Rights: Retribution. If you are looking for a fun, bloody shooter, this is the game for you. That said, I don’t recommend it for the Hard Core Shooter fans looking for the next modern warfare 2. It’s really more of a mix of shooting and hand to hand combat, with much more of an emphasis on being up close and personal with the bad guys.