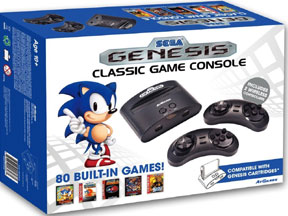 New Genesis Console Even Better Than The Original

I know this is a little late, but I got one heck of a Christmas present this year, a Sega Genesis. I know I’m about 20 years late to the party, but I was a Nintendo kid and never owned a single Sega console in my life. This doesn’t mean I haven’t played any Sega games, but the ones I have are few and far between. Lucky for me, my grandmother-in-law eyed a rerelease of the console at our local Family Dollar.

The Sega Genesis by AT Games is a lot like those plug-n-play Atari 2600’s that started showing up a few year back. The console comes with a Sega Genesis console loaded with games, two controllers, AV cables and a power supply.

There are 80 games loaded onto the AT Games Sega Genesis. Forty of these games are actual Genesis games and the other half are just random generic games. The Genesis games that are loaded on the console are great ones. Some of the preloaded games include: Sonic the Hedgehog 1 and 2, Spinball, 3D Blast and Sonic & Knuckles, Streets of Rage 1, 2 and 3; Golden Axe 1, 2 and 3, Ristar (One of the games I have actually played and absolutely love), Ecco 1, 2 and Jr., Alien Storm and Virtua Fighter 2.

As you can see, some of the games loaded up on this Genesis are really solid titles and I enjoyed playing all these games that I missed out on as a kid. I invited some friends over after getting the console setup and we sat around and played games together for a long while. I’ve got to say, I missed that fun feeling of actually sitting beside someone while playing a game rather than talking to them online.

The one thing that really makes the AT Games Sega Genesis stick out is that it has a port on top for original Genesis cartridges. Not having owned a Genesis before, I had no cartridges, but my friend Trevor dug through his old stuff and lent me Shining Force II (Sadly the internal battery is dead and games can’t be saved, but I’m looking into replacing it), Sonic the Hedgehog 3 and Battletoads & Double Dragon: The Ultimate Team.

The Sega Genesis handled all of the preloaded games and cartridge games with ease. There weren’t any instances of slowdown or any other type of graphical glitches. The console also handed all the audio perfectly, even if it is all mono sound.

My only gripe with the AT Games Sega Genesis is its controllers. I haven’t had any problems with the design of the controllers, and several of my friends have told me they are exact replicas of the old ones, minus one difference, the controllers are wireless. This is where the problem starts. These controllers use infrared for their wireless signal, which means I had to make sure the controller had a clear line of sight to the Genesis at all times. This may not seem like a huge problem, but even titling the controller up to hold it vertically (which is how I hold controllers) can cause the signal to be lost. Fortunately, the Genesis also comes with two ports for wired controllers, which I’ve found online for anywhere from $6 to $10. I’ll probably end up picking up a couple of wired controllers, if only to save on AAA batteries.

When I saw this console sitting in Family Dollar it was going for $40, which isn’t a bad deal since it’s loaded up with 40 Genesis games. Online I’ve seen them go for around $50. I still think this is a good price for the console and would be willing to pay it. I also saw a portable version of the Sega Genesis by AT Games that came loaded with games and had an SD card slot. I’m thinking about picking one of these up too; if I do I’ll give it a review.

I’m really happy with my new Sega Genesis. The preloaded games are an awesome feature and come with a wide variety of great games. I also love the fact that I can plug old cartridges into the console. My main complaint is the controllers, but the ability to switch them out for original Genesis controllers makes up for this fault to a degree. At the end of the day, I’m really satisfied with the console and think it is easily worth the $40 to $50 price tag.