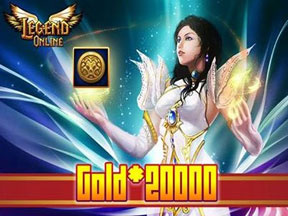 Or, Conquering A Pants-Free Kingdom

The game opens with a choice of hero and character class. I first chose the female spellcaster, because girl. She’s wearing calf-high boots, and an open coat over her thong, but I figured I could find her some pants once we entered the magic land.

I was mistaken. This is a pants-free kingdom.

Good game design is often described as a series of meaningful choices, but it was hard to find either meaning or choice in Legends Online. I was level 7 or 8 before I got to do something besides tap where the blinking arrow pointed in a tutorial. Although, with player instructions like VIP can CD for Free and Click the Army button (while pointing to a button labeled ‘Troops’), plus loads of different loot, I needed all the typo-ridden explanation I could get.

I’m not sure if the in-game and premium currencies are intentionally obfuscated, but with rewards and payments in Gold, Souls, Dia, EXP, loot, and some kind of pink ticket-y thing, the explanation is needed.

For example, ‘recharge’ is used both for the regeneration of mana and health in battle, as well as for the purchase of Dia currency. Is the ‘First Recharge’ mission misleading by intent or from a lack of proofreading? My second time through, playing as a pants-wearing male ranger, the tutorial seemed a bit excessive.

Single-player battles are unpleasantly hands-off. A player’s success in single-player combat is based on upgrading powers and choosing sidekicks before the battles, so actual combat is mostly watching attack animations and occasionally choosing a special attack. (There’s an Auto mode, in case throwing the odd fireball is too much effort.) Legend Online seems aware that players are zoning out through the set-and-forget battles, and attempts to combat lack of interest by offering the end-of-dungeon rewards on a timed countdown, so players multitask at their peril.

Like in most RPGs, heroes gain money, armor, weapons, and treasure as they defeat enemies. Players can improve their loot by crafting and inlaying gems, and honestly, if any part of the game required that seven-level tutorial, it’s the crafting system, not the click-to-fight battles. It’s worth noting that while my bikini mage looted and wore several sets of more powerful armor, she never found a shirt or a pair of pants, and her thongtastic character art never changed.

In addition to battles, Legend Online has a click-and-build city to maintain. City builders can get a lot of hate as repetitive, spreadsheet games, but I find upgrading buildings for better production and better battle stats to be straightforward and satisfying. Although the constant missions to rush X number of buildings didn’t exactly endear it to me.

There’s quite a bit of content before free progression is blocked in this freemium game, and even then I was given a choice of paying or coming back later, rather than a shakedown. I was level 16 before I felt like I needed to pay in for a better play experience. Then again, the first 7 levels are literally tapping where the green arrow points.

That doesn’t mean the players can ever forget it’s a freemium game. A ticker about a third of the way down the screen frequently pops up, displaying adverts for premium purchases. When we talk about bad freemium design, we usually mean feeling cheated by the inability to progress or paid power-ups that unbalance the game. Bad freemium design, I’ve discovered, can also mean an advert that appears and covers the menu in use, making it impossible to continue until all the various benefits of VIP status have scrolled across the screen.

There are some good points in the game. I sincerely hope the writer who named one of the enemies ‘Cowardly Git’ gets a raise. Or possibly a new job.