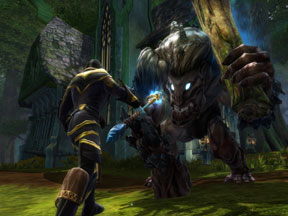 What do you get when you mix R.A. Salvatore (veteran fantasy author), Todd McFarlane (creator of Spawn), and Ken Rolston (lead designer for Morrowind and Oblivion)? Other than a brainstorming sessions I would kill to sit in on, you get Kingdoms of Amalur: Reckoning, the latest fantasy style RPG. You also get an arguably groundbreaking title in the RPG genre in terms of gameplay and storytelling, allowing newcomers to easily pick it up and play, or veterans to have enough content to keep them satisfied.

With a writer like R.A. Salvatore, you would expect the story behind Kingdoms of Amalur: Reckoning to follow along the same lines as most of his tales; epic, deep, enjoyable, but most importantly, a work that describes a journey not only through a fantastic mythical land, but inside the characters themselves for discovering who they are and/or what their place is in the larger universe. You would be right to expect this as that is exactly what you get.

Kingdoms of Amalur is set in typical fantasy world, filled with warriors, rogues, sorcerers, trolls, goblins, and many other creatures and archetypes made famous by writers such as J.R.R. Tolkien, C.S. Lewis, and of course, R.A. Salvatore. You play the first mortal successfully resurrected by a devise known as the Well of Souls. As an individual brought back from death itself, you soon find out from the Fateweavers, people who can read the Threads of Fate and see how people will affect the world around them as well as their own fate, that your destiny is a mystery, unseeable to them. You also discover that, being separate from the Threads of Fate, you have a very unique and sometimes dangerous effect on any whose path you cross. Those you save from death can now have a life and produce generations that would never have walked the planet. Those you kill will never affect those they were meant to interact with; never have offspring to produce generations to come. This catches the attention of the Tuotha, an evil race bent on destroying everything in their path. You and any friends you make must find out what they want with you and why. However, you must choose what path you take, destruction or peace, villain or hero, Ric Flair or Sting (wrestling pun).

The writing is nothing short of great. Not surprising with such a veteran writer at the helm. Salvatore shows not only his skill but his experience with this genre as he weaves a deep and complicated tale together, encompassing not only the main storyline, but each character and side quest as well. Each characters’ dialogue ranges from relatively interesting to highly intriguing. The writers do a fantastic job of making each character feel important. No one seems to just be taking up space.

The conversations feel natural most of the time, but occasionally you may find yourself reeling from the shear amount of things some people have to say. Thankfully the voice acting is very solid. Not only does it fit each character, it never feels strained or pushed too far. This is a very good thing considering each character has a lot to say.

Conversations themselves range from a list of dialogue options for learning more about something, to a dialogue wheel similar to that of the Mass Effect series, allowing for answers stemming from different types of personalities and play styles; from helpful and calm, to forceful and aggressive. The dialogue wheel, like in other games that feature it, helps to move the conversation along in different directions depending on what you pick.

As you may have guessed, the main objective of this game is completing quests to gain experience in order to level up your very own created character. Leveling up gives you quite a lot of abilities to choose from, each adding to and complementing your chosen play style. Might gives you access to abilities that make you much stronger with swords and hammers, and also gives you abilities that increase you overall strength. Finesse is the rogue’s abilities, letting you deal more damage with daggers and unlocking special techniques that allow you to dash at high speeds dealing a lot of damage. Sorcery gives you magical abilities and boosts to your magic.

As the story suggests, your character has the ability to change their fate and choose how they live. This concept echoes within the gameplay itself. Kingdoms of Amalur encourages you to mix and match when leveling and shaping your character. Going full warrior/rogue/sorcerer is fine and can be fun, but the real joy is in creating a mix of the two (or three) and setting him upon your enemies.

With a writer like R.A. Salvatore, if wouldn’t be unreasonable to think that Kingdoms of Amalur: Reckoning’s strengths lie within its story. While the story is great, it pales in comparison to the exemplary gameplay, something most epic, fantasy RPGs slightly miss the mark on. Even great games like Dark Souls and Skyrim, whose combat is certainly fun, don’t hit the target quite like this. Their combat is not their strong point, but more a fun way to advance the story or progress to the next challenge. Kingdoms of Amalur, on the other hand has you begging for enemies to cross your path just so you can dispatch them in your own creative ways. Without a doubt, Kingdoms of Amalur presents some of the most rewarding combat I’ve ever enjoyed.

In my opinion, the bar has been set for combat in the RPG genre. Primary and secondary weapons, along with magic, can be used interchangeably, allowing the use of some very unique and rewarding combos. I equipped some quick daggers as a primary weapon and magical chakram as my secondary. Typical approaches to combat had me getting in close and slicing up the enemies with my daggers, then whirling my chakram at enemies coming up from behind, all interchangeably, allowing for some nice close/midrange combos. For good measure, I’d fire off some lightning magic at enemies far off, just because I felt like it.

Take note, however. Perfect is something Kingdoms of Amalur: Reckoning is not, and the main faults, at least in my eyes, come during the most rewarding experience, the combat. The camera is extremely unreliable and can turn into quite an annoyance, even resulting in your death if you don’t keep your eye on it. Hit recovery is awful as well. If you take a hit from the enemy, your recovery time will leave you incredibly vulnerable, leading to the enemies taking advantage causing a lot of damage. If fighting several enemies at a time, getting hit once may mean the death of you. Finally, the dodge mechanic is at most, useable, and at worst, atrocious. Partly the camera’s doing, you won’t always dodge the way you want, and when you do, you may either run right into an enemy or an unseen obstacle, both of which will stop you dead in your tracks. Once you finish cutting your teeth on the combat, these annoyance seem to come less and less as you learn to either cope or work around the faults. With or without them, the combat stays rewarding and fun, with just a pinch of frustration from time to time.

Stepping away from the combat, the environment, character models, and artistry ring of something very Fable-like. Instead of extreme realism, the environment, much like the combat, is built to complement the gameplay and story, which it does well. Environments may not look hyper realistic, but they are still beautiful to look at. However, this also means that the character models are a bit goofy and underdeveloped at times. Though charming in their own way, they look awkward at times. With the beautiful environments I would have liked equally appealing character models.

As far as open worlds go, Kingdoms of Amalur: Reckoning has a pretty large one, but confined at the same time. This isn’t like Skyrim where if you see it, you can go there. In Amalur, anything more than a foot tall in game will act as an unscalable barrier. The same is true for drops. There are a few ledges that are meant to be jumped from, but most, again act as barriers. The world itself within the barriers, however, has much to offer. Stray from the main storyline and you find plenty of interesting side quests and some very compelling factions to join. Completing these quests not only offer great experience, but some give you irreplaceable rewards and benefits, not to mention the interesting story you get to play though during the quests themselves.

As I said earlier, the bar for gameplay, specifically combat, has been set high for this particular genre. Combine that with an enjoyable and compelling story, along with loads of content and secrets to explore beyond the range of quests, and Kingdoms of Amalur: Reckoning is a game that hits all the marks.

It may falter in certain areas, such as framerate issues that can be all but fixed by installing the game to your harddrive, but it doesn’t let those faults slow it down. Make no mistake; this is not the RPG that will tide you over until the next big name title comes around. Kingdoms of Amalur: Reckoning is what many RPG enthusiasts have been waiting for. It’s here. Time to enjoy it.