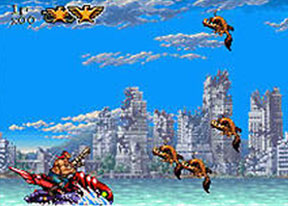 For a long time I wanted to say "oh how the mighty have fallen." Who could forget what happened to Konami’s Contra series? When it was out on the NES and Super NES, and to a lesser extent the Genesis, Contra was one of the greatest shooter game series ever made. Aside from one non-canonical release in Contra Force, it was non stop shooter insanity and some of the most difficult games I had ever play, especially Hard Corps on the Genesis, an appropriate title if I ever saw one.

But then something happened during the Saturn/PlayStation years. The Contra series was shifted over to an external developer in Appaloosa and it was never the same. Going 3D was the worst thing that could happen to such a great series. There was some redemption when Shattered Soldier came out for the PlayStation 2, retaining the 2D gameplay and insane difficulty but Konami didn’t listen to it’s fans, and released a Smash TV clone called Neo Contra that again did not play at all like the original series that we loved.

It got to the point that I referred to all the pre-3D Contra games as the "Real Contra," and that’s how it will always be. I was surprised to see that Konami finally listen to its fans by announcing a return to "Real Contra" with Contra 4 on the DS. Even though it again is being developed by an external developer (in this case, WayForward,) I’m proud to say that they are passionate about the "Real Contra" formula and have created a game that easily rivals that of the best of the series, and all I can say is, it’s about darn time!

Set two years after the events of Contra III: The Alien Wars, Red Falcon may have been dealt with once and for all, but that doesn’t stop his buddy Black Viper from attacking the Earth, and it’s up to our heroes Bill Rizer and Lance Bean to load up their guns are head to where it all began, Galuga Island to stop the madness for good.

Yes the game is classic Contra the way it was meant to be. It’s nonstop shooting across nine stages, but the best part of the series is it combines the best of all the games. The side scrolling action of the original Contra, the base stages of the original Contra, the dual weapons of Contra III, the powering up of weapons from Super Contra arcade, and even the insane bosses of Contra III and Hard Corps. WayForward did their homework, and it shows.

And of course, there is the difficulty. Yes, "Real Contra" has always been hard, and if it weren’t for the original 30 man "Konami Code," I never would have beat the original on the NES. But Contra 4 takes the difficulty and amps it to insane levels, hence the difficulty level should be listed as "for masochists only." It’s a very difficult game, and in fact by playing in Easy mode, you won’t even get to see the last two stages! So there.

Even better is all the unlockables that can be found. By completing Challenge mode which features 40 tests of skill and courage, features such as new characters and artwork can be accessed, as well as NES perfect versions of the original Contra and Super C! Three great games in one package, almost a portable version of the Orange Box!

There are some issues though that are a result of the DS’ dual screen. When doing vertical stages such as the latter half of stage 2 (a tribute to the original’s waterfall stage,) bullets and enemies can be lost in the partition between the two screens and can lead to some points of frustration. But it’s not as much of an issue during the horizontal screens.

Graphics wise Contra 4 looks like the 16-bit classics but as always that’s nothing to cry about because it still looks amazing. The character animation is some of the smoothest I have ever seen in a 2D Contra game, and could even rival that of Alucard in Symphony of the Night.

The base stages are now in complete 3D but unlike past Contra experiences in 3D, this feels true to home.

Sound is equally amazing. While the regular sound effects are standard Contra fare, the music is very impressive, and some tracks even have a feel of the classic series! Even the first stage when playing in Hard mode plays a remix of the original’s Jungle theme.

I do admit some of the voices are a little cheesy. Constantly hearing the line "Lock and Loaded," while being taken from Hard Corps, almost reminds me a bit of Duke Nukem, and until Forever ever gets released, that’s the most we’ll hear of it.

Real Contra is back! That’s all I can say. I don’t know who WayForward are, but they better be responsible for any future Contra titles because they actually made a system known for brain games and Pictochat now accessible to hardcore gamers. That in itself is worth the cost of admission.