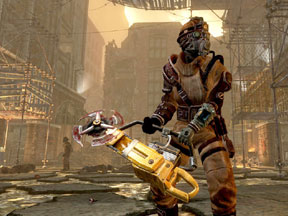 So we all know that Fallout 3 is a hit. In the Gameindustry.com Game of the Year voting, it ended up with more votes than any other title in the contest which helped it wrap up not only the Overall Game of the Year award, but also Best RPG, Best Environment and Best PC game.

By now, a lot of people have already solved the game and quite a few have gone back through and played more than once, which is certainly a possibility given the vastness of the wasteland and the depth of character creation. But if you want more fun stuff, there are the downloaded content packs (DLC) which for just a few dollars, can add missions and monsters to the already robust world.

The first of these was Operation Anchorage, which was a little bit of a disappointment given the highly linear nature of that DLC. Now however, we have The Pitt, which take us up to Pittsburgh, a city just northwest of our beloved Washington DC wasteland. Although it somehow survived the nuclear destruction without a single missile hit, it almost has more problems these days than most places that took direct shots. The Pitt is ravaged by disease and pollutants. They even have their own form of mutants, which start out as human and slowly degrade into wildmen, which are basically lunatic savages, or Trogs, which are gibbering monsters with only a hint of their former humanity. Even the Brotherhood purge of the city could not stomp out the sickness there.

The new DLC starts out pretty much like the Anchorage one, with a mysterious radio signal that draws you to an out of the way spot in the wasteland. Once there you will meet your contact, who tells you that The Pitt is basically a huge slaver camp where overlords watch over a pitiful population forced to work the steel mills until they die of exhaustion. But there is hope. A cure for the constant mutations has been found, but the slaves need someone from the outside to get it for them, so they can bargain it for their freedom. Or so you are told. This will entail you disguising yourself as a slave, and embarking on a series of dangerous missions inside The Pitt.

The first stop is a train tunnel where a pump cart will take you to The Pitt. Of course the area is guarded, and I was happy to find that the slavers there recognized me as "that guy who shot up Paradise Falls" and immediately attacked. I’ve never been friendly to slavers, and it was nice to be recognized. After dispatching them, it was off to The Pitt. Your companions will leave you at this point, going back to their default meeting spots. So you can’t take Dogmeat or Fawkes with you. In fact, once you elect to start The Pitt, you are going to pretty much be stuck there until you finish. So plan accordingly.

There is a little adventure upon arrival, but basically your mission is to get into The Pitt proper, which means you will be stripped of all your weapons and given slave clothes. You can elect to hide either a gun (small .22 caliber handgun) or a knife, but everything else is stripped from you. It was actually refreshing to be almost starting over again, though you keep your skills of course. And eventually you can get all of your equipment back intact. But for a while, you are just a slave.

Playing as a slave in The Pitt is pretty cool actually, and you really get a feel for the oppression as the overlords beat and murder those around you, and threaten to do the same to you. Eventually you are given a few moral choices (something that was absent from the Operation Anchorage expansion) and can choose to side with the overseers or the slaves. But after spending time with the slaves being brutalized, I can’t see anyone really choosing to help those evil overseers. I quietly took names and bided my time, knowing that I would eventually extract sweet, sweet revenge.

The Pitt feels like a real place. It may not have the landmarks that the DC wasteland does, but there are factories belching smoke and a real society, complete with their own monsters and even weapons.

You go on a series of missions and even get to do some arena fighting, which was a heck of a lot like Oblivion, and eventually can ultimately do well or not so well for The Pitt. Even if you try to be all good, you still have to make some questionable moral choices along the way, which is very much like the Fallout 3 game, so The Pitt never looses that flavor.

My only real complaint about The Pitt is that it is very short. It only took me about four hours to complete the entire thing, and I was doing the tourist thing and wandering around, taking on every side quest that I could find. You could probably run through it in under an hour. I took a half gem off the Value grade because of this, though The Pitt remains solidly worth the money.

One of the coolest things about The Pitt is that once it’s over, you can still do a couple "ongoing" quests. One of them involves an extremely fun zone called The Steelyard where you will be hunting for steel bars. Think of The Steelyard as an Easter egg hunt, with monsters and crazy people trying to kill you at the same time. The Steelyard is a huge zone that is as tall as it is wide. You will find yourself on top of buildings, running up and down old conveyor belt systems and even moving through an old factory complete with monsters and traps. You even get to go higher up than anywhere else in the Fallout 3 universe, at least higher than I’ve ever been. Don’t look down in a couple places!

You have to do this a little bit for the main quests (to find 10 bars) but can come back later to explore the entire area, plus the whole Steelyard is not accessible at first, but opens up later on. It’s a deadly hard place when you don’t have any equipment. You can scrounge some weapons, but need to make every bullet count.

There are even things like protection bots that a skilled science whiz can activate to get some allies, so all your skills can find use in The Pitt.

For every 10 bars you find beyond the main mission goals, you can trade them in for rewards of unique items not found anywhere else in the game. The best of these, as far as I’m concerned, is called the Metal Blaster. Basically someone put prisms into a standard laser rifle so that it fires multiple beams per shot. It’s a laser shotgun now, which when repaired to full (which can be done using standard laser rifle parts) does more damage [50] per shot than a sniper rifle. Boy I have fun with that weapon, turning people into ash in one surprise shot.

So after a slight derailment with Operation Anchorage, Fallout 3 returns to glory with The Pitt. The DLC maintains the perfect balance of combat, role-playing and moral dilemmas to keep any hardcore wastelander happy. Purchased from Microsoft Live for $10, it’s money well spent.