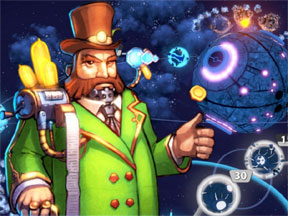 There’s no feeling quite like going to a museum and staring at the dinosaur exhibits. Seeing the skeletal frameworks of long-dead creatures is a stunning site no matter how old you are. Yet the midst of these awe-inspiring spectacles, it’s difficult not to wonder what the creatures would look like if they were still covered in living flesh, able to roam free again.

In much the same way, Planets Under Attack evokes the same feelings of staring at the ancient bones of a tyrannosaurus. Targem Games creates an excellent framework for its strategy game, but when it comes to adding flesh to the bones, the game leaves a lot to the imagination.

Planets Under Attack is fairly straightforward and doesn’t brutalize newcomers with a harsh learning curve like some strategy titles do. Each match or level consists of a variable number of planets which, as the name of the game suggests, players attack. The gameplay is deceptively simple, with a strong focus on where players allocate their resources.

Each planet has a population number attached to it, which doubles as its defensive rating and attacking potential. By selecting a planet, players can send 10, 20 or 50 ships to attack or defend it, depending on how well-supplied your resources are. Sending ships to a planet you don’t control costs money and population, during which time income generation halts. No such penalties exist for sending ships to defend a planet you already control, though.

Some planets can be upgraded to increase their resources and bonuses. For metropolises, upgrading increases population ‘ subsequently improving defenses and income generation. Space fortresses, on the other hand, get increases in range and firing rate, making them critical strategic territories.

That may seem like a lot to digest, but the game’s learning curve is only about 15 minutes, and the mechanics don’t change much throughout. What does change, however, is the layout of the game board. Obstacles, such as asteroid belts, can cause players’ ships to take a prolonged route to planets. Those seconds can make a huge difference since planets lose an upgrade level each time they change hands.

There’s another aspect to the game board that makes Planets Under Attack even more challenging at times: moving planets. This isn’t much of a problem in the early stages of a game, but as more and more planets come under opponents’ control, a once strategically placed planet can quickly become an isolated liability.

Most games start out the same way. Players begin with at least one planet against up to three other opponents. The first step is to pick the planet you want to attack ‘ usually a neutral one ‘ and send out your ships to capture it while at the same time upgrading the planet you started with. Depending on the circumstances, the game then becomes about waiting for enough resources to generate or continuing to attack.

This is where Planets Under Attack starts to show its lack of depth. The game has no defensive strategy to speak of. Whether attacking or defending, sending out ships will pull population from the closest available planets, meaning that aside from its population ranking, a planet isn’t actually able to defend itself.

There’s nothing wrong with rewarding aggressive play in a strategy game, but Planets Under Attack doesn’t just reward aggressive play; it forces you to play that way. The end result often turns matches into a chaotic scramble to identify weak planets and gobble them up as quickly as possible.

Despite its repetitious nature, the variable game boards go a long way in making each match feel unique. Adding a further layer of customization, Planets Under Attack also sports RPG-like bonuses. Players can have three different bonuses active at one time, with new ones unlocking after each campaign level. These augmentations do everything from increasing income generation to ship damage.

Unfortunately, each single-player level seems to be designed with certain bonuses in mind, again forcing players’ hands instead of allowing for different strategies. One tip on a loading screen even encourages players to change their tech bonuses if one layout doesn’t work, almost as though the developers anticipated certain levels being suited for a particular setup.

As a side note, there is a robot faction players can use during skirmish and multiplayer modes. With some minor differences, they function similarly to the humans.

Although Planets Under Attack doesn’t realize its full potential in the gameplay department, it shines when it comes to the graphics. Part quirky cartoon, part beautifully generated galactic arenas, Targem Games does a magnificent job creating an art style that’s difficult to peel your eyes from.

In a game which could easily consist of empty, black space, the developers adroitly use a massive color pallet, causing planets to practically pop from the screen. What’s most impressive about the graphics isn’t the intricate level of detail ‘ most of the game is played zoomed out ‘ but the way everything on-screen seems to coalesce into one cohesive setup. Even the spaceships, which are effectively just small, colored triangles, fit perfectly into the visual display.

The sounds of laser blasts and explosions also blend in nicely with the visual elements, adding a level of charm to the game’s overall style. The voice acting during the campaign’s story ‘ which only exists to explain why planets are under attack in the first place ‘ is lackluster at best, though.

Targem Games deserves a lot of credit for what it’s put together. In making Planets Under Attack, the developer has managed to craft a solid strategy game with a brilliant foundation. While the game doesn’t fully develop its potential, there’s still a lot to like here. And with such a solid framework to build from, I wouldn’t be at all surprised if Planets Under Attack sent Targem Games high into the video game stratosphere.