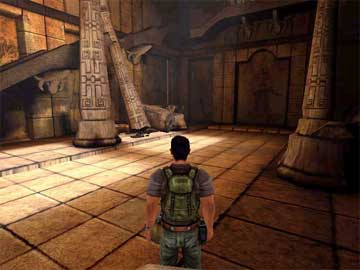 Traitors Gate 2 is almost two games in one.

Let me explain. The premise of the game is essentially that terrorists from Unnamed Middle-Eastern Country (TM) have developed a computer virus that could knock out every computer system in the world, or some such nonsense. As Agent Raven (remember him from the prequel?), you must infiltrate their installation, copy the virus, and destroy the research. Since a direct assault is out of the question, you must go through an ancient Babylonian temple which happens to have a back entrance into the facility.

So, in essence, you play one type of game going through the temple and negotiating its ancient puzzles and traps, and another entirely as you work your way through the terrorist stronghold. Both involve logical solving of puzzles, but the feel of the two parts is such that it almost seems as if you have played two different games.

You are given all sorts of high-tech gizmos with which to accomplish your objective. One gizmo they don’t give you, much to the chagrin of my editor no doubt, is any kind of gun. In the original Traitors Gate, there was a very good reason for this, as you were up against Beefeaters and other British government employees, and an international incident would have been good to avoid. In Gate 2, we are dealing with terrorists, so why couldn’t we have a silenced pistol? I’m sure they had some sort of contrived excuse, but I must have missed it. Being a Meier-ite from way back, I welcome the chance to overcome obstacles without resorting to violence, but it would have been nice to have a plausible in-game reason, like in the first game.

Unlike the original, in Traitors Gate 2, you actually get to see Raven in action, due to the third-person 3D environment. Unfortunately, with the freedom the 3D environment provides comes the increased complexity of controls. Simply put, it can be very difficult to maneuver Raven around and get him to do what you want. You have to use the arrow keys on the keyboard to move him forward and back, and rotate him (almost painfully slowly) left or right. Or you can use the mouse, which will have you doing really fast pirouettes, which isn’t really as much use in this game as one might have thought. While you are spinning around, the camera doesn’t always follow you, but snaps into place behind Raven’s head when he moves. This is quite disconcerting at times.

One type of puzzle that will make you regret this interface is the timed variety. One in particular is almost completely impossible because of the crappy controls. You are supposed to turn a wheel, turn around, and run to a platform that is rising up. If you turn with the keyboard, it will be to slow and you will miss it. If you use the mouse, you could run off in a random direction and still miss it. Prepare for potentially hours of frustration when you reach this, or you may just have to find someone out there with a saved game that is past this point.

Unlike a lot of puzzle games, if you screw up at certain points, you die and your game is over. There are poisonous snakes in the hallways, and just brushing by one is certain death. All I can say is: save early and often!

The temple puzzles that aren’t based upon how fast you can manipulate the controls are quite clever. All I can say about them is, the keys to solving them are all about you, so just pay attention and take notes. The puzzles in the installation portion are the more everyday sort of common sense puzzles, like "which air vent should I put the gas grenade in to get the greatest effect?"

You are given the notes of the last archaeologist to study this locale, and it is chocked full of information you can use to solve the puzzles in the temple. It is a very long read, and the actual game-useful information is rare, but it’s not a bad read and, who knows, you may learn something about ancient Babylon that you didn’t know (which in most of our cases is probably everything).

The textures are well-rendered, but at times the 3-D modeling can be blocky. At one point I stood next to what I knew was a secret door that I couldn’t figure out how to open. I turned around"and found myself on the other side! It was a very weird experience.

The sound effects are quite realistic, with grinding stone and so forth. The music is hardly noticeable, but it is fitting to the environment and it changes theme when you go from the temple part to the terrorist part.

Traitors Gate 2 is an entertaining piece of work that is up to par with the games The Adventure Company has been putting out lately. Although it has some interface problems, the puzzles make this game definitely worth any solver’s time. It earns a respectable 3.5 Gems.