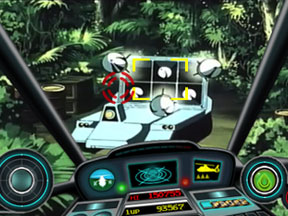 Who would have ever thought that the iPod of all things would be the perfect place to recreate the old laserdisc games of the 80s?

For those of you who don’t remember what these games were, laserdisc games, or more commonly known as interactive movies, were played on a laserdisc player and control was done by simple joystick motions or button presses at precise moments. Make the correct move and the movie continues playing as it should. Make the wrong one, and the movie cuts to a death scene. They were almost like the virtual equivalent of the "Choose Your Own Adventure" children’s books that were popular during the same time period.

Dragon’s Lair, while not being the first laser disc game (that title would go to Quarter Horse,) is the most successful. Since coming out in the arcades, it has been on almost every system out there. CD-ROM players, DVD players, Blu-ray players, and even the Game Boy have received a version of that laserdisc classic.

And now it looks like the iPhone and iPod touch are the latest breeding ground for these lost hits. We’re already seen Space Ace (the pseudo sequel to Dragon’s Lair) make a successful translation to the touchscreen (courtesy of Digital Leisure,) and Dragon’s Lair is out now too.

But the truth is, I didn’t have interest in Dragon’s Lair when I was young. There was actually a much lesser known laser disc game that I was a huge fan of.

My local arcade had a game called Cobra Command that was far more advanced than the simple movements based in Dragon’s Lair, and just from watching the attract mode, I was hooked. I played it for the first time, where my first mission was the Pacific Fleet. I couldn’t even get a single missile hit on the first cruiser. That’s how bad I was.

Eventually I started getting better on some of the other missions, especially New York and what I now call, Desert Storm. Keep in mind, this game was released in 1984 while Desert Storm took place in 1991. Those missions were so easy for me.

But there was one mission that I always dreaded, one that struck fear in my heart because of the fast aerial attacks and near precision controls I had to master"it was Rome. I prayed every time I dropped my 50 cents in the machine, that I would not hear that intro of "terrorists in the ruins"watch the planes!"

Sadly, the arcade Cobra Command machine my arcade had died a few months later, a commonality of the laserdisc games, and aside from its limited playability, led to their downfall. To make matters worse, there was also an inferior, Choplifter based side scrolling shooter also named Cobra Command released in arcades and the NES four years later, nothing at all like the LD original.

It would be in 1992 when I would finally play my favorite LD game again"on the Sega CD. But with its horrible frame rate, washed out colors, and butchered sound quality, it was nowhere near the game I remembered. So once again, with the exception of a couple arcade plays while at E3, I had to wait another 17 years for a chance to play Cobra Command at home.

Enter Revolutionary Concepts, an Australian based developer of iPhone and iPod touch apps. For their first major release, they acquired the rights from G-mode (who obtained all of Data East’s intellectual properties after DE filed for bankruptcy) to create an updated version of Cobra Command, and for that, all I have to say is"THANK YOU!

Thankfully in this case, updated doesn’t mean completely redone. This is still the same ten mission blastathon that I enjoyed in the arcades. Shooting down enemies is still the same as before, place your gunsight on the targeting icon and fire in time with the correct weapon (guns for aerial targets, missiles for ground but can also be used on aerial) before they shoot you down. But here lies one of the first updates available. In addition to the classic targeting system, a newer system actually shows how quickly you have to react before getting shot (a la Virtua Cop) and even displays the target’s hit points. Genius!

But Cobra Command was not just shooting; it follows the tried and true laserdisc formula of moving the joystick at just the right time. This time, however, controls are tilt based. Just tilting the iPhone or iPod touch in any of four axes will react the same way a joystick would. This actually makes targeting EASIER, and in some stages, especially Rome, this is a much welcome update!

But even with these updates that doesn’t make the game a breeze to get through. Even on easy mode the game is quite a challenge. In fact, as of this writing, I still have to finish the final mission, and I’m currently holding the top worldwide score.

Oh wait, I forgot to mention that. This version now includes leaderboards, something we never expected back in the laserdisc era, not to mention achievements. That’s right, this rivals Xbox Live territory. Achievements start off pretty simple such as getting your first gun or missile kill, but get insane with achieving the rank of Top Gun on all ten missions!

I know I’ve mentioned how disappointed I was with the visuals of the Sega CD version. Not this time. This is the actual footage from the arcade laserdisc we are dealing with, remastered in H.264 to take advantage of the iPhone OS’ playback capabilities. Even better, since we are dealing with the game being stored on flash memory as opposed to a laserdisc, there is no seek time delay to slow down in the game. You might see a mistimed frame on occasion, but it’s not an issue for me.

As with the arcade version, the virtual cockpit is overlaid onto the video, but is actually dynamic based on the accelerometer. Same can be said about the sound. We have the original arcade soundtrack back the way it was meant to be, remastered for earbud use.

The surround is amazing. I know Digital Leisure released both Dragon’s Lair and Space Ace on Blu-ray, but as far as the iPod is concerned, the excellent Space Ace conversion aside, this is the closest I could get to that.

If there is something to complain about with the game, it would have to do with the control. I admit I’m not the biggest fan of touch-based thumbsticks (*cough* Pac-Man Championship Edition *cough,*) and there are times when the controls in Cobra Command get a little sluggish and non-responsive. It doesn’t do it too often, just once in a while, and since this is the initial 1.0 release, I’m sure that it will be fixed with future updates. The fact I’m playing on a first generation iPod touch is also a factor.

Needless to say, 25 years after the original game was released and became one of my favorite arcade games, I finally have a perfect conversion on my iPod touch. At $5, this is one of the better iPod games out there, and a must for fans of laserdisc games. However, I do have one request for Revolutionary Concepts. Since you guys are releasing Data East’s laserdisc games to the iPhone, when can we have Road Blaster FX, or as Sega CD owners knew it as, Road Avenger?

CONS: Touch control can get touchy on occasion. Even the normal difficulty can be too hard for some.