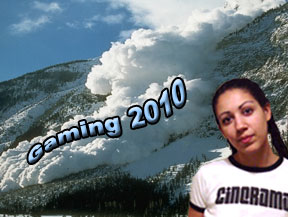 Usually Christmas offers a glut of games and the long break between the big day and New Year is spent in player's heaven. 2009 was a different kettle of fish though. MW2 saw to that. All our Quarter 4 titles were pushed back to 2010 and now release dates are looming, and I've still got a small matter of Mass Effect to clear out of the way before ME2 hits the shelves – urk!

I must admit, I'm a little behind on my gaming at the moment. I'm blaming Assassin's Creed II because it's just so good. Don't think that I've been slacking over Christmas because I've actually been gaming harder than the rest of the year put together. ACII was on every day, for extended periods (except for Christmas itself, obviously – turkey doesn't cook itself you know).

Sometimes it's great to be proved right and this is one of those times. I knew AC had a great game in it, waiting to blossom and lo and behold, ACII was born. There are just so many things to collect and I want to find them all. I'm one seal away from Altair's armour, my villa is looking like something out of Homes and Gardens, and the secret of the codex is almost mine.

While I've been collecting every feather from here to Tuscany, the original ME is still in the "to play" stack under my telly. The holidays are over now, but I've got some serious gaming gut to start busting. Somehow, I don't think I'm the only one in this situation. Early 2010 looks set to offer us an avalanche of solid gold releases, but that's putting pressure on our wallets and our time.

Sometimes it's hard being a gamer. Here are the incoming for early this year that will be fighting for screen-time over the next month.

This needs no introduction, unless you've been lost in Wii world or something. It's the next sprawling, life-consuming episode of the fantastic ME. Due out on 28 January, this one is dependent on me finishing the first one. Oh, god, dig deep – I can do it.

Now, this one has crept up on me, the fiend. There are always a slew of chicks wielding weapons, so I just put this one in the Heavenly Sword-alike category. However, the more I see and hear, the more I must have it. It's by Hideki Kamiya, the man behind Okami and the director of the original Devil May Cry for heaven's sake – how could I resist!? Release is this week 8 January, so that may have to be purchased post-ME.

Finally PS3 owners have something to be smug about. I'm not a PS3 owner, but if I was, this one would be up there with ME2. It's all about the narrative. Can they pull it off? I sincerely hope so. We'll have to wait for our own Mr. Breeden-recent-PS3-owner to give us the verdict on this one, but he'll be busy playing ME2 for at least ooh a weekend (he has some crazy game finishing skills). Still no confirmed date in the UK, but rumour says 28 February.

For those that like a slice of horror with their gaming, Bioshock 2 is a must buy. For the sake of my bank balance and the possibility of having a social life I might have to let this one slide for another day. There's always the cunning persuade-boyfriend-to-buy-for-PC ruse, which could be a winner come 9 February.

There are more big hitters due for release soon, but that's four in the space of as many weeks. Add to that Final Fantasy XIII, for those of us who aren't Todd Hargosh, Splinter Cell: Conviction and Star Trek Online and you've got one hell of a post-Christmas schedule. The question is, do we try and play them all now, or hold some back for that mid-summer lull? I'll leave you to decide, it's back to Venice for me.

Most wanted: a bit more time and money