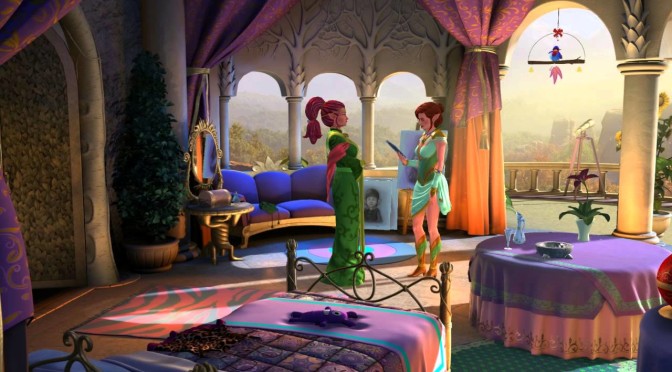 The Book of Unwritten Tales 2

Point-and-click adventures are having a bit of a renaissance and The Book of Unwritten Tales 2 is a solid entry. The only trouble is it’s a comedy, which riffs off gamer and nerd culture, but I just don’t find it very funny. It just serves to remind us that you can’t make all of the people laugh all of the time.

As the ‘2’ suggests, this is a sequel, but you don’t have to play the first one, to jump right into this adventure. This is a fairly standard fantasy adventure with its tongue stuck firmly in its cheek. Think Terry Pratchett, with nods to Lord of the Rings, Game of Thrones and Monkey Island thrown in at every turn. Some gamers may enjoy trying to spot all the nerdy clues and references, but I just found it a bit trying.

The Book of Unwritten Tales 2 starts with Ivo, the elf princess, who has been locked in her room by her mother. She is betrothed to someone, but wants a life of adventure, rather than crowns and privilege. The other characters are Wilbur, a gnome mage, who becomes the main hero, in an obvious nod to Tolkein. Nate is supposed to be a Han Solo style loveable rogue, but frequently fails on the ‘loveable’ bit. He is accompanied by a pink, hairy creature, called Critter, who speaks in gibberish and looks like a Muppets reject.

The four characters described, will be familiar to anyone who played the first game. Unwritten Tales 2 takes place after the heroes have gone their separate ways, but events conspire to bring them all back together again. I haven’t played the first game, but playing through, you get hints of the previous adventure, with old characters constantly popping up, to give fans of the series those ‘ah-ha’ moments.

My main issue with The Book of Unwritten Tales 2 is that I don’t really like the characters. They’re not endearing or funny enough for me to want to spend 15 hours playing with them. Ivo is supposed to be the feisty female character, but it’s laid on so thick that it makes my eyes roll and Nate just isn’t funny, whilst Wilbur is a bit dim.

Although it tries so hard, this game just isn’t on a par with Monkey Island or the likes of Sam and Max. It takes more than just throwing in British regional accents to make something funny. It feels as if the dev team have looked at beloved point-and-clicks and tried to emulate them using the wrong formula. Added to this, the story is familiar and therefore fails to engage, instead relying on the gags to pull people through.

There are some nice moments in the game. While playing as Wilbur, you must travel back in time and the graphics take on a 90s style, with a midi soundtrack to go with them. The talking book exclaims ‘Great Scott’, which made me groan. Then we go further back in time and we’re in an 80s game world and Wilbur’s mouth moves, but there is no spoken dialogue. One more hop back in time and it’s a black screen with text explaining that we’re in a library. This is a nice bit of self-referential humour and breaks the fourth wall, which raises a smile, so it’s not all bad.

The Book of Unwritten Tales 2 looks pretty too. I like the almost World of Warcraft style graphics. The backgrounds are often beautiful, whether it’s the autumn leaves in an elven garden or the dark, brooding and inhospitable mountains, shrouded in mist. Interiors are detailed and interesting to look at, so  you never feel like you’re in the same place twice.

The puzzles are challenging without relying on crazy game logic to keep you guessing. Usually, the solution is logical, so you don’t have to put jam on the lightbulb and then stand in a bucket of milk to open the door. However, I got really tired of traipsing from A to D, via B and then back to A to use the key. It makes for really slow progress, in the beginning, which is helped by the quick-travel features later on. I often felt like the puzzles were just hoops to jump through and didn’t really serve the story. They were just padding to complete, before you got to the main story puzzles, which was annoying.

Bizzarely, the game really hits its stride by the last chapter. The more you play it, the better it becomes, but you have to persevere through the dull sections to get there and given the choice, I wouldn’t have bothered.