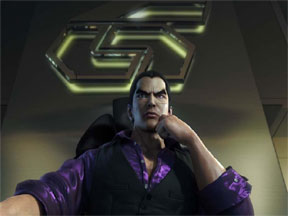 The Tekken series is without a doubt a great fighting franchise, with its fair share of quality titles. Back in 1999, Tekken Tag Tournament was released in arcades and eventually released on the PlayStation 2 the following year. This title boasted quite the roster, allowing you to choose from almost every character from the first three Tekken titles.

The main draw to the title, however, aside from the smooth gameplay that accompanies most Tekken titles, was the ability to choose two characters to take into battle and be able to "tag" them in to replace another character in the middle of the fight. Tekken Tag Tournament was very well received and it was only a matter of time before NAMCO BANDAI decided to try the formula again.

Die-hard Tekken fans will get a real kick out of this nice bundle of fun and newcomers will get to enjoy a classic game that is still very enjoyable, plus a preview for the next one.

Tekken: Blood Vengence is a complete CGI film included in the bundle. It follows long time Tekken character Xiaoyu and Tekken 6 newcomer Alisa as they search for a mysterious boy who may hold the secret to immortality, unaware that the bloodthirsty Mishima bloodline has plans of their own for the boy.

Though being a feature film based off a game about a fighting tournament, surprisingly, Tekken: Blood Vengence offers little in the area of actual combat, at least until the climax of the film. Blood Vengence focuses more on the plot of the film, following closely with Xiaoyu and Alisa. Though focusing on story is a great way to entertain the viewer, to rely too heavily on it for a fighting game-based film may not be the best move, especially when the story is so weak itself. The plot and characters seem rather disconnected at times, and the dialogue tends to bore at others. The CGI is wonderfully done and presents the combat (as little as there is) quite nicely, allowing for the signature hard hitting, slightly over the top Tekken feel. It truly is too bad that there are very few fights in this film. The lack of characters is the other downfall to Blood Vengence as many favorites (many characters period) are left out in favor of five or six to carry on the story. Tekken cast of colorful and unique characters is wasted in this film as you follow just a few on a long and often uninteresting journey.

Tekken Tag Tournament 2: Prologue is a slightly less disappointing item from this package. In typical demo form, you can pick from only four characters: Xiaoyu, Alisa, Devil Kazuya, and Devil Jin. Arcade mode is your only play option. You choose two of the four characters and you play against every possible two person combination of the four available fighters. Needless to say, gamers probably won’t be sticking with the demo long, due to the lack of options from not only playable characters but gameplay options as well. However, you are able to perform very nice and varied tag abilities with your partner by pressing the correct buttons simultaneously with the tag button. If nothing else, this will at least wet your appetite for the full game when it is released.

The true draw of Tekken Hybrid, however, is definitely the HD remastered classic Tekken Tag Tournament. Being based on the PS2 version of the game, all the old modes are available for play, from Arcade, Versus, Time Attack, Team Battle, and Survival, all the way to-yes, you guessed it-Tekken Bowl, a mingame that lets you bowl using Tekken fighters, each one having their own special skills. The game definitely looks and sounds a little dated, being over ten years old and having numerous other games improved upon after it, but the new HD visuals definitely add a fresh look to the game’s characters as well as its many and already well done fighting stages.

The controls are smooth techniques each character can pull off feels very natural, and very rewarding when they make contact. Though more recent Tekken games have improved upon the execution of moves, this title won’t give you any trouble in that department after a few matches.

Like all Tekken games, each character has their own unique fighting style. With the ability to tag in another character mid fight, this makes experimenting with different teammates very interesting. When you tag in, you can pull off special moves with your partner if the right combination of buttons is used. This makes for each tag to not only be rewarding, but devastating to the enemy and worth it to the player since the character sitting out at the moment slowly recovers health, making the player think about when and how to tag in or out. However, it is worth noting that the demo shows the tag techniques for the upcoming sequel are much more colorful and devastating.

With the demo that doesn’t offer much except anticipation, and the mediocre film, Tekken Hybrid isn’t the most spectacular bundle to come out in gaming history. It will, however, entertain those looking for a well built fighting game with plenty of options to choose from.