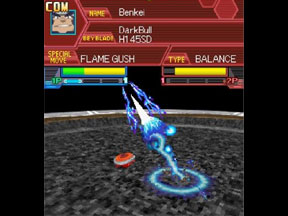 When I first looked at Beyblade: Metal Masters I felt all warm and fuzzy inside. I played Beyblades when they first came out. My step brother and I bought a little arena and we used to spend hours upon hours launching them into the tiny plastic arena and watch them beat the tar out of each other. Things have changed since I started playing, and looking back I’m really starting to feel older than I did before this review.

Now the game of Beyblades is primarily played on game systems. Beyblade: Metal Masters gives you the ability to customize your blades without having to go buy the pieces.

First thing I noticed was that it had better graphics than I expected. More often than naught you see video games based off of children’s toys skate by with the lowest graphics they can get away with and sell. To my surprise this game actually went out of their way to make the graphics better than about all the DS games that I’ve played. Once in the section that allows you to customize your rig, you can enjoy the three dimensional view of your top as you change all the different components.

Well, that about ends anything really outstanding with this game. Most everything I’m about to rant about next could be linked to just about any other game that relies on a brand name to sell.

This game’s story is very, very short. Any shorter it wouldn’t have a story. Which come on, its tops beating the tar out of each other, who cares about story. That’s what I though until I played in my first battle. The battling was unentertaining and very repetitive. After picking up with the game and fumbling through the controls the entire way I was still winning battles with ease. Just for fun I had my fiancee blindfold me and I fought a battle. After about a minute she tapped me on the shoulder and told me I won.

This game has great graphics and fairly decent audio. But it won’t take long for whoever plays this game to become quickly proficient and probably moving on to something else. Kids however, will probably love it.

And if you’re die hard into beyblades then you might get a little bit more from this game than the average adult. While I complement Konami for putting a little extra effort into this title, there are still the trademark flaws of games of this genre. Because Of this I give Beyblades: Metal Masters an average score of 3 out of 5 GiN Gems.