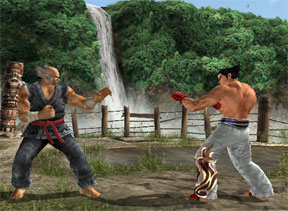 If anyone was like me, they were disappointed with the Tekken series of late. The first PlayStation2 release, Tekken Tag Tournament, offered nothing worthy of interest (and I felt that the tag team feature was slapped into the Tekken 3 engine). Then came Tekken 4, a game that diverted just enough from the past titles that my interested faded rather quickly. While I enjoyed Tekken 3 with a passion, I disliked Tag and was disappointed with 4.

When word of Tekken 5 came out, the demo footage looked promising, but it wasn’t until last Christmas, and a trip to my girlfriend’s home in Hickory, North Carolina, when I would find out just how good Tekken 5 would turn out. Playing it for the first time at a nearby mall, I felt right at home with the controls, as I was able to beat many competitors with my Paul Phoenix special combo (elbow smash, foot sweep, shoulder tackle, and finally the devastating heart punch), much to the delight of onlookers. It was that moment that I realized that even with arcades near death, Tekken was back.

But as always, Namco had to make sure the game was a "better than arcade perfect" port. Needless to say, the tradition continues, but in this case it is better in more ways than possibly expected.

After Jin Kazama’s victory in the King of Iron Fist Tournament 4, he leaves his despised father (Kazuya) and grandfather (Heihachi) behind, as they are suddenly attacked by a garrison of Jack machinery soldiers. At first, it appears that Kazuya and Heihachi are teaming up to fight the Jacks, but Kazuya turns on his father, and leaves Heihachi to suffer a fate by explosion.

Away from the destruction, a mysterious figure reports in with a simple message: "Heihachi Mishima"is dead." However, despite the news, a mysterious sponsor announces the King of Iron Fist Tournament 5.

Anyone familiar with the Tekken series will feel quite at home with the gameplay. A record high twenty characters are available right out of the box, including three new ones: Asuka Kazama, descendent of the late Jun Kazama, the mysterious ninjitsu assassin codenamed "Raven," and Kempo specialist Feng Wei. In addition, as the game progresses, more characters will be unlocked for a total of 32, the most to ever appear in a Tekken title (except possibly Tag).

Most of the characters’ plots can be uncovered in Story Mode, consisting of nine stages that culminate with a fight against the cheapest boss ever: Jinpachi Mishima. In addition to the Story Mode, there are also the standard fighter modes: survival, time attack, versus, and practice mode. However, the best single player mode is "arcade mode."

This is not the typical arcade mode we are used to, as it plays more like the Kumite mode in Virtua Fighter 4, facing an unlimited number of AI opponents in order to raise your character’s ranking. As wins are added, so will gold to be used to customize all the characters with unique items, and even a brand new costume.

There is also a subgame available called "Devil Within." Based loosely on Devil May Cry, it centers entirely on Jin Kazama as he investigates the curse of the "Devil Gene" that is passed through the Mishima bloodline. While it might be an interesting little diversion, the game itself isn’t as compelling as the other modes.

But by far the best aspect of Tekken 5 on the PS2 is the Arcade History section. In it, there are arcade perfect translations of Tekken 1, 2, and 3, as well as an unlockable bonus game, the 1991 rail shooter Starblade. While it is great to play these classics again, I forgot how stiff and limited the controls were on Tekken 1 and 2, but Tekken 3 still plays as great as it did back in 1996 (it was, in fact, the first PlayStation1 game I ever bought). In addition, I completely forgot how butt ugly the first game was, technically and artistically.

But as far as Tekken 5 is concerned, ugliness is nonexistent. In fact, the visual quality is stunning, possibly a first for the series. While Tekken 4 was a little on the drab side, Tekken 5’s visual quality might be confused for an Xbox title, offering widescreen and progressive scan, anti-aliasing, 60 frames per second goodness.

Each of the characters are rendered flawlessly, and their animation is fluid without any visible transition cuts whatsoever. And as far as the facial animation is concerned it has to be seen to be believed, especially for those used to Tekken titles in the past.

The backgrounds are also unbelieveable. One scene is in the middle of a field with the moon lighting up the background, which shines brilliantly off the fighters, making them appear almost ghostlike. Another scene takes place in a burning background, where the heat causes the entire screen to distort ever so gradually.

Musically Tekken 5 goes back to its roots, returning to the techno style soundtrack best known in parts 2 and 3, and for the first time in the series, every character is in full voice. Some of the voices used in the game might end up on the verge of being comical, such as when Paul (who talks like an arrogant brute) is talking to Kuma the bear (who speaks in bear grunts, which are hilariously subtitled into perfect English). The final production quality surpasses even that of Soul Calibur 2’s.

One thing is for sure, Tekken is definitely back. I am half tempted to refer to Tekken 5 as Tekken Anthology, based on all the features and bonuses enclosed with the game. Four Tekken games (in addition to Starblade) for the cost of one PS2 title is a value that no fighting game should pass on, especially if the most recent version is a masterpiece in itself.