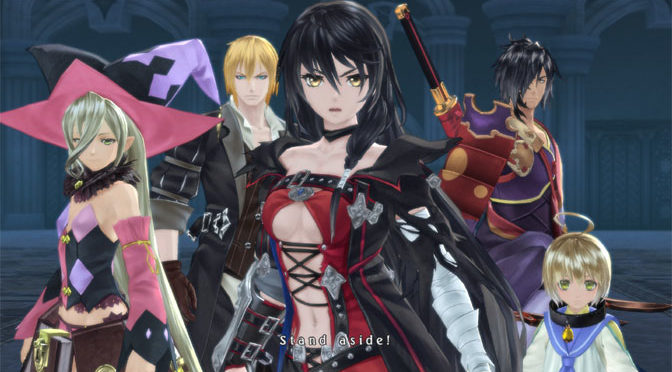 Tales of Berseria is the sixteenth entry in the main series of Tales games, and breaks a lot of the storied traditions of the franchise. Berseria boasts the very first female main protagonist of the series, as well as a plot bordering on darker aspects than Tales of Graces’, “Power of friendship” storytelling vehicle. Berseria is a prequel to 2015’s Tales of Zestiria, which is actually a relative first for the series as this game takes place in the same world as Zestiria but at a significantly early point in time. Berseria boasts a high emotion revenge plot with a protagonist that self-destructively follows a path of perdition rather than righteousness. So, does Berseria soar above other entries in its own series, or does it have sententious flaws like Symphonia: Dawn of the New World, Xillia 2, or even Zestiria? Let’s find out. 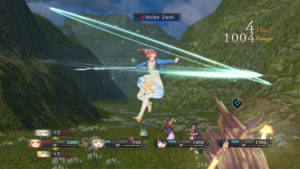 “Why is it you think that birds fly?” This is among the earliest questions posed to protagonist and no-good-at-riddles Velvet by her guardian, Arthur. The opening of Tales of Berseria is a simple one that you have seen time and again in JRPGS: The protagonist lives peacefully in a village that is seemingly sheltered from the horrors beyond the gates of their homestead. The first hours of the game are spent acclimatizing players to combat since the narrative requires Velvet to venture into the woods and collect boar pelts to sell for her sickly brother’s medicine. Soon after, the situation greatly changes as tragedy strikes and Velvet loses quite literally everything- including her own humanity.

Changed into a demon and fueled by an unquenchable thirst for the blood of a man who quite literally ruined her life, Velvet’s vengeance fuels the plot for the beginning of the game. The story is significantly darker than the average Tales game plot, and while there are plenty of antics and humorous banter, this story tends to be quite the breath of fresh air for the series. Considering that most Tales games begin and end with the concept of friendship, Berseria starts off on a much more depressing and sympathetic note and strikes a powerful chord even through the midsection of the game, when most Tales games tend to falter in storytelling.

[amazon asin=B01HQGWBZ2&text=Grab a copy of the darkly amazing Tales of Berseria from Amazon.] 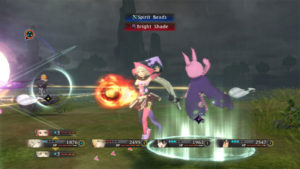 The Tales games are always known for their characters, and Berseria is no different: Velvet is an emotionally broken protagonist whose growth can be measured throughout the story. Compatriot demon and winner of the most likely to commit fratricide award, Rokurou, is the aloof and jocular swordsman. The outrageously unlucky Eizen is brother to Zestiria’s Edna, and is one of the more knowledgeable characters in the cast. The mage Magilou provides a wealth of sarcasm and humor, while the spirit Laphicet and exorcist Eleanor play the role of the “straight men” in the comedy routine, relatively anchoring a cast of characters who have no qualms about murdering a priest in his own home.

The Tales series is pretty renowned for its combat, and thankfully Berseria steps everything up a notch with one of the more refined and complex systems since Graces f. When combat is initiated, this iteration of the Tales combat system allows players to freely move about the battlefield in three dimensions, without the need to hold a button to free run. Players are able to set up a series of 16 attacks, called artes, that can be interchanged in your combos based off of your needs at the time. Some artes may inflict status ailments, be better at stunning, or may just deal more damage to certain enemy types than others, so careful planning of your usable artes is more important than ever. 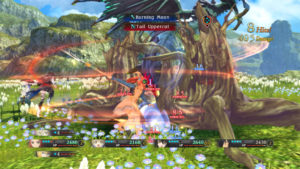 Players familiar with older Tales games may have been familiar with TP or CC systems for resource management during combat, but Berseria uses something different here as well: Players have a Soul Gauge they need to manage while performing combos in this game. Each arte takes a specific amount of SG, and if you run out of SG, your attack speed is slowed and your attacks may be deflected entirely, which will leave you reeling for long enough for an enemy to get its revenge. Players gain souls, which lengthens the Soul Gauge and thus provides more SG to utilize, by defeating enemies, inflicting status ailments, or stunning foes, on top of other mechanics that are slowly learned throughout the game. Unfortunately, your enemies are also bound to this, as well, and can easily steal several segments of your Soul Gauge due to a mistimed block, which will leave you unable to do more than one or two attacks at a time.

On top of that, there’s also unique Break Souls that each character learns- highly powerful techniques that allow you to continue your onslaught but cost an entire segment from your Soul Gauge. These techniques can be as simple as counterattacks that also reset your combo, to complete transformations that make your character immune to stagger and inflict guard breaks like crazy. To add on to this, using a character’s Break Soul quickly boosts the Blast Gauge, which allows players to swap in reserve party members not currently in combat, or spent to use powerful Mystic Artes that can turn the tides of battle on their own. 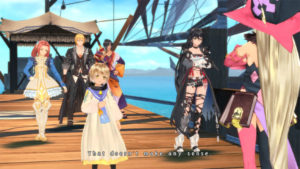 So, there’s SG that needs to be managed, but whole segments of which can be expended to utilize Break Souls, which in turn charge the Blast Gauge which can be used for Switch Blasts (which refill souls!) and Mystic Artes. That probably sounds like a lot of intertwined mechanics in the combat system, which it is, and new mechanics are sprinkled all throughout the course of the game on top of this at regular intervals too. The combat of Berseria is some of the finest the Tales series has had in a long time- feeling rewarding, cohesive, and rife with strategy.

The story is solid, the gameplay is fantastic, so what else is there to do? Well, minigames are available practically everywhere after being oddly absent from Tales of Zestiria. There’s a very simple Diner Dash game that awards costumes for each character, a card matching game, fishing, action challenges with each character, arenas, and more. There’s a wide variety of costumes and attachments that you can collect, with some costumes even changing the battle music. Cooking returns and provides even more bonuses than before, and players can even send out a pirate ship to explore and bring back new recipes, ingredients, or other interesting items. 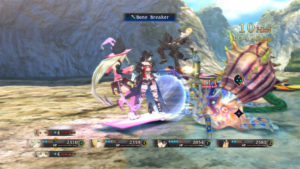 If there’s any particular fault with Tales of Berseria, it would lie with the rudimentary dungeon design. Most of the dungeons and trails are overly simplistic- requiring you just run from one end to the other, grabbing any treasures or fighting any enemies you see. There are some dungeons with more elaborate puzzles, but only one of them was really all that interesting and it was an underwater temple that you would encounter roughly halfway through the game…. though it still had an epitaph that straight up gives the player the puzzle solution. Maybe the developers are trying to keep these elements light in fear of creating another Temple of Shadow (Symphonia), or something, but it is unfortunate that so many of the environments are simply barren of objects to interact with that aren’t enemies or items.

The graphics of Berseria are quite good, at least as far as the character models are concerned. The textures for the environments oftentimes lack the polish that a game would produce on the PS4 or PC. Still, while the visuals are slightly dated (which makes sense, since this was a PS3 title in Japan after all), the combat animations and effects look superb and this is easily the best-looking 3D Tales yet. The audio direction is phenomenal as well, with even the English voice cast generally doing a superb job. Of course, some of the miscellaneous NPCs voice acting can be pretty grating, which would be difficult on your auditory nerves if you spoke to any of them more than once or twice. The music is traditional Tales fare- if you liked the music in prior games like Symphonia or Vesperia, you’ll enjoy the soundtrack in Berseria as well. The opposite holds true, most likely, as well. 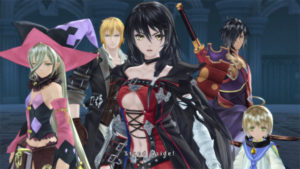 Overall, Tales of Berseria is an extremely strong entry in a very storied franchise. It’s a tale of characters that normally would never have the spotlight in this kind of series and their fight on the wrong side of history, which makes the plot exceedingly fascinating. The combat is fine-tuned and robust, with difficulty options that allow hardcore Tales fans to ramp up the difficulty, or allow a more inexperienced action RPG player to still enjoy the whole of the game. Berseria is certainly not a game that should be missed by Tales fans or RPG fans in general.