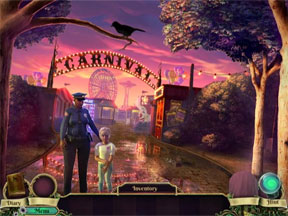 A mother and child are enjoying a brief and enjoyable day together at a local carnival when tragedy strikes: The mother becomes separated from her daughter and disappears in an enigmatic and potentially outlandish manner. You play the role of a detective, brought in on the case to pick up clues, buttons and fortune teller cards, all for the sake of finding the now-estranged parent.

The game opens by offering a tutorial which could be handy if you’re unfamiliar with these kinds of point-and-click adventures, and the tutorial is even so kind as to guide you to and through the first couple of puzzles should you choose to accept it. If you’ve played games like Myst or Monkey Island, then you could most likely safely bypass the tutorial with little trouble, but it could potentially be helpful for those who may not have experienced this genre at an earlier point. The clean, brightly colored graphics should make the game easily accessible for even those with little experience in the genre.

One thing prior adventure game players might notice is that some of the puzzles don’t make sense in regard to rewarding you with the object you need to progress further in the game. For example, early on you encounter a claw machine game, but apparently the police department from which the protagonist hails cut salaries recently since you have no quarter to operate the machine. To rectify this, you retreat a screen and visit the ticket booth for a hidden object puzzle or matching card game. After finding miscellaneous objects such as a toy lion and lollipop, you’re rewarded with a button for seemingly no reason and you can take the button to the fortune teller machine which provides you with a quarter.

The hidden object puzzles and card matching games are a common recurrence in this game, being about 22 of each of them in all. An interesting thing to note is that many of the interactive scenes are already pretty easy to complete, and even if you get stuck you can avoid using the skip feature entirely and play a card matching game called Monaco. In this card game, you match panels that have the same symbol and are adjacent (horizontal, vertical and diagonal), and matching panels with colored radial backgrounds crosses an item off the list of things to find in the hidden object scene, so you can complete either to progress through the game in case you get tired of the hidden object scenes or get stuck.

This isn’t to say the game isn’t enjoyable to play. It is a little disappointing that the hidden object/card matching games outnumber the other puzzles pretty significantly, but the other puzzles included as you progress seem all the more unique because of it.

Many of the items you collect form various puzzles throughout the game are brought together to open your way to the next puzzle, many of which are pretty unique. The puzzles can range from arranging letters to spell out a specific word then use the provided cipher to re-spell the word using various symbols to solve a cryptogram, to matching pictures on colored tiles. The puzzles are usually quite easy, pretty much like the rest of the game.

The story presented is cheesy but still interesting, quickly progressing from a normal missing person case to searching through an alternate mirror dimension. The environments change from the typical carnival fare with Ferris wheels and various attractions to a more caustic atmosphere; changing the game’s color palette from bright, pastel lights against shadows to a green, foggy environment complete with floating debris, apparitions and hanged corpses make for a real, ‘Amusement Park of the Damned’ outlook.

One minor gripe is that toward the end of the game you’ll be repeating a lot of hidden object scenes, not to mention there’s significant backtracking toward the tail end of the game. Upon nearing the conclusion, there’s actually more wandering back and forth across the respective amusement parks than there is actual puzzle solving, which is a little troubling since a fast travel feature could have bypassed all of that. All in all, it only takes about four to five hours to complete Dark Arcana: The Carnival, but there is some replay value with the in-game achievements offered.

To summarize: Dark Arcana: The Carnival offers a very interesting plot revolving around two worlds and a missing person, complete with clear and easy to complete hidden object scenes. The two worlds look great and have multiple puzzles that are accessible to first-time players of the genre while still being entertaining for more experienced point and click players. The lack of a fast travel option for the last quarter or so of the game does become somewhat annoying, but it’s not a deal breaker.

In the end, Dark Arcana: The Carnival earns 4 GiN Gems, making it more than worth the price of admission.