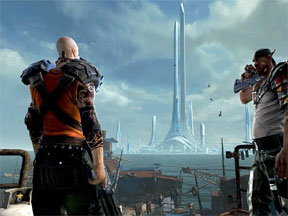 The PlayStation Network outage was frustrating, and having a game where you really needed to play in multiplayer mode just intensified that feeling. Thankfully, the service was restored and all was well once again. But that’s why our Brink review is a little late. We decided to take a look at it on the PS3.

Brink is one such game that I highly recommend playing in multiplayer mode instead of solo. You are a part of a team and AI’s as teammates is never a smart move. Most human players will outsmart the AI any day. Notice I did say most!

Brink opens by informing you of a city called "The Ark," a man made city floating in the ocean. It is a "green" city with renewable resources built in 2005 and considered at the time to be the 8th Wonder of the World. This is loosely based on real life technology that is in development. There are 10 concept cities trying to do just that in real life and probably more that are not getting the press coverage. Basically, these cities in real life and in the game are designed to deal with the global over population problem.

The Ark in Brink was built around 2005 and it was working. The problem was it was built too late. Greenland’s Ice Shelf has melted and as the story goes, overnight the sea levels rose worldwide. The Ark was designed to sustain 5,000 people, but the founders decided to open its doors and let anyone in. Now the population is at 50,000 and the game begins about 30 years after the population spike. Needless to say, the resources of The Ark are exhausted and it’s not so nice a place to live anymore.

The Ark has lost contact with the outside world and no one is informed about what is happening, or if anyone else is out there. This is very similar to a project I recently received in class. lol

The Ark is 1,000% overpopulated so things are breaking down, supplies are running out and there is no way to replenish needed materials. Those situations are the brewing for civil unrest and untimely war, instead of peaceful unity.

The two sides in the conflict are the security forces and the resistance rebels. You are asked to pick a side. Do you want to protect The Ark or Escape The Ark? Those are your choices, right from the start.

Now you will be able to create your character, only to notice that your options are very limited compared to what we previously experienced in other Bethesda titles. I was not able to create a character that resembled someone famous, or myself, and there are no female choices at all, which is really a stupid oversight.

The classes to choose from are: Engineer- repairs some objects, disarms bombs and lay down turrets and mines.

Medic- healer for yourself and other friendlies.

Operative- stealthy class can disguise themselves as dead enemies while idle, hack computers and the more operatives working on a hack equals faster hack.

In a lot of ways, the classes are similar to many other multiplayer shooters out there like Enemy Territory: Quake Wars or Team Fortress.

Brink brings a new development to the genre with a "Parkour" free-running S.M.A.R.T. technology (Smooth Movement Across Random Terrain). Other games require a multiple button/trigger combination to pull off this feature but here we have a single button that allows the character to scale walls and maneuver over or under obstacles. The smaller frame your character is will determine some different abilities than say one with a larger frame. The result will be the ability to go into some new areas in the level if you are smaller. Again, the addition of a female character would be nice.

There are 50 different skills to unlock but only about 20 are assigned to each particular class. Do not worry about decisions being final because skill points can be reassigned at anytime in the game. Points are awarded for completing objectives, killing enemies and teamwork. Therefore it’s another reason to play in multiplayer mode, but beware the lag. This is one of many errors that the new DLC is supposed to correct.

The campaign does explain each side of the story briefly and missions do not have to be played in order. You can also jump sides while outside of a mission, even though I never performed the switch.

There are eight maps with different goals on each that are based on which side you are on. This brings me to my next point. I found the storylines lack luster and therefore boring. They just did not hold my interest and the missions were very repetitive. The missions where basically go hack a device, operate machinery, escort this VIP and place explosives at said location, then repeat that all again on this map. Yawn! The time clock on certain missions made me feel the same as when I’m clock watching for a boring class to end. Time would slow to a crawl.

Graphics are good, but I noticed a few glitches. While playing some levels, I would notice pixilated lines appear sporadically, a blurry haze, or a texture would fail to load. I am hoping this is not a problem with my PS3 but I have not noticed any problems with my other games.

There is a DLC pack now that arrived to Xbox Live, PSN and Steam on August 3. The pack, called "Agents of Change," is free for a couple weeks. It will include updates to correct some of the noted problems and will add two new maps and five new abilities. This free DLC may add to the replay value and I do love the word "free."