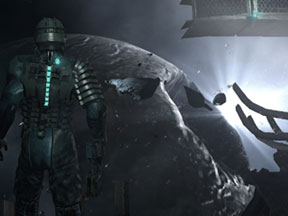 After the let down that was Silent Hill: Homecoming, I was on the lookout for a game to fill both the depressing void in my soul and the number of days I had set aside to devote to a total horror survival experience. At first, I thought my options were limited to the PS3 release of Bioshock (more on that at a later date, I suspect), but when I started hearing about Dead Space, the suspicion that my title had been found started to emerge.

In Dead Space, you are Isaac Clarke, an engineer sent along with a repair squad to fix up the Ishimura, a busted Planet Cracker spaceship posted in the far reaches of space. Isaac’s girl Nicole is stationed on the Ishimura, so as far as he’s concerned, the job will be part work and part loving reunion, which would be a wonderful start for a futuristic romantic comedy.

Unfortunately, the box to Dead Space has a severed limb floating on the backdrop of a wrecked spaceship and a vast, starry abyss, so happy reunion was the last thing the EA Redwood Shores team had on their minds.

After a brief opening, you meet your first adversaries, which immediately takes out two nameless members of your five-person team. The monsters of Dead Space are Necromorphs, which translates to an alien organism that takes dead tissue and restructures it to create creatures with abilities solely devoted to harming others.

To add more of a challenge to the standard run and gun action found in other third-person games, blind shooting is every ineffective when faced with these enemies. Instead, you have to use your plasma powered weaponry to dismember these Necromorphs. Only then will they stop trying to rip you apart.

The different versions of enemy challenges can be broken down into four major characteristics: arachnids, pregnants, bombers, and spiderbabies. In addition to these, several more dangerous foes show up as you venture deeper into the tight corridors of the Ishimura, but none are more present than these four archetypes.

As far as story goes, Dead Space is pretty dull. The game objectives take Isaac from location to location, often having him revisit previous stations and performing tasks at the behest of his two surviving teammates. Isaac is quickly made into an errand boy, with little to motivate him outside the bleak prospect of finding Nicole.

However, the story is hardly the point of this title. Instead, we have a solid gaming experience that adds innovative features to your kill strategies, a dark and looming atmosphere for players to gun through, and tons of defensive weaponry options and backlog material spread throughout the 12 chapters of the game.

Another impressive feature with this game is the new take on Isaac’s heads-up display, which relays game and story information in real-time through the use of a holographic menu. This system displays videos, audio, maps, personal logs, and interactive communications between characters without allowing for a pause in gameplay. Even Isaac’s health bar has been cleverly integrated with his RIG, stretching down the spine of his armor.

And while the plot may be sparse in Dead Space, the details within that plot are very intricate. The ship feels like a ship that could travel through space and "crack" a planet. The individual logs and haunting windows of video and audio left behind by the terrorized Ishimura crew fully invest players to the game.

Tons of thought went into creating the universe that the characters of Dead Space inhabit, and that time and effort comes through crystal clear while playing. Even the minigames like zero-gravity basketball and the shooting range have been incorporated to the overall feel of the game. Yes, these activities would be made available to a crew to help them unwind or increase their skills, so it doesn’t take you out of the game in the least when they appear.

The tiny efforts make up the whole, showing how the developers took this particular project with just the right amounts of seriousness and humor. And while it has its faults, Dead Space has far too many advantages that overshadow those blemishes for there to be any doubt that this game is completely solid.

On my end, to be honest, I haven’t invested so much in time playing a game since I got my hands on The Orange Box. For me, the replay value of Dead Space was very high, fueled even more by the individual tasks of the trophy/achievement system.

Basically, if you have a chance to check this title out, take it, and be content in the claustrophobic fear it induces.