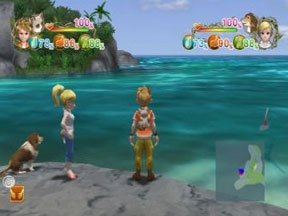 Besides the occasional phone game, I am generally not much of a portable game player, but apparently from my research, Lost in Blue is a long running series on the Nintendo DS with three earlier versions. So it is pretty cool that it has made the leap to the Wii. While I was writing another review my wife cracked open the case for the first time and after asking me where the nunchuck was, she was off and running. I will come to her thoughts on the game a bit later on.

Lost in Blue: Shipwrecked, like the other games in the series, is basically a survival game. You play as sixteen-year-old Aidan Sanders. He is joined by his pet monkey Hobo and you probably guessed it, there is a shipwreck. Aidan finds himself stranded on a small island.

As you explore you find an empty water bottle which you can fill with water, food, and other items laying around the island such as sticks and vines. Aidan also gets hungry really quickly and you will learn to shake trees using the Wii remote to get coconuts for him to eat or pick berries. It’s not too hard to find food, but Aidan sure does want to eat a lot.

Water was a bit more of a challenge; fortunately Aidan didn’t seem to get thirsty very quickly and with the bottle you can carry some around with you. The last thing that Aidan needs to do is to rest to regain his stamina.

Basically as you move around exploring the island you will encounter a bunch or mini games which yield different items. For example, pulling down vines gets you things or events like starting a fire, well, gets you fire.

Eventually you spot another island off in the distance and you finish exploring the first island and discover that no one else is around. So it’s not just a game about you and your monkey, you decide to craft a raft. Of course you do more mini games when constructing the raft.

On the next island you meet another shipwreck survivor named Lucy and her faithful collie Max. Because you lost all the stuff you collected during your journey, the fun of collecting food, water and other supplies starts all over again.

You have the choice of bringing Lucy with you as you explore. The advantage there is the extra storage space of her bag. The negative is that she is the worst stereotypical girl ever created. She needs help doing everything and significantly slows you down.

There really is no deep plot or in-depth story behind this game; the focus is on survival. And to that effect they do a nice job, but they have focused on the physical needs for food, water, and rest too extensively. Even factoring in the accelerated time, if I ate what these people need to consume each day I would weight 350 pounds within a month even taking in all the exercise. I know that rest, food and water are important to survival, but with a game like this, you need to balance survival with things that are fun like exploring.

For me the only thing this game has going for it is all the fun mini games like starting a fire, pulling vines, cutting wood, grilling meat, chopping food, or padding a raft to name a few — all using the nunchuck and Wii remote. That said, doing the same games over and over again gets really annoying. My wife is of the opinion that the game is just a poor excuse to string together a bunch of mini games.

The graphics look like they are a port from the DS or maybe from a game that is from 10 years ago. I know they could have done better there. On top of that I am not sure why they included any speaking. What the characters are saying is printed on the bottom of the screen, but you only hear maybe one word in 10 of the conversation.

I really like this game in concept. The heavy use of the Wii controllers is great and I was happy to see it. I know this is supposed to be a survival game and with real survival there is a huge focus on tediousness. I really think the balance between that and fun was way off. This is supposed to be a fun game and after playing for a while the grind can become mind numbing.

One thought on “Survival Game Gets A Little Lost”