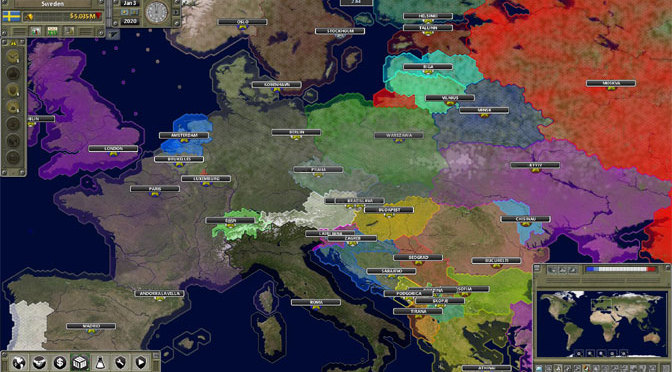 My list of reviewed war games is getting a bit extensive. The majority of them are World War II strategy titles. In fact, one was this games predecessor, Supreme Ruler 1936. The Supreme Ruler 1936 game was an amazing title that earned 4.5 GiN Gems. It will most certainly get a Game of the Year nomination for strategy titles. Now Supreme Ruler Ultimate takes that a step further, into the modern world. In fact, Supreme Ruler Ultimate incorporates content from the entire Supreme Ruler series, hence the name. It lets players take control of any nation and lead them starting in the World War II era, through modern day and on into the future. The future scenarios present a realistic world view shaped by actual events, but without any preconceived notions or restrictions for the player.

One of my favorite things to do with this series is sandbox play. The BattleGoat games always allow me to play any nation I want, and for me that often means fighting in and around my native Serbia. To my never ending joy there were three sandbox campaigns set in the year 2020 with Supreme Ruler Ultimate. In fact, within Europe I was able to choose every single country in the Balkans, including the newly broken off country of Kosovo which I was very surprised to find.

The situations outlined by Battlegoat for each country are very realistic and most of the roots of the problems you experience are the ones going on today. In the end I chose Croatia as my country for this review, and proceeded to get ready for inevitable civil war with Serbia.

I started flipping through all of my technology options and my jaw hit the floor. Here it is, 2020 in game years, and most of my technology was up to date…if it was 1994. Guess Croatia didn’t keep their gear completely modernized, which again, is fairly realistic. So I immediately began upgrading my missile defense systems and overall country defense. While I was doing that I noticed an exciting feature, the fact that you can now work on civil issues. You can elect to have policies like legalizing gay marriage which is an interesting addition to this type of game. The policies have a subtle influence on the game too, which manifests itself in surprising ways without being overbearing.

Eventually ethnic war broke out in the Balkans (as it always does) and for once I was NOT involved. Slovenia and I sat back and watched as Serbia, Bosnia and Macedonia started beating each other up. Eventually it was easy pickings for me as I slowly made my way down towards Greece, taking over everything I could.

Sadly my little Slavic empire came crashing down as my ego grew bigger than my country. So I elected to wage war against Germany…not my brightest tactical move. I got demolished and what little Germany did not claim as punishment for my stupid attack, my opportunistic friend Slovenia was right there to grab. Guess that old saying about keeping your friends close really meant something here.

On to the base parts of the game, and I am not going to lie to you, Supreme Ruler Ultimate is complex, perhaps even more so than the previous titles. There is a lot going on and your undivided attention must be on what’s happening in front of you. That said, BattleGoat implemented a fantastic tutorial to walk you through the process. As before, this is a game with an incredibly high learning curve, but the rewards for mastering it is the ultimate freedom to run any country in the world any way you choose.

The music was really done in Ultimate and even varied slightly depending what major power you used. No matter if you chose China or the United States, the musical score will be solid and appropriate.

What really made the final selling point for me was the graphics. Unlike games such as Hearts of Iron where you just get a dot to represent a city, here you can get up close and personal. I could zoom in almost next to my capital city of Zagreb and would do it on numerous occasions. I was also looking for inaccuracy within the cities in the country. Guess what? I didn’t find any. I was impressed with how much research BattleGoat must have put into the game in order to get everything right. That level of detail is going to be something that players are really going to appreciate.

Supreme Ruler Ultimate should be the ultimate go-to wargame on your list for 2014. BattleGoat officially beats Paradox Interactive and takes the crown for top wargame developer. Overall, it’s nice to see this genre and type of game continue to grow. With great developers like BattleGoat working on war games with such a high level of, highly accurate, details it’s a safe bet that armchair generals will have lots of fertile ground to conquer for many years to come.

Supreme Ruler Ultimate easily earns 4.5 GiN Gems for being one of the best wargame simulations to come out this year.