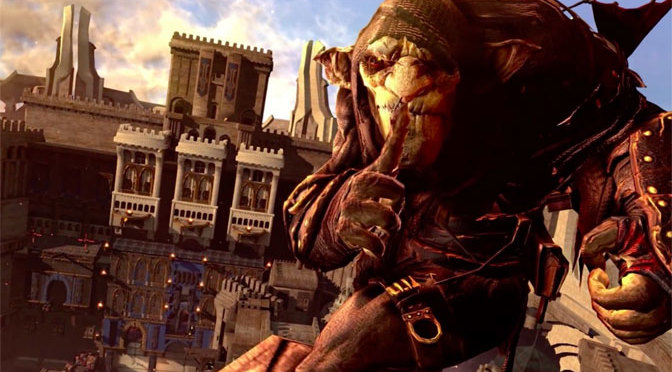 If you ever stopped to think about how much Tenchu or Thief could have been improved by replacing the protagonist with a goblin, then Styx: Master of Shadows is the game for you. As the amnesiac goblin named Styx, who awakens during an interrogation with no memories other than he wants to steal the heart of the World Tree and…that’s about it. He’s a goblin who likes to sneak around and steal stuff, which is about all the motivation you need, though the fantasy setting is actually somewhat refreshing considering it’s a bit of a twist on the standard fantasy formula.

Styx is all about the stealth; putting out torches, sticking to shadows and avoiding combat at all costs is the name of the game. Combat is extremely difficult in the beginning on Normal mode, and it only gets worse on higher difficulties. On Goblin mode (the highest difficulty level), no amount of player skill can compensate for how quickly guards kill you during combat. Later in the game, after players have had a chance to select some skills that make parrying easier, alerting the guards may not be a no-win situation, but aside from that it’s generally better to avoid everything that can kill you, unlike a great number of other stealth-style games, and save often. Of course, there’s also the option of running like a scared little girl and avoiding combat altogether (an option I strongly recommend if spotted).

Styx: Master of Shadows does not auto-save very often, which can be frustrating after evading an entire room of baddies, climbing further into an area only to be spotted by a random patrolman, all of this happening an hour since the last automatic save. Thankfully, you can save wherever you want through the pause menu, which is highly recommended after clearing a guard-covered approach and reaching the next area, it’s just odd that the game saves automatically so infrequently.

This game is all about the timing: Stealthily moving from one location to another, extinguishing torches, taking out guards, if necessary, or creating distractions to avoid being discovered. Clinging to ledges or sticking to higher ground can prevent guards from seeing you, and players of Styx: Master of Shadows will be explicitly conditioned to constantly keep a watch on the shadows around you and to avoid large groups of guards. Guard movement patterns are present and learning them is key to enjoying this game – in fact, utilizing those skills built up early on (stealth, sticking to the darkness, etc.) will compound with skills achieved throughout the play of the game such as being able to use the Shadow Clone Jutsu to make copies of yourself to distract guards or even pulling a Hollowman and turning invisible for extremely brief moments.

Of course, the platforming in and around the stealth sections leaves a little bit to be desired if you’re not careful. Master of Shadows isn’t like Assassin’s Creed in guiding you around every little banister or beam you can traipse across, and players would don’t pay attention can fall off of thin railings very easily. Pushing toward the edges of platforms will cause Styx to hang to the edge of it, but those that are used to moving and clinging to literally every object around like Assassin’s Creed III or IV will either be pleasantly surprised or disgruntled by the fact that this does not happen in Master of Shadows at all. It’s 3D platforming in its simplest form, though it can be infuriating to try and hang down from the ledge you’re currently on to avoid some guards, nudging toward the edge of the platform and seamlessly confounding the game on whether you want to drop down, or fall down and right in front of a completely separate batch of guards you were trying to avoid, as well.

The environments in which Styx will venture range from beautifully designed towers, intricately designed airships and spelunking across the landscape dotted by gargantuan buildings. Some areas heavily restrict your movement by introducing large numbers of humans that will spot your…well, goblin-esque self, so sneaking around using crates and darkness will be of paramount importance.

The graphical display of Styx: Master of Shadows is top notch, among the best seen in a middle budget kind of game. The shadows are used to great effect, and it’s pretty simple to keep in mind when you’re visible and when you’re not. The textures may leave a little bit to be desired, but the presentation definitely doesn’t rest on its laurels.

Even better so, the music is extremely well-integrated into the game. While the variation of the score leaves much to be desired, the mellow tones while undetected are easy enough to listen to, but the moment a guard is suspicious or the player is spotted, the tempo of the soundtrack increases to great effect. The soundtrack definitely helps keep the player apprised of the severity of the situation. The voice acting is quite sufficient, with the recording quality being solid and the actors themselves doing quite the decent job of voicing a variety cast consisting of elves, a goblin and humans. A lot of the acting falls into the typical British or Scottish accents, much fitting this sort of fantasy theme.

As far as the missions themselves go, they’re all split into several parts with lots of areas to explore that are off the beaten path. Styx doesn’t have to go directly to his objective, you can actually have him run around and find any collectibles or items that you would not have found otherwise. Sometimes wandering around and exploring will do little more than get you caught by guards, which when noticed will present you with the options of fighting in combat or trying to escape. As far as combat goes, players are locked into a series of quick-time-events, consisting of you blocking your opponent’s strikes by correctly timing the prompts and then you’re given the option to kill your foe. Combat is quite boisterous of an activity, however, and guards in combat tend to attract even more guards…running away and returning to the full-on stealth approach is much more effective than trying to take all of the guards on, one by one.

Overall, Styx: Master of Shadows is excellent for a pure stealth game. Aesthetically pleasing, audibly engaging and constantly forcing the player to be wary of his or her surroundings in order to proceed. The game lacks some polish in certain aspects, such as moving from standing on a platform to trying to grab the ledge of that platform, which can make the game needlessly frustrating. On top of this, the game kind of fails in eleventh hour by forcing you to re-tread areas from previously completed missions, which is kind of a shame. Those who have been wishing for a pure stealth game, or were perhaps disappointed with the latest iteration of Thief, would perhaps find something to enjoy in Styx: Master of Shadows. Those who prefer to sprinkle a little choppy-stabby into their stealth and have the game reward them for it would probably need to play Dishonored, instead, as Styx wants you to be a sneaky snake, not a Stabby Susan.