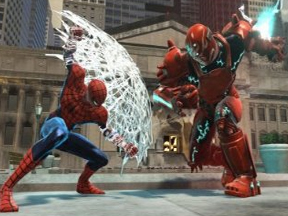 Spider-Man: Web of Shadows features an original story separate from the comics. Venom has come to take over New York City, and he’s brought an entire army of symbiotes with him. Of course, it’s up to your friendly neighborhood Spider-Man to save the day. Spidey’s not alone, though. Some of New York’s most famous super heroes join him on his quest to retake the city.

Players are able to take different missions from the various heroes of New York. In addition, once they’ve been unlocked, heroes can be called in for assistance when needed, provided that a special meter is filled. For the most part, though, the game consists of Spidey taking on the bad guys by himself.

Because you are alone most of the time, there are several crucial decisions about fighting style that you have to make early on. The first, and most important of the game, is whether you choose to be good (red suit) or take on a darker persona (black suit). It’s more than a matter of good and evil, though. Choosing the good route will leave open more options for a fast-paced web attacks. Choosing to go with the black symbiote suit will give the option of going with a more strength-oriented, hand-to-hand combat style. Players won’t need to choose just one or the other, though. If you prefer, there is the option to level up both fighting styles instead of just focusing on have one strong one.

When leveling up, players are given the option to strengthen skills in several areas. One of the areas will improve Spider-Man’s web-shooting ability. In that category, there is another sub list, where you’re able to select how you want to level up the power. If you think having more damage would be more beneficial, then level that skill up. But, if you think it would be of greater use to be able to shoot web faster, then that skill is an option. The same style skill map is available for all of Spider-Man’s abilities, both in the red suit and the black suit.

But what the game has in the depth of its leveling system, it loses in the combat mechanics. Despite the fact that the game boasts a large number of skills to choose from, when it comes down to it, Spider-Man: Web of Shadows is a button-masher. The only thing separating it from other button-mashers is that players are given the option to pound buttons while zipping around New York City’s skyline. Making this issue worse is the clunky control scheme. Players will spend as much time fighting with the controls as they will fighting enemies.

Through all the mindless button mashing and web swinging, the game has one problem that is unavoidable: graphics. The game just doesn’t look good. It doesn’t look terrible; it just looks bland and boring. Almost all of the enemies look the same.

Buildings aren’t rendered in any kind of detail. New York City just doesn’t come to life, and it detracts from the game’s attempt at bringing the Spider-Man universe to life. It doesn’t seem like the game takes place in a world that’s alive or has any kind of personality. Everything from cars on the street to enemy locations seems scripted so rigidly that there is no room for freedom or improvisation. The graphics are made worse by an absolutely horrible camera. If players aren’t fighting the control scheme, then they’ll most likely be trying to get the camera, which seems to have a mind of its own, facing the right direction.

The graphics aren’t helped at all by the sound. The voice acting is cheesy at best, and the lines are as corny as a field in Iowa during harvest time. The sound effects are what you’d expect, with the standard smashing and crashing of a beat-’em-up game.

In all, Spider-Man: Web of Shadows was a good idea on paper that was poorly executed. Cumbersome controls and poor graphics make this game one that even the most avid fans of the wall-crawler may want to rent first.

It gets 2.5 GiN Gems out of 5 for failing to live up to its namesake.