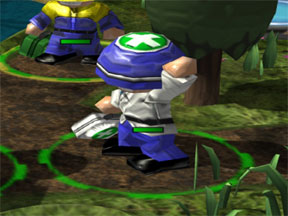 My two most reviewed games genres at GiN have been puzzle and strategy games. Heck I’ve lobbied my chief editor to give me a title as ‘Official strategy and puzzle reviewer.’ It hasn’t happened yet. So as your favorite non-titled reviewer of this genre let me tell you about an amazing game.

From the first moment Great Big War Game started, I knew this game would be different. Sure enough there was a female soldier standing there and the general walked out in nothing but his underwear. My first thought was that I was hallucinating, but sure enough my eyes weren’t playing tricks on me. Near the end of the conversation the general says, pick a country that’s not us and throw troops at them. I giggled at this because I could see some war meeting going like that.

So then came the introduction mission where the basic controls and premise are explained. The controls are simple and the mechanics are just as easy to pick up. Within seconds I was gunning my way through the hostile terrain. Of course I took a slower, more cautious approach than the general wanted.

While the cartoon like graphics make you think there is nothing serious about this game, there is. One mission I had three units trying to hold off an army of tanks. Lucky for me I knew my way around explosives and won the battle.

This game has the perfect level of difficulty. It’s not easy, but not frustratingly impossible either. Great Big War Game kept me glued to the screen and required no caffeine to keep me going.

Of course I was kept awake all night by the addiction this game caused me. In fact I think Folgers should send me a thank you letter. My friend actually called my first night playing this game ‘grind night.’ I drank two pots of coffee during the course of my first night.

A lot of the time I was picking off people with my sniper units. Of course I had to diversify when they started having lots and lots of tanks. Once they gave me artillery I was a happy camper. My style of combat is long range. I don’t like getting up close and personal.

The music and voice acting in Great Big War Game is nothing short of great. Every time you click on a new recruit there is a humorous line or two. The only drawback I could find was the in game vocals. Each soldier only knows a few things, so the talking gets pretty redundant. Eventually I just jammed to heavy music instead.

Great Big War Game earns four and a half great big GiN Gems. No matter what platform you play it on, be it the mobile side of the house or on the PC through a download service like Steam, you are in for a comical, strategically laden wild ride.