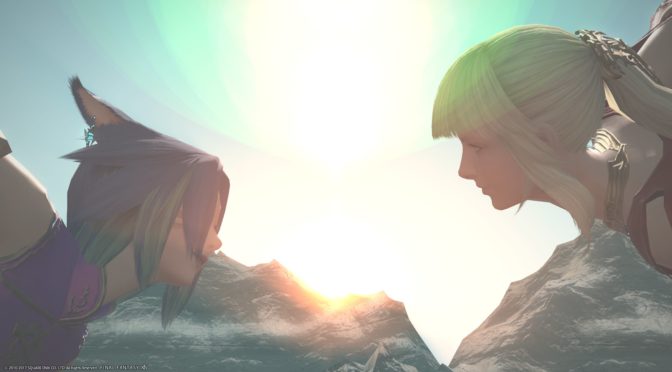 Hey all! I’m back with my review of Final Fantasy XIV’s latest expansion. It’s my Stormblood Review!

Plot Synopsis: Having forced back the forces of the Garlean Empire out of most of Eorzea with the exception of Ala Mhigo, and then ending the thousand year old Dragonsong War between Ishgard and the dragons of Dravania, the Warrior of Light is now poised for war once again, having dealt with the insane Griffin who summoned a Primal during an attack on Baelsar’s Wall, having to unleash an ancient Allag weapon to deal with said Primal, they must once more turn their eyes to Ala Mhigo and the looming fight for it’s liberation.

Plot: The plot of Stormblood is even better than Heavensward, and that’s including the 3.X Patch content that was released after the Heavensward expansion launched. It really gets to the nitty gritty reality of fighting for freedom from tyranny and the prices that must be paid to earn said freedom.

There are multiple zones that the Warrior of Light (read: you the player) must progress through until you reach the final epic battle at the end of the 4.0 storyline. The entire time I was repeatedly impressed with the story telling of the zones and the plot in general. My favorite zones are probably The Ruby Sea and the Azim Steppes. The Ruby Sea felt like a woman’s version of the FFXV road trip. That is highly due to the fact my character is female, but it was some of the most enlightening moments of the story about two of the more prominent characters who haven’t gotten a lot of screen time yet. I won’t name them, because spoilers, but I was impressed greatly. Which isn’t easy to do for me. 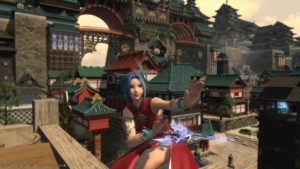 As for the Azim Steppes, it’s probably my favorite area/zone in any game thus far. It’s full of life, from the silent traders who believe words are all lies and thus never speak, which made for really interesting questing, to the meek tribe who follow the commands of their gods in everything from what to wear each day to who to marry. The entire is zone is not only beautiful, more on that later, but it felt just alive. Most MMOs don’t feel alive without massive amounts of players, but the areas in Stormblood all felt alive, each teeming with various NPCs that just go about their daily lives and business. 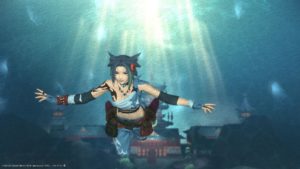 Gameplay: The gameplay of Stormblood is both the same and not. Many classes had abilities and spells removed, most from the cross-class system that no longer exists, and while my main job of Ninja didn’t get dealt as hard a blow as other jobs like Summoner or Scholar, it still felt refreshing. There are times I want to use a certain combo that doesn’t exist anymore, but for the most part it was easy to adjust for me. Others may not find that to be true. As for the new Jobs of Samurai and Red Mage both are amazingly fun to play as, and I’ve played as both quite a bit. I’ve leveled up my Samurai to level 54 and my Red Mage is level 60 as of this writing. Each both have their distinctive styles of play, but they’re both quite a bit of fun. I find myself really enjoying Red Mage, and that’s coming after I was skeptical about the class after it was announced last year. I didn’t know how they’d fit the Red Mage image and theme from past games into XIV, but they did it very well.

[amazon asin=B071CMXD5H&text=Start your own adventure right now with a copy of Final Fantasy XIV from Amazon!]

As for the various dungeons and boss fights I’ve experienced all but Emanation Extreme as of writing this and they are all quite fun. Now you may have heard about the various issues players were experiencing the first few days of the Early Access period, but those have all been resolved and were mostly caused by a third party DDoSing the Square Enix servers.

One last thing of note is that Stormblood does what almost no other has ever done before, and that is to completely and utterly separate the PvP portion of the game from PvE. None of your regular spells or abilities are usable in PvP. Instead you get ‘new’ abilities and while they are named the same and may do similar things as their PvE counterparts they are not at all affected by anything else other than the base PvP abilities. It’s a huge change, but it’s one that I wish other games would do, I’m looking at you World of Warcraft and Destiny. It’s a brilliant piece of game design that has never been done before in such scale , and the game has been made better for the change. Now any PvP action you use can be adjusted by the developers without touching your normal skills that you’d use out in the world. I have actually PvPed, both as my main job of Ninja and as a Samurai, and I love the changes. It’s such a refreshing change of pace from other developers spouting rubbish about how they want their PvP portion to feel like their PvE portion in terms of abilities. While it’s similar, it’s also different and that’s a good thing because PvP and PvE are not the same and having the same mindset for both won’t be beneficial.

Art: The art of Stormblood is excellent, from the zones to the characters facial expressions everything is wonderfully done. With the dropping of PlayStation 3 support Square Enix was able to squeeze in so much more details. The Warrior of Light’s facial expressions in particular felt just so much more alive in this expansion. That isn’t to say they were expressionless in past content, because they weren’t, but it seemed like there was about 50% more expressions from the characters you interact with.

Music: The music of Stormblood is just as fantastic as all the past content, and it truly is some of the best music out there as I’ve come to expect from the Final Fantasy series. The Primal battles in particular were incredibly well done. The second Primal you encounter’s battle theme has been stuck in my head the last few days.

Overall: If you love amazing plots, excellent gameplay, a fantastic cast of characters, terrific musical score and stupendous artwork Final Fantasy XIV will meet and exceed your expectations. I can’t wait to experience the 4.X content because the story was that amazing. I’m not looking forward to waiting for the next major patch.