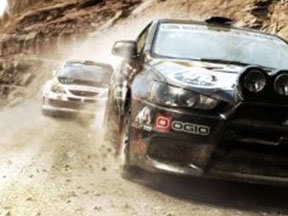 When Colin McRae was killed in a helicopter crash in 2007, his Rally series underwent a major change. Renaming itself DiRT, the series started to drift away from standard road rally racing to a more extreme environment. DiRT 2 takes the setting a step further by basing the racing experience into an X Games mentality.

That’s not saying that classic rally racing will be made extinct. That is still available as an option. However we now have additional modes such as Rallycross, Domination (rallycross racing where drivers fight over the fastest time in each section, most sections win,) Gatecrasher (complete the course before time runs out, but hitting foam gates add a few seconds to the remaining time,) Trailblazer (similar to Rally but you are sharing the track with your opponents at close range,) Landrush (circuit racing,) Raid (point to point rally style with all competitors starting at the same spot) and Last Man Standing (elimination racing.)

In addition to these race modes, rival stars will challenge you to Throwdowns, one on one competitions centered on three modes: 1-on-1, Shootout (finish in the top 3) and Timed (beat the challenger’s hot lap.)

All of the races traverse the globe in nine key areas: Croatia, Malaysia, Utah, LA, London, Morocco, Baja, Japan, and China, and each of the races perfectly fit the setting. For instance, Morocco, Croatia and Malaysia are more appropriate for Rally racing or Trailblazer while LA and London are better suited for Rallycrosses.

As races are won, experience is earned, and by increasing levels you open up new events. The higher rated drivers earn invites to the three X Games events (Asia, Europe, and America) as well as five World Tours. In addition, there is a bonus event done as a fitting tribute to the late Colin McRae (with a very touching memorial video.)

Those who expect DIRT 2 to be a pain to control will be in for a surprise as it is very responsive, almost arcade-like, and accessible to anyone. Still, I feel that there are some out there who are more akin to the original DIRT, and miss some of the events of that game. Myself, for instance, I will miss the big rig racing that was actually quite fun, and without a doubt a far cry from that horrible big rig game that came out for the PC.

Online is fun as well. Events can be separated into three groups: time bomb, skirmish, and ruckus (Domination, Gatecrasher, and Last Man Standing). However, all the events can be chosen via Totality mode as well. I enjoyed racing online but did get tired of online gamers winning by spinning everyone else out. Thankfully Time Bomb mode is able to prevent that due to no contact.

Since DIRT came out, all of Codemasters’ racers (including the GRID series) have been gorgeous. DIRT 2 is no exception. Everything looks and runs amazing. Damage is realistically detailed, both in and out of the cockpit. Even the in game menus and loading screens deserve mention.

While I’m not a fan of the extreme games style music, the sound quality is excellent as well. Other racers will communicate with you during races to challenge you or even ask if you’re ok after a huge wreck. It almost gives the feeling as you’re part of a traveling race show, and despite being in competition, you’re all a close knit family.

Codemasters again proved to me that they are the masters of racing titles, especially on the dirt tracks. While it might not have the classic feel of the McRae series and some of the earlier modes are gone, DIRT 2 is still a blast to play. It also is a great tribute to a legend that I hope continues in future installments.

Cons: Not everyone likes the X Games format and will miss the classic Colin McRae gameplay. Big Rig racing from DIRT 1 is no longer around.