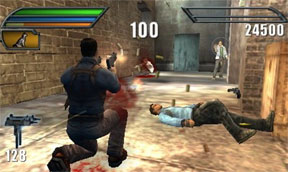 A few weeks ago, I reviewed Dead to Rights 2 for the PlayStation2 and Xbox. Needless to say I was not happy with the final product. The gameplay was repetitive, the sound was awful, and in general, it was a sequel that really didn’t need to be made. Was I too harsh with the review? Maybe. But I’m sure there are many of those that agree with me.

Now there is another version of Dead to Rights out for the Sony PSP, and believe it or not, it is actually worse that the PS2/Xbox sequel.

Even the storyline is plain vanilla. All it is about is how Jack Slate is trying to rescue a girl that is being held hostage, and what better way to rescue her but to blast his way through tons of baddies? At least Jack has his pet canine Shadow to help him out again.

But in the case of a PSP Dead to Rights, the storyline is missing something very important: spoken dialogue. All of the cutscenes are subtitled with no voices at all. On one side, it makes the game feel cheaply made, but then again, the voice acting of DTR 2 was so horrendous that maybe leaving it out might have been the best answer.

However on the PSP, the targeting system has taken a major step BACKWARDS!Not only does Jack target enemies that are not visible, the resulting camera seems to have a mind of its own. It is always rotating around, preventing players from getting the best possible view of the action. In the end, it feels as if Jack is fighting an evil camera operator in addition to all the baddies.

Visually Dead to Rights: Reckoning is passable. Each of the characters and settings are fairly detailed, but nothing to really write home about. There are some elements of slowdown during the gameplay which could detract from the overall experience (if the erratic camera doesn’t do so first.)

As mentioned before, there is no voice work done at all The only thing that consists of sound are gunshots and a very repetitive music track that plays constantly during the whole stage.Multiplayer is available, but as is the cast with most PSP titles, it is only available in ad hoc mode. Having the ability to play in infrastructure mode would have been nice.

Just like the console sequels, Dead to Rights: Reckoning is a sequel that wasn’t really necessary. The Dead to Rights series has been on a freefall since the original title, and I don’t see the trend changing in the immediate future. Granted the PSP is short of grade A titles, but sadly this is not one of them.