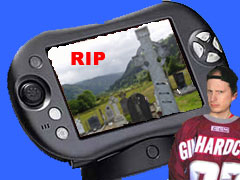 With the dominance of the Nintendo Game Boy lineup (original GB all the way to the upcoming GB Micro), and the recent uprising of Sony's PSP, the handheld market has been a difficult trend for upstarts.

A few years ago I witnessed SNK's Neo Geo Pocket/Color die an early death despite some great fighter titles (Match of the Millennium still ranks as one of my all time favorites, even leading to a Capcom vs. SNK series on Dreamcast and Xbox). Other handhelds such as the N-Gage QD have a niche market, but in all reality have not caused a dent in Nintendo's dominance, and Tiger Telematics' Gizmondo handheld was recently delayed to a vaguely termed "pre-Christmas selling period" launch, which in my opinion, spells certain doom for the UK-based handheld.

Just last week, another handheld met a fateful end. Tapwave recently closed their doors, and their Zodiac handheld is now discontinued. It is quite a shame. Even though I knew there wasn't even a snowball's chance in h*ll for Tapwave to strike a blow against Nintendo in the handheld market, the console itself was quite unique, and in my review last year, I felt that the Zodiac had great potential.

My first experience with the Zodiac came when I tested out a pre-release model at my editor's house. It was an impressive little handheld, had a larger, more vibrant screen than the GBA SP, and the 3D capabilities, though primitive compared to the PS2 and the Xbox, far surpassed anything I ever saw on a handheld. Not only did the visuals impress me, so did the sound quality as the built in MP3 player was quite impressive, even for a built in application.

I wanted to get my own Zodiac as a reviewable unit, and constantly asked my PR rep at Tapwave for one. The console was not available in retail outlets at that time (but was eventually available only at CompUSA), and it wasn't until E3 2004 that I got my own unit. Immediately after returning from Los Angeles was I able to go full tilt on it, and the results were impressive.

Considering the heart of the Tapwave was a modified Palm 5.2 OS, I already know that there would be tons of software support from the emerging Palm community, as well as hackers who would do anything to see what made the Zodiac tick. If it weren't for the Palm users out there, then there would not have been much to play with, considering there wasn't much in the way of first party software available.

That is a shame, because the Zodiac had some unique games exclusive to that console. It featured one of the best versions of DOOM 2 that I ever played (until the Collector's Edition of DOOM 3 came out on the Xbox), as well as an isometric Tony Hawk 4 that looked far superior to that on the GBA SP. I only wished that it controlled as well, because the analog stick was a bit touchy, to say the least.

However, as time went on, interest in the Zodiac started to wane. Talks of newer game releases turned out to be false hope, and Tapwave themselves even changed their marketing pitch from a Palm powered gaming machine to a Palm powered "multimedia handheld."

Nothing could be further from the truth, for aside from a game of Bejeweled 2 once in a while, the most I used my Zodiac unit for was that of an MP3 player, which I eventually updated with the impressive PocketTunes software. Then shortly afterwards, three little letters changed everything:

March 22nd 2005 came and with it, Sony's PSP handheld. Immediately all of handheld attention shifted to the PSP.

Not only did I have a new system to use as my MP3 player, but also to use as an improved video player (despite a pain in the butt file conversion system), a portable movie player, and a better supported game lineup. And with the arrival of an upgrade next Friday, including a fully functional Wi-Fi Web Browser, there was no need for me to get a Wi-Fi SD card. (Having only Bluetooth was one of biggest complaints.) Eventually my Zodiac was gathering dust on my computer desk, with the only known exception as a scheduler for all my E3 2005 meetings.

And then, it all ended. On July 25th, Tapwave posted the following message on their website: We are sorry to inform you that the Zodiac business was discontinued and service and support are no longer available as of July 25th 2005.

Truly this is a sad day for Zodiac owners everywhere, but in all reality, it was inevitable. While the system will live on via the Palm community, the Zodiac is dead to most gamers. Still, as a Palm handheld, there will still be some life after the end.