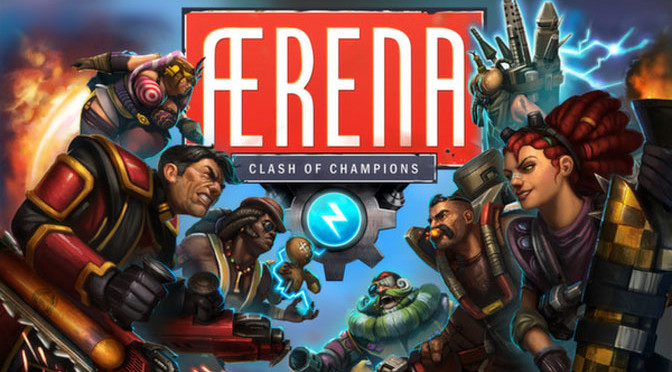 Another exciting battle for Aether, and here are its combatants! You’ll be hearing this phrase a lot in AErena: Clash of Champions, as it’s stated before every single match. MOBAs, or Multiplayer Online Battle Arena games, are a type of action based (normally) real-time strategy that puts players foreknowledge, critical thinking and reaction time to the test by having two teams of, “Champions” or player characters with specific roles and abilities, engage in combat with one another over control of the map. AErena isn’t your typical MOBA, however, as it’s turn-based so it’s is significantly less about reaction time than it is about tactically positioning your characters to maximize their individual strengths and minimize their own weaknesses.

The environment of AErena is steampunk as all get-out (well, AEtherpunk. Whatever): It’s set on a resource-deprived planet that’s saved by the forced discovery of a new power source. Now, upon discovering a new power source, what would people do with it? Use it in war, obviously. Rather than fighting large-scale war, however, competitions are now fought among small, bloodthirsty teams consisting of those whose favorite activities involve using steam AEther-powered mechanical arms to punch grandmothers and anyone else who looks at them funny.

The cast of playable characters is pretty small- a bit of a tiny roster for a MOBA, but everything has to start from somewhere and the artwork is actually quite impressive overall for something beginning so small. While the program of playables is paltry in comparison to the plentiful and prodigious competitors, you can be positive that they each have a particular kind of pizzazz, the persuasion of which is perfectly suited to a plethora of fan pictures should the game gain the popularity of competition- this last sentence used up almost the entire repository of words beginning in the letter P.

The Champions, the player characters, fight against one another on teams of 3 on the aforementioned arenas. They initially will seem very homogenous, but the small ways they differ is going to be paramount in clinching victory considering that a ranged character may only be able to attack directly ahead, behind or at the sides for 1-2 damage (while everyone else can attack at diagonals), but a melee character who can only hit panels adjacent to him can hit for 2 damage every single time. This makes a solid difference in long term damage potential, even before factoring in the special attacks each character can do.

The arena of AErena is actually quite small in comparison to other games with which this shares a genre classification- battle is conducted on a 6×6 grid, oftentimes carpeted about with poles that function as obstacles to block line of sight or tiles that have various functions. Being mindful of the attack ranges of opposing Champions is one of the best ways to stay ahead on such a small environment, though there are ways to usefully take advantage of characters who may have difficulty attacking due to enemy positioning by moving them to the various tiles for added bonuses. Some tiles will increase the AEther gauge of your ship or the combatant who steps upon it, while others may set the thoughtless character ablaze or even instantly kill them, which means that utilizing the helpful panels and shoving your enemies onto the negative ones is one of the most important aspects for victory.

Of course, it wouldn’t be fun if you couldn’t force your enemies onto the negative effect squares, and that’s exactly for what the two AEther attacks of each character are best used: Controlling your opponent’s movement around the field. Some characters may be able to extend their attack range, attack a 3×3 grouping for a set value of damage or even just shove adjacent foes back one space, which could mean tossing them off the stage (killing instantly) or into tiles that have negative effects. While utilizing characters who have these kinds of abilities, opponents must constantly be mindful of exactly where they can move safely or not by watching the threatening Champion’s AEther gauge.

Each character has a weak AEther skill, such as piercing two enemies directly in front of the Champion, to more powerful/dangerous ones that include tossing a grenade that deals damage to everyone in a 3×3 area. The Champions aren’t the only ones who can utilize an AEther gauge for special attacks, either, as the ship can be equipped with one-time use Shells that require a certain amount of AEther to perform a very powerful effect. Champions that stay alive for longer periods of time may also gain AEther at a faster rate.

Characters build AEther by beginning their turn or attacking (aside from stepping on the tiles mentioned above), which can make utilizing several of the weak skills easy because they only cost 2 AEther. The more powerful, and more expensive skills that take upwards of 5 require planning as they can be pretty dangerous but also have potential to damage your own Champion’s teammates. The ship builds AEther by dealing damage to the enemy craft or by defeating an opposing Champion, and while the AEther attacks you can utilize with the ship are powerful, they’re also permanently used up upon activation and you can only bring 3 with you.

After all of that having been said, the way you actually win the game is by sinking the enemy ship. This is done by either directly attacking the hull with one of your characters or by defeating enemy Champions which also reduces the health of the opposing craft a bit. This seems like an incredibly simple task but it’s actually much, much deeper than it appears to be on the surface, thanks in no small part to being given three introductory matches against easy AI opponents for a very brief tutorial and then shoved directly into an online match with someone who may have characters and a ship you couldn’t have even purchased yet because the store isn’t even open before the first match.

This isn’t to say that the game is pay to win: It’s not. Anything in the store can be purchased with in-game currency and, while it may take some time to get enough to purchase multiple Champions, not being able to even look at the opposing Champion’s skills and attack ranges before being thrust into an online match with a much shorter turn time limit was what annoyed more than anything else at the start as its a little on the unacceptable side. When there is a Champion can arbitrarily extend his attack range for significantly more damage, or that another can drag you across the map, potentially killing you on one of the instant-kill panels, you will find the need to take a moment to read what their skills say, but without the game telling you the time limit has been significantly shortened from the three tutorial maps you played you may inadvertently skip your turn and give a foe an easy win should he capitalize.

Not exactly a big deal, but those put off by the game after one match may wish to give it a couple more before declaring whether or not the game is worth your time, as very little is actually explained but due to the, at current, small number of playable Champions, it should be pretty easy to remember that the guy with three heads is also Sir Henry Chains Hang Low and can grapple foes in a straight line toward him to set you on fire or instant kill you on certain tiles. Being, “Thrown to the wolves” would be roughly adequate in explaining the AErena approach to showing you the ropes.

In summary: AErena manages to be great fun and full of strategic value for those willing to keep at it, much like any MOBA. The barrier of entry in terms of learning curve/difficulty may put off some, and the necessary time to grind for a different team may put off even more than the aforementioned issue, but at least the option to purchase shells, ships and Champions with in-game currency is there for those who’d prefer to do the bit of grinding. Beyond that, however, is a solid turn based game that seems relatively well balanced (at the moment. If they add a new Champion that stops time, pours Tabasco into everyone’s tea and then waves his bum at the camera, that’s on the developer, not me) and can remind any savvy strategy lover of Famicom/Advance Wars, XCOM, or even King’s Bounty to a mild extent, that turn-based multiplayer games can be a thing. Even if it’s an angry, hateful thing for the first several matches.