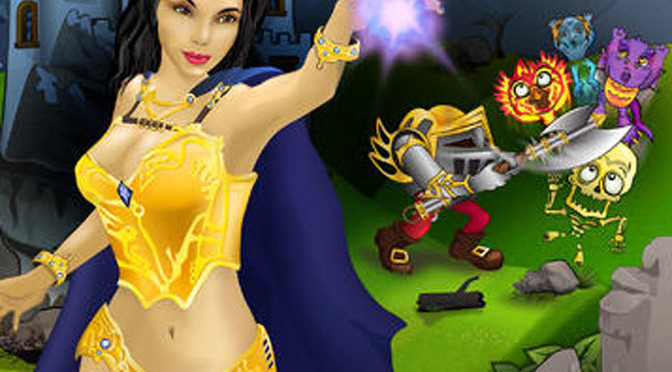 Puzzle games are a great way to pass time and engage your mind. There have been tons of puzzle games to choose from Tetris to Bejeweled. One of the most popular recent puzzle games is Candy Crush. But if you’re up for crushing something a little more interesting than candy, Smash the Evil for iOS is a great puzzler, with cute 2D graphics.

In Smash the Evil there are dragons and other mythical monsters that have to be smashed. This game is similar to Bejeweled except with monsters, which are, let’s be honest, more awesome to smash than jewels are. The player has to match three or more monsters in a row either horizontally or vertically. Then the monsters vanish or are “smashed.”

The difference with Smash the Evil is that on some levels the player has to drop a sword in a designated area and the only way of doing that is by titling it in the reverse direction of the monsters you’re trying to smash, which makes the sword drop in that direction. When the player gets four or more monsters in a row different special actions are triggered. Four in a row triggers a small explosion. With five in a row, a barbarian attacks the monsters either vertically or horizontally. Six in a row triggers multiple barbarians that smash multiple monsters in various directions.

The pros of this game are that it has dragons and various other monsters as the puzzle pieces, which is cool. The player gets different power ups as the game progresses and the different actions triggered by over three in a row are fun. The game has in-app purchase options to obtain more of the power ups, which is expected these days.

The cons of this game are that Smash the Evil sometimes gives you a hint, which is both a little distracting and sometimes problematic because the hints aren’t the right choices. Also the power abilities are essential for beating some levels. If the player has none, the levels will be much more difficult. That kind of makes this a pay to win title, but not to a huge degree.

Puzzle games are great to pass the time and engage your mind more than some of the other casual games out there. Smash the Evil is fun for people who like the Middle Ages or dragons and monsters, or who are just tired of crushing candy.

Smash the Evil earns 4.5 GiN Gems. Sorry to have to put gems back into the mix, but there you are. We’re sure you will have a lot of fun with this one.