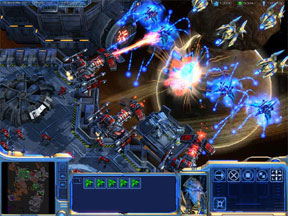 "I WANT STARCRAFT II!" That was how I ended my review for Warcraft III…eight years ago! Since then, Blizzard spent most of their time directing their efforts to World of Warcraft, leaving me high and dry for the game I longed so much to play again. That is, until 2007, when Starcraft II was finally announced. At first my reaction was sheer joy, as I still was involved in PC gaming. But as time went on several factors started to draw me away, such as the constant delays (a Blizzard tradition,) the limitations of DRM, the crippling of LAN gameplay, region locking, and most of all, limiting the game’s campaign to one faction.

But despite all of that, I decided that for a game that I coveted more than any other on the PC (or in this case, the Mac,) I would ignore all my prejudices, try out Starcraft II, and hope that it would run on my system AND still be the same exciting sci-fi experience that SHOULD have won our first ever GiN Game of the Year honors.

Much to my pleasure, not only does Starcraft II run on my MacBook, but the whole experience is amazing. Everything I loved about the 1998 Hall of Fame title is back in full force. While the game is actually out 12 years after the original, the story takes place only four years later. Little has been heard of the Zerg since the Queen of Blades, former Terran Ghost Sarah Kerrigan, retreated her forces back to Char. And the Protoss have retreated to Shakuras. Meanwhile, the Terran Dominion is now run by Emperor Arcturus Mengsk, and he uses his position to combat any opposition. One such opponent is Jim Raynor, Terran Marshal. Using propoganda via the UNN and its head anchor, Danny Vermillion (a parody of Ron Burgondy) Raynor is labeled a terrorist to the Dominion. Raynor and his army, the Raiders, vows to take down Mengsk’s rule, and is joined by recently released convinct Tychus Findlay, as well as Matt Horner, second in command of Raynor’s flagship, the Hyperion. Dr. Ariel Hanson, who provides Raynor with research upgrades based on Protoss and Zerg technology also joins the crew, as well as pirate Gabriel Tosh, providing Raynor with missions to extract valuable minerals for extra income.

In place of the linear mission structure of the first Starcraft, the order of missions can be selected from the Star Map located on the Bridge. While missions do include the usual "destroy the base" or "survive for XX minutes" route, there are also original missions available. One of my favorites is called "Cutthroat." In it, a mercenary is offering her services to Raynor and a rival faction, depending on who can come up with 6,000 mineral points first. Should Raynor succeed in beating out the rival, the action heats up as the rival immediately attacks your base, resulting in a massive battle including the newly hired mercenaries. It’s a highly entertaining mission that’s only a taste of what the game provides.

And speaking of good tastes, Starcraft II is perhaps the PC/Mac RTS equivalent of a Reese’s cup. The outside features the excellent, fast paced and highly addicting combat of Starcraft, but inside that is the same type of story-driven narrative and NPC navigation of another once great series, Wing Commander.

Navigation takes place on four screens: the Hyperion bridge (where you select your mission, play through past missions and cutscenes, and speak with Horner,) the armory (where you purchase upgrades for your bases, infantry and vehicles,) the laboratory (where you speak with Hanson about researching Zerg and Protoss technology for unit upgrades,) and the Cantina, where mercenaries can be hired, as well as hearing news from the "fair and balanced" Vermillion.

The cantina is where I spent most of my between mission time in the game, not just for what was listed above, but because I loved hearing the redneck style music coming from the jukebox. Whoever decided to add covers of Lynyrd Skynyrd and Elvis Presley songs in Starcraft II is a certified genius. I never thought it would fit, but it does. There’s even a fun little minigame shooter called Lost Viking (named after an early SNES/Genesis side scroller from Blizzard) which has your ship facing off against three stages to face the dreaded Terra-tron, and yes the instructions are correct: HE DOES NOT LIKE YOU!

The storyline and dialogue are top notch. While most of the cutscenes are shown with the in-game engine, there are some FMV scenes as well and they, like the ones used in Warcraft III, are stunning. Blizzard knows how to do CGI! In addition, the in-game’s graphics, even on the lowest setting, are very impressive. Unfortunately higher visuals come at a high cost, as the system requirements are very high. On my test system, I was only able to play the game fully in low detail, changing the portrait images to a static 3D image. Thankfully though, on low detail the game ran very smooth, only bogging down when starting up a mission. I will admit my MacBook only has 2 GB of RAM, and an upgrade to 4 GB should fix this.

The game ships with both the Mac and PC code right there on the same disks, so whichever you have, you should be able to play as long as your rig is up to the specs.

The audio is also worth mentioning again. In addition to the great tunes in the cantina, the in-game music features that classic Terran feel I experienced when playing Terran 3 in the original Starcraft. Even the music and voice acting that takes place at the INSTALLATION screen is a treat to listen to. It’s very epic. The same great voice actors from the first game have returned, with the exception of Queen of Blades Kerrigan, now voiced by sci-fi legend Tricia Helfer. A lot of production quality went into it and it shows!

However, if you’re not a Terran fan like I am, and favor playing the Protoss or Zerg factions, you’ll be disappointed. With the exception of a few Protoss missions, the retail game, Wings of Liberty, centers on the Terran campaign. Expansion packs are scheduled to come out that will finish up the other two faction campaigns, and considering how good Wings of Liberty is, I would have no problem purchasing them, even though as I said before, I’m a Terran at heart.

A lot of criticism has come out from LAN addicts, as Starcraft II has removed LAN based gameplay. This is a disappointment to them, and the game also has region locking. I guess I won’t be taking on any of the Korean champions, unless they come to this region and play me. DRM comes into play again. Only one game can be linked to a players Battle.net account. This can be a problem for many, but thankfully it doesn’t have the limited installations that we are used to from SecuROM.

One has to wonder if these copyright-based additions were done as a result of the Activision/Blizzard merger, but for someone like myself who doesn’t play PC games anymore, this is little concern to me, though we can see people being upset at not being able to play at LAN parties, which was a true staple of the first game. Technically it could still be done, but everyone would need to have an Internet connection and link up to Battle.net and then back down to the LAN party room.

Anyway, what matters to me is that the Starcraft of old is back. But it’s also better than before. Integrating Wing Commander quality navigation and cutscenes, upgrading units between missions, and just playing around in the cantina made Starcraft II exceed all my expectations. Compared to 1998, Starcraft II will feature some true competition for our Game of the Year awards (namely Red Dead Redemption) but it has a very good shot at stealing the crown!
Now, about those expansion packs…

PROS: Twelve years well worth the wait! Core gameplay stays the same as the original, while adding new features to enhance it (research, mercenaries, and upgrades.) Wing Commander style story navigation combined with amazing voice acting. Fleshed out campaign that will appeal to fans of the Terran campaign. Large variety of missions. Amazing cutscenes and in-game visuals…

CONS: …that come at a price under heavy system requirements. Limitation of only one CD-Key linked to a Battle.net account. New Battle.net locks regions and removes LAN play. Fans of the Zerg and Protoss armies will have to wait for the expansion packs for their campaigns.

Editor’s Note: Game played on a MacBook (Late 2009 model) using Mac OS 10.6.4 software played using the most recent Battle.net patch and also tested on PCs. This review of Starcraft II covers the single player campaign. There is also a full multiplayer engine (of course) that we are only barely scratching the surface of at the moment.