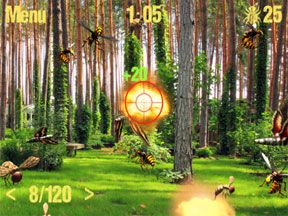 I can’t decide how I feel about augmented reality games in general. Are they a clever use of phone and tablet cameras to create realistic backgrounds, or are they just a sign of lazy developers unwilling to invest the time to create a backdrop for their games? I’m not sure of the answer in general, but I have specific opinions about Bugs Mayhem, which follows this trend.

To be sure, the idea of annoying bugs flying around a backdrop that is your living room or bedroom or (disgustingly) where you’re waiting for your lunch is a good use of the camera to provide the backdrop of the game. It also adds another layer of difficulty to this shooter. The more complex the backdrop is, the more difficult it is to register your target, particularly the smaller bugs like the mosquitoes. As an aside, I get a lot of personal satisfaction every time I kill a mosquito in the game or in real life, very satisfying.

You’re docked points for killing butterflies. Butterflies are pretty and benign. Don’t kill those in real life either. This is all good stuff and surprisingly challenging because the temptation is to try for the hornet in the midst of the butterflies and if you miss you’re docked points. Accuracy matters in this game, so don’t just shoot and shoot. You have to take your time and aim.

Unfortunately, Bugs Mayhem falls down on the internal targeting mechanism of the game. Sometimes I tap to shoot and the screen doesn’t recognize my tap or there is a delay between tap and shoot so it’s a miss. I played this game a lot with a variety of hand positions to verify that it wasn’t just me needing to learn the mechanism. It’s an actual problem. Hopefully, one that can be corrected in future updates.

The only other issue I have is with the graphics of the bugs themselves. They’re very flat and in some cases crudely drawn, which is particularly noticeable against the real backdrop. Perhaps this was to make them stand out more against what could be any background, which explains them looking very 2D, but there is no excuse for the crude drawing. The audio for this game is just buzzing noises, which gets annoying pretty quick, so I mostly played with the sound off.

In short, Bugs Mayhem is fun, but not perfect, and unless its imperfections are corrected it’s going to get old pretty quick. Look for updates before you get this one.