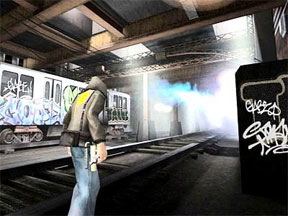 Marc Ecko's Getting Up:
Contents Under Pressure

In Marc Ecko’s own words, "Getting Up: Contents Under Pressure" was conceived as a celebration of one of the most powerful art movements in recent history.

Rising above the fact that there will always be those who refuse to see "graffiti" as nothing more than filth, Marc chose to create a game that would be true to the culture and reflective of the talented writers who lent their personal time and effort into the project. A project supposedly in the works for at least seven years, "Contents Under Pressure", couldn’t be more true a theme for this kind of game.

One of the stronger line up of games in the first quarter of this year, "Getting Up: Contents Under Pressure" dared to wow the gaming community with a dynamic visual presentation, a solid gameplay engine, and more in importantly a wealth of originality. Let’s take a look back at what made this title so successful.

The plot of the game is focused around an "outcast/aspiring graf writer" from around the hood, who goes by the name "Trane." After catching a beat down at the hands of a local rival gang, Trane is determined to lash back out at these haters by getting his "tag" up all over the city and perhaps in the process earn himself a legendary reputation by becoming officially recognized as the "All City King" in the "graffiti underground."

Ironically, Trane will get a little more than he bargained for as what turns out to be nothing more than an act of vengeance takes on a whole new form later down the line that includes an "intellectual" stand against the government.

The game is staged on the mean streets of "New Radius," sort of an alternate urban universe set sometime in the near future. Marc Ecko describes the city as a blend of the cultural and architectural details of New York during the golden age of graffiti, combined with such stacked over-populated cities as Kowloon, Hong Kong. He goes on further to describe New Radius as a vertical city, which when combined with Tranes athletic abilities, makes for the ultimate urban jungle.

New Radius is ruled by a corrupt Mayor who recently won an election based on promises to clean up the city but now seems more interested in silencing free speech. With the help of his heavily armed battalion known as the Civil Conduct Keepers or CCK, Mayor Sung has declared graf writers public enemy number one. More so, a certain graf writer who goes by the name Trane. Over time Trane slowly uncovers some deep and personal secrets about the Mayor and realizes he can use his skills to not only turn the tables of the system in his favor, but reach "legendary graf writer" status.

First impressions of gameplay are most likely going to remind you of the "Prince of Persia" series. However, in this case that’s definitely not a bad thing. Trane is not only gifted with the ability of expressive writing but he’s also got a few athletic tricks up his sleeve. In order to get his tag up in those hard to reach places Trane will have to climb drain pipes, shimmy sideways along ledges, tight walk narrow beams, wall jump, and even perform aerials from the hanging position.

On the ground he can open up a small arsenal of punch and kick moves and some occasional stealth tactics to defend himself from CCK troops and rival gang members. Later down the line as you progress through the game you be able to advance your basic close combat tactics as you pick up new tricks like torching the opposition by turning your spray can into a makeshift flamethrower or using "insult moves" to humiliate your enemies by slapping them in the face or stomping a mudhole on them with your size 12 timberlands.

Even though the game is full of cool violent heroics, the main focus of the title is still not lost: getting your "tag" up. Your tag is your personal motto or your "alma mata." It’s more than just how you "say" it. It’s also how you "spray" it.

Thankfully, the artistical aspect of the game is fairly easy to grasp with just a little consistent practice. Trane can decipher various locales eligible for tagging by using his "intuition" skill to highlight places that might have been otherwise overlooked. Once you’ve maneuvered Trane into position you can activate his tagging stance by moving the right trigger button. Once the process is started, depending on the size of the area players can fairly easily navigate the canvas using a combination of the directional pad and analog buttons. To add some real excitement and fun to your graf writing experience you’ll be challenged with a variety of conditions to perform under such as staying within the parameters of the canvas, getting your tag done within a limited amount of time, and also how much paint you may or may not drip during each session.

To help keep things that much more interesting, players will have a chance to work with a variety of graffiti gear including markers, stickers, aerosol cans, wheat paste, and even stencil.

The artwork that’s been pumped into this title is visually stunning and impressive within itself. The game boasts authentic tags from over 50 gifted real-life artists, six of whom you can encounter as mentors in the game who will graciously lend out their own personal tags to help an aspiring graf artist like Trane climb higher up the ladder of success. Top-notch artists such as FUTURA, Seen, T-kid and the likes all make debuts within the game. You can store new tags and graphical images within the game onto Trane’s personal digitized "black book" to be used in future writings.

A top-notch soundtrack compromised of superb voice-overs and hot urban tracks help to round out a very solid game all around. A man outstanding in his field, Marc Ecko wisely chose P. Diddy to put together a list of artists to assemble a banging mix of hip-hop that seamlessly influences the tone of the game. And Ecko didn’t just stop there. He even went out and hired a respectable cast of artists/actors, including Adam West, Brittney Murphy, Rosario Dawson, and Giovanni Robissi to help drive the games intriguing story plot home.

The Bottomline? The overall presentation of the game is very solid. Graphically the game boasts a visually stunning display of authentic art from real life writers which is an accomplishment in itself. There are quite a few memorable cinematic moments in there as well that contribute to a worthy graphics department. The sound track is killer, sporting a sweet buffet of hip-hop beats and even the voice-overs are profoundly good. Lots of love goes out to the audio department. More importantly, is the very fun and addictive gameplay engine which offers up a wealth of originality. This isn’t a game that should even remotely be thrown into the same basket as say a game like "Jet Grind Radio" The world of graffiti has never been portrayed like this and I’m backing that statement up with my own personal tag: 4 solid GiN gems.