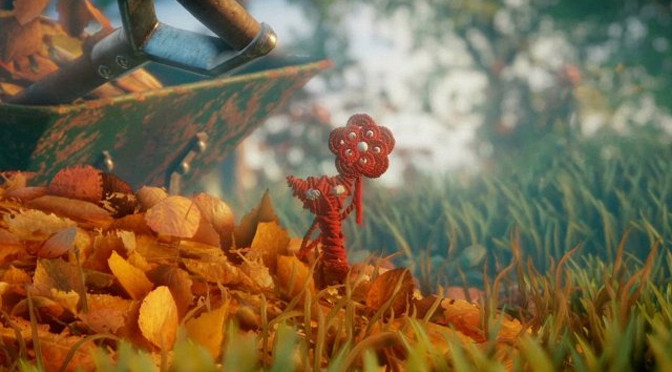 I don’t often pick up a game based solely on the strength of a trailer. Usually I want to see a gameplay video, or some developers’ walkthroughs before I plunk down my cash. But Unravel had me almost at just the first still picture, and I was queuing up the purchase immediately after the trailer.

There’s no doubt EA recognized an easily marketable figure and image in Yarny, the adorable, distinctive protagonist of Unravel – a palm-sized vaguely humanoid little guy made out of wrapped-up red yarn. If you’ve heard Yarny’s name at all, you know you’ve been reached by EA’s marketing, as his name is never once mentioned in the game (there’s no spoken words in the game at all). But for once, the marketing doesn’t oversell the product, because Yarny truly is adorable. The attachment you come to feel for this weird little guy is a large part of what makes the game so endearing.

I’m not a huge fan of platformers, but I’ll play them when the concept and setting is colorful and original enough, and on that front Unravel definitely delivers. I can’t say how Unravel will play for the die-hard platformer, but for a casual fan of that genre it’s a sure winner, and so much about the technical and artistic execution of Unravel is great that there should be something for almost everyone to appreciate, at least to some degree.

Unravel’s strongest point is certainly its visuals. The game is broken up into levels like chapters, each set in a particular outdoor environment. The game is clearly a loving ode to the beautiful Swedish landscapes held dear by its designers, set mostly in forests and seasides, tree tops and berry patches, in golden autumn light or crisp winter snow. These places are simply stunningly rendered, with a degree of attention to detail and lighting that makes them as close to photo-realistic as any game I’ve seen. The gorgeous graphics made for a degree of immersion far beyond what the gameplay maybe merited; I found myself looking forward to playing the next level as much for the atmospheric experience as anything else. There were times I genuinely felt like I was taking a stroll through the woods while sitting in my chair.

Adding to the atmospheric experience was the soundtrack, a lovely and mostly acoustic soundtrack of Swedish fiddle and instrumentation. If you’re a soundtrack collector, Unravel might be worth a playthrough just for that alone. The music is always gentle, but rich and engaging, admirably setting the emotional tone for each level and scene – and it has to, as there is no dialogue to do this, and little else in the way of cues to clue you in on what you ought to be feeling.

The hazy story, if story it can be called, is one of Unravel’s weakest points. It seems to be trying to take you on the journey of one family’s life, but if you are trying to keep track of events or looking for a particular plot clue, you are going to be disappointed. I ended the game unsure of what the game had been trying to tell me, or if I was supposed to have been able to piece anything together at all. The fact that I care at all about Yarny’s struggle to make it through the wilderness on his journey to collect an old lady’s lost keepsakes is entirely due to his endearing character design, and nothing to do with the story’s execution. I think I can see what the developers were going for, and I give them an A for effort, but in the end telling a fundamentally very human story with very little in the way of actual humans to be seen in it is just rather tough.

In a platformer, though, a weak story isn’t really going to ruin the game, and when it comes to the gameplay itself, Unravel does decent job of making a fun little platformer.

The mechanics are simple enough: jumping and climbing with the aid of yarn lassos to whip you about, and yarn bridges to cross over. The fact that the yarn also spools out from Yarny’s own body is a colorful plus, with one added bonus that helps to shift some of the puzzles form “simple” to “moderate” – namely that your yarn is finite, and if you reach the end of your tether you just can’t go any farther. This does force you to think a little more carefully than you might normally do.

There were multiple times where I found a solution to a puzzle, managing to navigate the landscape to get where I needed to be, only to discover that my tether had ended two inches short of the next yarn-reload checkpoint. This meant that I had to backtrack and look for a new, more efficient way to solve the puzzle, which I never minded because spending more time in the gorgeously rendered scenery never felt like a chore. It also added some gameplay time to what might arguably otherwise be too short a game.

Unravel is comprised of about ten levels, and if you are a platformer veteran they will probably speed by all too quickly. I averaged about 40 minutes per level, but that was taking my time, poking about, and sometimes even just pausing to enjoy the music and the excellent soundscaping that brought the rustling trees or lapping water to life. Someone more focused and experienced with platformers could probably blaze through each level in 15-20 minutes, which means you may not be getting a lot of bang for your buck if a game’s length weighs heavily on your scales. If that’s the case for you, then you probably won’t get a lot of replayability out of the game either. Even on my casual playthrough I picked up more than half of the game’s easter egg “treasures,” and although there were a couple standout puzzles and zones that did present an enjoyable challenge, any replay dedicated to grabbing the final collectibles will probably go just as quickly.

But while I won’t be rushing to replay Unravel immediately, I’m also not rushing to remove it from my Xbox hard drive. Unravel may not inspire a sense of burning completionist desire or present a challenge that one is chomping at the bit to retackle, but that isn’t necessarily a condemnation. Instead, I found myself feeling quite sure that I would want to play it again “someday,” maybe in a few months, maybe in a year – or whenever I want a game that I can just relax into and enjoy. It may very well become my go-to game for those bad mood days when I just want something to clear my head. If ever a game could recreate the feeling of taking a refreshing stroll through a fragrant park or backwoods, it’s Unravel. It may be the best after-work unwinding game I’ve ever come across… pun not intended, but delightfully apt.

Probably the best way to determine if Unravel would appeal to you is just to find a trailer and watch it. If you feel any sort of tug of interest at all, if you found Yarny cute or intriguing, or the imagery lovely, then you are almost certainly going to enjoy your time with the game. In this case, what you see is definitely what you get – and what you get is a charming, endearing little game that won’t strain your gaming muscles much, but will still keep you engaged enough with the puzzles to hold your interest, allowing you to enjoy a journey through the Swedish countryside with one of the most uniquely designed game protagonists of the last decade.

Unravel earns 4 GiN gems for delivering almost exactly what it promises, and if you feel the game has ended before you’re ready to say goodbye to it, that can be taken as a testament to its strengths as much as to its weaknesses. ColdWood Interactive is definitely a studio I’d like to see more from.