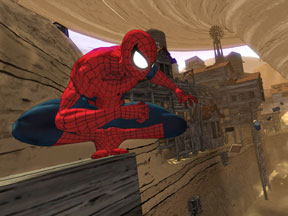 I’ll admit I have never been the biggest Spider-Man fan. Sure I enjoyed the first two movies (especially the second, as I still can’t believe that Sam Raimi did a good job in making Doctor Octopus a likable villain that we show sympathy for) but then there was the disaster that was Spider-Man 3. As if the storyline wasn’t bad enough, there was also the severe underdevelopment of Venom. But the movie can be summed up in three words: Emo Peter Parker.

As far as Spider-Man games are concerned, it’s the same story. I’ve dealt with the good in Spider-Man 2, as well as the bad in Spider-Man the Arcade Game for starters. Thankfully Shattered Dimensions falls in the good part. It’s not the best, but it’s well worth the price of admission.

What makes Shattered Dimensions different from the rest of the games is that you control a different type of Spider-Man. Or should I say, different types. And that is the result of a very impressive backstory. Mysterio steals an artifact known as the "Tablet of Order and Chaos," but during a skirmish with the "Amazing" Spider-Man, the tablet is broken into several pieces, and results in a rift with several of the Marvel Universes. As a result, Spidey’s ally, Madame Web, tells him that he must team up with all of his alternative universe equivalents to restore the tablet and correct the rift.

With this story mechanic, we get four different forms of gameplay. There is the previously mentioned "Amazing" Spider-Man whose attacks consist of both physical and web-based abilities.

Then there is "Ultimate," who is based on the black symbiote costume that eventually creates the villain known as Venom, but for the game Peter has enough control of it to prevent it from taking over his body. However the suit allows him to unleash powerful rage combos.

Then there is the persona of Miguel O’Hara, aka Spider-Man 2099, a specialist of close quarter combat enhanced with accelerated vision to allow him to evade attacks more efficiently.

But my favorite has to be the Noir version of Spider-Man, as his attacks are more stealth based. He must stick to the shadows and use them and his Web attacks to surprise his foes. It’s almost reminiscent of Batman: Arkham Asylum.

The variety of the four main characters is quite impressive, as is the variety of enemies they must encounter, including the likes of Kraven the Hunter, Vulture, Sandman, Electro (who for some reason in this game looks a little to close to Doctor Manhattan from Watchmen), Hammerhead, Deadpool, Juggernaut, Carnage, and even a female version of Doctor Octopus, as well as the main villain Mysterio.

The only problem is at times the path leading to the villains can be a bit repetitive. Not only in the amount of combat in the game, but some of the side missions available. They end up being the likes of "rescue X number of people and drop them off at this spot" or "destroy Y targets." It does tend to get tedious, which is a shame, because the boss battles are very entertaining. There are even a few that require first person hand to hand combat, and it’s a blast to take part in.

I do have to mention that in addition to the repetition in mission mechanics, I also had to deal with some control and camera issues, especially in the Noir stages as Spidey tends to stick to the walls a bit too much. It’s disorienting but doesn’t completely kill the game.

Each of the universes also have their own art style. Both Amazing and Ultimate feature high quality cel shading, 2099 is flashy and futuristic, but keeps a realistic feel, and Noir’s dark environments help fit the stealthy pace.

Another strong mark has to come in the game’s voice acting, particularly for the four Spider-Men. In a unique twist, all four voice actors have played Spider-Man previously. Amazing is voiced by Neil Patrick Harris (from the CGI series), Ultimate is voiced by Josh Keaton (from the 2008 Spectacular series), 2099 is voiced by Dan Gilvezan (from Spider-Man and his Amazing Friends, as well as the original voice of Bumblebee from Transformers), and Noir is voiced by Christopher Daniel Barnes (the 90s Fox animated series). Villain talent is also excellent, provided by Jim Cummings (Kraven the Hunter), Tom Wilson (Electro), Fred Tatasciore (Carnage), and David Kaye (Mysterio), to name a few.

However, I have a beef to pick with one actor, and I know I’ll get a lot of heat for it. Nolan North’s performance of Deadpool is perhaps the most annoying character I’ve ever heard in a game. Yes I know about his talent, which I will not deny, but this role just got on my nerves, as well as his stage, an oil rig that has been turned into a giant game show. A few of my friends told me that the character of Deadpool is like this in the comics, but still, all I wanted was to shut him up permanently.

Shattered Dimensions takes up about ten to twelve hours to play, and features a ton of unlockables, including character bios, figures, artwork, and alternate costumes. There is plenty for Spider-fans to be interested in. But for the rest of us, it’s a very competent action adventure well worth the price of admission, especially for just the boss fights.

Pros: Each Spider-Man character has his own unique game style. Amazing visuals that match each of their settings. Huge assortment of classic Spider-Man villains, culminating in epic boss fights. Some of the voice acting and dialogue is top notch…

Cons: …but some is also annoying and cringe-worthy. Even the varying characters have the same repetitive stages. Some camera and control issues.