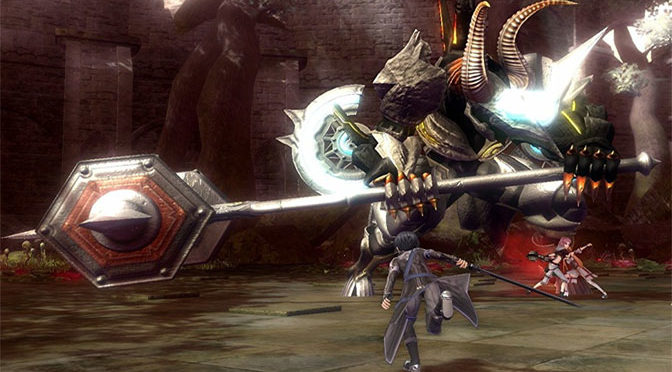 Plot: This entry in the series isn’t like the other entries in the series in that it takes place in a completely new game unseen in the series thus far. However, when taking into account that the videogames split off from the canon story of the right from the get-go and certain events that needed to happen to allow for later “games” to be made in the SAO universe, like Gun Gale Online, didn’t happen I’m not too upset at the lack of imagination on the parts of the developers with making Hollow Realization take part in a game that copies pretty much everything from Sword Art Online except for a few parts.

Now as the for the actual plot, I enjoyed it immensely. However there are some things that took away from my enjoyment of it which I’ll cover below. The plot itself is quite interesting and while I won’t touch on details because it will spoil the plot, I do have to say that it was fairly original for the SAO universe, although not completely original.

Characters: The cast from all the previous games show up for the most part, although Rain and Seven from Lost Song have yet to be added to the game there will be future DLC that will add those two characters. The real newcomer to the cast, Premiere is quite a good character in and of herself, but I won’t spoil the why for you. However, she ended up being my favorite newcomer to the rather large cast of the game.

Translation: Now I normally don’t have a full section in my reviews of games dedicated to the localization aspect of games made in foreign countries. Mostly because they don’t screw up as bad as the localization team did with the Sword Art Online games. For a studio that also produces the Tales of Series and localizes them incredibly well, I’m frankly disgusted with the manner in which they handle other titles.

For example in one part of the game where Kirito is interacting with another character he says “Good Job” in the Japanese Dub. They could have translated it straight from that as Good Job, instead they chose to use “Kudos to You.” If that is confusing let me state that there is no option for English voicework, it’s all in Japanese with subtitles. So when Kirito states “Good Job” a clearly English loan phrase, instead of going with the obvious “Good Job” as the translation they used “Kudos to you” It broke the suspension of disbelief for me. While I may be among the minority due to my understanding of the Japanese spoken word when using a word that is spoken in English you don’t really need to translate it for English speakers.

This is among some of the more flagrant issues with the translation, but this isn’t the worst part. Hollow Realization brings back the “Dating Sim” aspect of previous entries in the SAO game series that was absent in Lost Song, and when you have to actually interact with the characters and you make mistakes due to translation errors in agreeing or disagreeing during a “Date” it is very frustrating. It doesn’t do anything to bring newcomers to the series, and while I know that Hollow Realization is really aimed at the hardcore SAO and Anime fans, it doesn’t speak well of Bandai Namco’s localization team to have such errors in a very vital part of the game. Unfortunately due to those same translation issues it also hurts the gameplay. If I were better able to understand the written portion of the Japanese language I would have been better off importing the game, but sadly I don’t.

[amazon asin=B01HQGWL3E&text=Enter the world of Sword Art Online with a copy of Hollow Realization from Amazon.]

Gameplay: Now excepting for the translation issues I mention above, the gameplay is pretty solid. The game allows for you to “train” your party members in doing certain actions and this actually works out really well, if you can maneuver around the translation issues. Frankly most will have to look up guides online to figure out how get their NPC party members to do what they want. The gameplay is actually quite solid and fixes a huge part of what made Lost Song frustrating in that it allows you to improve your ability to cancel animations in order to do different actions, like guarding or evading an attack.

In addition to that they also added the ability to add every NPC non main cast member into your combat party, which was quite interesting. While they tend to be less effective than the known crew Kirito hangs out with, it was a rather interesting addition for the RPG formula to allow nearly every character in the game to enter your party. Another thing that impressed me was the ability to command the “Raid” group during Boss Battles. You get a large group of NPCs that will assist in you beating the incredibly large bosses and it works out surprisingly well. However it did make the boss fights a bit easier, although it may just be my own mediocre MMORPG leadership skills coming into play.

One last thing that they changed is the ability to change “Kirito” into a completely custom character, and it ended up with a surprisingly decent character creation screen. Compared to Lost Song having essentially no customization whatsoever I was rather impressed. However compared to games like Final Fantasy XIV, or Skyrim, it was only mediocre at best.

Art: The art for the game is pretty great for a game that is on both the Vita and PS4, and while it will look out of date in a few years, I did like that they added the ability to go into first person mode in the town.

Overall: If you are a hardcore SAO fan you’ll probably love this game, however for those who just want a decent RPG to play you’ll find Hollow Realization to be more frustrating than it’s really worth.

For those who like: Sword Art Online, Anime, RPGs, Dating Sims, Games with thousands of hour of play potential.

Not for those who don’t like: Any of the above, or very poor translation jobs.