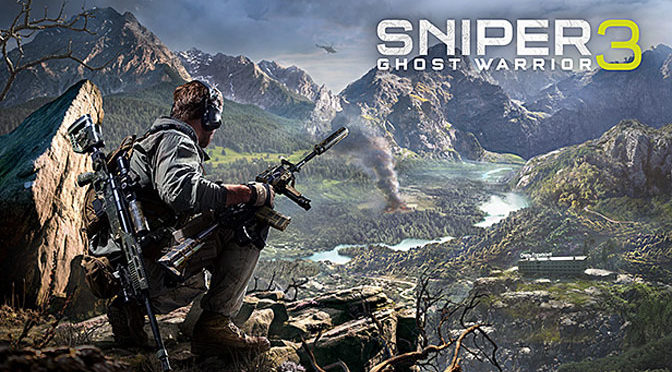 The first person shooter game Sniper Ghost Warrior 3 is due out in April. The game drops you into the boots of Jon North, an ex marine and sniper, now working out on his own. Though I have not played the first two installments of the series, from what I have seen in this beta, I was able to jump right and it looks like it will be a good stand-alone game. After playing the beta I was impressed.  Its a a great open world title with gameplay focused on realism and action.  For this review, as its only a beta, we give it 2.5 GiN gems as a placeholder score only. The full score will come with a review of the complete game.

First off Sniper Ghost Warrior 3 is an open world game taking place in the country of Georgia. I was most impressed by the amount of detail put into the environment. There was no issue with the graphics and the game ran very smoothly. During the beta I didn’t see any cut-scenes but rather was thrown into the mission and gameplay. Therefore this first hand experience was more about how the game played. For these games too many cut-scenes and story can ruin the military feel so the beta was a good first impression.

I did have contact with other characters who guided me during the mission. This is always an added bonus in unfamiliar territory and understanding the next objective. This interaction also tends to bring more to the story.   One of the big surprises was when running through the two missions available I did not encounter any bugs or lag. In fact the graphics were amazing and ran very smoothly. This impressed me because I was expecting something to be wrong.

During my beta play I was able to capture every detail of the environment, characters, and my weapons. The weapons were modeled well and had a realistic look to them. Even the ammo was individually modeled. Speaking of weapons, even in the beta I had a variety of different ammo to choose. The weapons were limited but it did not matter when the player has an arsenal of explosives, variety of rounds, and some cool gadgets to play with. The only weapons available were sniper rifles, hand guns, and assault rifles. Honestly you don’t need anymore then that, maybe  a machine gun but my AK-47 was quite effective in firefights.

One noticeable thing was the  environment changed constantly. One minute it was sunny, then cloudy, dark, light rain, then heavy downpour. Now it may be that some players might feel that the change in weather can be annoying or the rain is a nuisance. However, I took advantage of the environmental change as much as I did with the environment itself.  Though, rain and wind can have a detrimental effect on sniping it can be advantageous to sneaking around enemies and getting close to your objective without being spotted.

What I learned from the beta is that you are not just a sniper in this game. As the title alludes, you can be a sniper, ghost and warrior.  The game allows players to add skill points to the three trees allowing a player to use all three abilities to complete a mission.  You can’t always take out a target from afar as a sniper and sometimes close quarter kills or a frontal assault is more practical.  Although, during the beta missions I tried to use stealth attacks as often as possible. Good thing there is plenty of cover and my pistol has a silencer.  No matter how little the beta showed of the game I felt it was challenging and felt like a real.  Most of the time I took command of my environment and used skill to complete an objective.

Lets talk about being a sniper.  The best advice I can give is to find the best vantage point, usually a high point within your line of sight of the enemy but behind cover in the prone and out of their direct view.  Remember as a sniper you have the ability to strike from great distances.  Also the map does show your line of sight to an enemy while aiming  through the scope.  Another thing to watch out for is wind and adjust accordingly. In the beta there was the ability to adjust the scope and zoom in or out of a target. One of the most important aspects of the perfect kill is breath control. The beta had the player control the rifle with a very steady aim and controlling the breath to get the best and cleanest headshot.

To verify your kill the map identifies the downed enemy with a skull. Just because you can silently take out an enemy doesn’t always mean other enemies won’t be alerted. Alerted enemies change orange, and a red indicator means enemies know your position. White indicates they are not aware of your presence. Having this on the map and the floating marker above the enemies is great for stealth.

Now one of the things I did notice in the beta was it doesn’t take long for an enemy to take you down. The good news was Jon was able to regenerate his health quickly once out of sight and behind cover. Med-packs help a lot too.

All in all the game felt that it was made for stealth and sniping. However, with an assault rifle available there is an option just to take out everyone. There is also melee to add to the sneaking around. On one of the missions I did have to confront the Separatists head on. The pistol worked fine for that and grenades, as they are effective to reach your goal.

[amazon asin=B00ZJEIVB2&text=If Sniper Ghost Recon 3 sounds like your bag, order a copy from Amazon now and be ready to take aim on opening day!]

Although I didn’t get much of the story the beta did give a snapshot of main characters in the game. Jon North is the main playable character and is a former Marine and sniper. During the two missions I played he was solo. It actually helped a lot to complete my objective going solo.  However, future missions may require more members of a team to be present and the data  currently available suggests more characters will show up later.  Nor did I have many contacts during the beta.  Only two were present but they aided in completing my goals.  The main contact, especially during Cut Off

were I had to infiltrate a Separatist base and re-position satellites was Frank Simmons. There was also the mercenary Lydia that assisted in my missions via radio contact.  She was a voice in the mission briefing for the Blockout mission, she is former military and from Georgia. In Blockout I had to take out a target and recover a drone.

The only issue I had with the beta was controlling the drones.  It was great to be able to have access to a drone that could scout out the mission area.  However, the drone wasn’t easy to control and I found myself bumping it in to objects more than flying it in a direct path.  Also, the Separatists kept seeing it and destroying the drone. It was very small so they must of seen the poor control I had over it.

As I have mentioned the enemy is identified as the Separatists. They are a Russian speaking minority from Georgia and are well armed. Not only are they well armed but the Separatist even have helicopters and armor making missions a bit more challenging.  On missions and alone Jon must infiltrate Separatist controlled bases with his arsenal, training, contacts, and a drone. Now even in the beta I learned not to underestimate the Separatists, they are well trained and can prove a challenge for even the most skilled sniper. They also recognize you as a sniper.

To your advantage and from a good sniping location you can take them out fairly easily.   Most often when they are in cover, walking around unaware of your presence, or guarding areas. Once you attack they are all on alert.

In the beta there was a safe house, a cave that Jon North can use. Here you can plug in a tablet for intel, use the workshop to construct new weapons, equip and purchase more armaments and ammo. Also you can rest in the bed. During the beta a timer was given to set how long you can rest. The workbench also allows you to construct grenades and mines, which prove useful when infiltrating buildings. You can’t make or purchase ammo and armaments without parts and currency, which is looted during missions.

We also had drones available to scout out mission areas. In the beta I was able to upgrade my drone with abilities like recon, night vision, and luring.

In his safe house, Jon can also stock up on adrenals, pills, and med-kits to keep alive during missions. When on a mission, if you die you go to a checkpoint but if a checkpoint has not been reached you just start from the safe house or outside the mission area. In the beta I wasn’t sure I had reached a checkpoint. It would be nice to have an indicator but we will see what comes out of the full game.

Blockout was difficult to determine the checkpoints but in the mission Cut Off reaching a satellite tower and completing each objective was a checkpoint.

I found the climbing system to be be good. I was able to move up and down buildings and cliffs with ease. At some points I had to get to an objective across a ravine or between buildings. The game provided at strategic locations zip lines to quickly get to the next objective.

For the beta I had access to a lot of features. One was the menu. Here players can check mission goals, and view the map during missions. You can also equip gear, gadgets, and weapons on the move. It was also very fluid. I also found that I could have more than one type of weapon. This even included two sniper rifles. Because you can’t have too many sniper rifles.

One lesson from the beta was to make sure I had enough ammo. Looting corpses or crates only yielded trading goods and parts, but there was no extra ammo in the mission. It made me work harder to keep my ammo stocked and not waste it, especially my sniper rounds.

Just playing this beta I can say Sniper Ghost Warrior 3 has potential for being a fantastic modern day military first person shooter game. I am excited by it, and it has  a sense of realism some other military games don’t bring. You are in the shoes of a sniper and the beta delivered on the realism of taking down enemies as a sniper, ghost, or warrior.   You shoot an enemy with your sniper rifle and the enemy goes down.  It is simple and not overly dramatized in any way. This beta gives the game potential and it is off to a great start. A great open world environment with many features to satisfy gamers and those passionate about good realistic military style games.