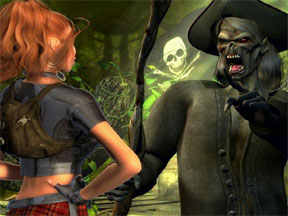 What more could you want for in an adventure game?

I have played a lot of adventure games in my time, going all the way back to Zork on the Apple IIe. I’ve seen it all and done it all. But The Rockin’ Dead is different. This charming and campy game won me over, and could steal your heart too.

First off, you have to be the type of person who likes adventure games, and can tolerate them being a little on the silly side. In a lot of ways The Rockin’ Dead reminded me of some of those old LucasArts titles back when they were still making non-Star Wars games.

Grim Fandango comes to mind, but many of the others also fit the bill. In this respect The Rockin’ Dead has many of the same charms and flaws of these types of games. You know, the you can’t light a cigar with matches but you can with a glowing piece of bone type of logic that most of these seem to have. So knowing what you are in for, and there is a large group of people who love games like this, we can continue.

The Rockin’ Dead follows the lives of three rock stars from the group The Deadly Lullabyes. You play Alyssa, who seems to be the smartest of the three. It seems the group has fallen on hard times. They apparently had a great single a few years ago, but have not been able to follow up on that success. They are now practicing in a dingy downtown warehouse and no longer have an army of roadies to help out.

Plus, their manager skipped town with a lot of their money, so the girls are pretty much starting over from scratch in the music business.

However, things seem to be looking up as they receive a mysterious flier inviting them to a rock festival where they are the headline act. Instead of questioning why they never heard of a festival in their honor, they hop in their converted ambulance tour bus and zoom off into the wilderness.

The ambulance wrecks and Alyssa finds herself alone. This is where the real adventure begins. She quickly learns that the place she’s trapped in is filled with skeletons. But the undead are not actually all that unfriendly, at least not all of them. And you keep running into references from your hit song, which adds to the mystery of the world.

Graphically, the game is really well done. The art style is a sort of modern cell-shading type that is a real pleasure to look at. The girls are pretty sexy too, especially in the cut scenes that you tend to trigger from time to time. And that is when the game is running in normal 2D mode.

When you activate the 3D (actually the 3D is activated by default, you have to press a button to move the game into 2D mode) everything takes on a more realistic feel. The 3D is achieved here using the old school red and blue glasses, not the modern polarized sunglass lenses we are used to seeing. Actually, I kind of liked this. The game is incredibly campy in flavor, and those old-style 3D glasses really pushed this point. Not to get all geezer on you, but I do remember going to the 7-11 to get a pair of 3D glasses for the Saturday night creature feature on TV, so the red/blue tech may be old, but it works.

In 3D The Rockin’ Dead really pops. I didn’t think I would like it at first, but given that the adventure game is basically a 2D world with scenes and characters layered overtop one another, making one element or another stand out is not that difficult. I will say that the cut scenes seem to suffer a bit in 3D mode. I think that is why a lot of them seem to be in black and white, with only the frame around the screen being made into 3D. By contrast, the actual gameplay area looks fantastic in 3D. I felt like I could reach out and touch Alyssa, which would not be a bad thing.

The audio in the game is pretty good. How many adventure games have we reviewed in GiN where the audio drags everything else down? That is not the case here. Alyssa is the character you will hear the most, and she has a very pleasing voice. I can imagine that she’s really a rocker pretty easily. Most of the minor characters with a few very small exceptions sound good, though I don’t have a lot to compare them with. I mean, what does a skeleton sound like? At least they don’t sound like Bob in the corner office who needed to come out and say a few lines to finish up the game. Everyone sounded pretty professional.

Taken as a whole, The Rockin’ Dead is a solid adventure game. I personally liked the 3D angle, but it’s also nice that you can deactivate it and have a perfectly fun time without it. Some people can’t play in 3D and it gives others headaches, so the fact that it’s optional is nice.

The bottom line is that I had a lot of fun with this one. It’s been a long time since I played a really campy adventure and laughed out loud at the pure silliness of it. In fact, The Rockin’ Dead is one of the better games of this type to come out this year, 3D or not. As such, I give it 4 out of 5 GiN Gems.