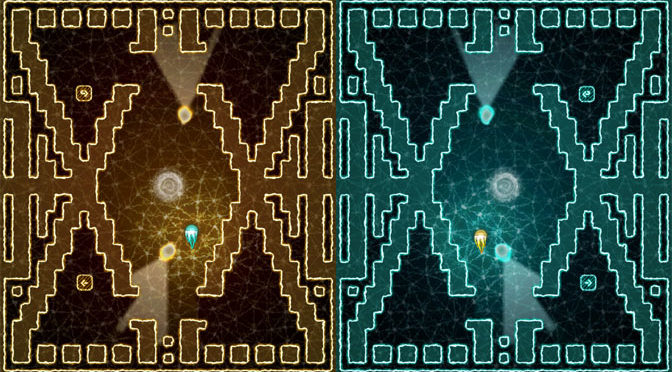 Can a game be both soothing and fiendish? Normally, I would say no, and yet Semispheres manages to be both. Semispheres is a puzzle game with a soothing soundtrack and the background look of a neural network that is organic and relaxing. The puzzles themselves though, are more of the fiendish variety.

Each control stick on the game console controls its own icon, and the player has to move them independently to complete tasks. It’s like a left side, right side brain thing. 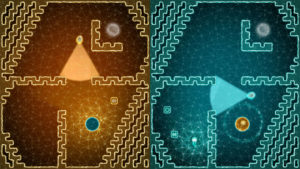 Every screen starts out together and then splits into the two separate screens. The layout of each screen is the same, except, each side has its own sentries, its own action buttons, and it’s own portals through which, each icon can manipulate the other screen but not enter it, or not initially. In later puzzles there are action buttons that allow for teleporting and other actions. Does that sound confusing? It is at first.

After you’ve played for a few minutes, you catch on and then the puzzles get more challenging. How can I get past this sentry? Oh wait, I can’t. How can use my sound button and this portal to move the sentry on the other side. Ah ha! I can do that. And so it goes. You must methodically move back and forth between the two screens to manipulate the icons to the exit portal that they must both enter to remerge the screens and go on to the next puzzle. 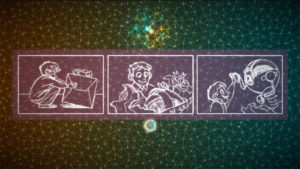 After every five puzzles you are treated to a little cartoon panel about a boy and his robot. Does this add much to the game? Not really, it’s but it doesn’t take away from it either and it is kind of cute. It’s tied into the whole neural network thing, but it’s superfluous to the puzzles.

The thing that’s really compelling about Semispheres is the puzzles themselves, somehow they really stick in your head. Maybe you’re playing late at night and you just have to go to bed, so you leave the last puzzle unsolved knowing you can pick it up again tomorrow. Then you go to bed and have dreams of neural networks and little neuron icons that look like tiny comets sailing along them. It’s weird, but in a good way. 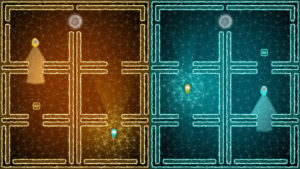 I like a good puzzle game and this one is quite clever. I highly recommend it to puzzle fans and to fans of abstract games in general. You won’t be disappointed. Semispheres earns a perfect 5 GiN Gems overall score! Check it out and let us know what you think in the comments below.