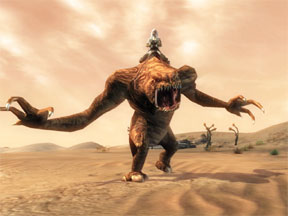 When LucasArts released Empire at War earlier this year, I kind of braced myself for the worst. LucasArts has not had a good history with real-time strategy games. The games they have made over the years were either too darn boring (Rebellion), had way too complex controls (Force Commander), or were just so darn cookie cutter that most of the Star Wars flavor was wasted (Galactic Battlegrounds).

Then Empire comes out and – bam! – like the Revenge of the Sith movie, it made up for a lot of the sins of the past. The game featured the perfect blend of fleet space combat and toe to toe slugfests planetside. Plus the overall strategic map where you plot your moves around the galaxy was both extensive and easy to manipulate.

But I will have to admit that the release of the Forces of Corruption expansion pack was a bit of a surprise. After all, Star Wars has always been about the Empire and the Rebellion (plus a little minor thing called the Clone Wars). So I kind of thought there was not really a faction left to set an expansion pack around. But as Yoda once said, "There is another."

Remember all that scum and villainy sitting around the bar in the famous cantina scene? Well, most of those guys might be freelancers, but at one time or another they have worked for a crime boss, some evil person who controls an empire no less powerful than the one with the capital E, and much more ruthless. Forces of Corruption follow the trials and tribulations of one of these would-be bosses, a man known as Tyber Zann.

Tyber has an interesting back story. Like another famous former Empire employee turned pseudo bad guy, Han Solo, Zann was once an Imperial. But whereas Solo could not really shed his natural compulsion for good, Zann has no problems embracing the dark side. He has a burning hatred for the Empire, but his anger knows no bounds, and he won’t lose any sleep if he has to destroy some Rebellion troops to achieve his goals either.

The main part of the expansion is the campaign where Zann rises from a minor smuggler into a crime boss that even Jabba The Hut fears (if you have not outright killed Jabba along the way). Zann’s forces start out a bit weaker than either the Empire or the Rebellion. In space, Zann is mostly supported by decommissioned Empire vessels like Skipray blast boats and civilian freighters converted into military vessels. Luckily, Zann’s engineers have fixed up most of these vessels to be more powerful than their standard civilian counterparts.

But you may not, at least at first, be in a lot of upfront battles. Zann’s forces don’t necessarily have to conquer a planet in the traditional way by winning a space battle above followed by a land conflict below. Instead, Zann can corrupt a planet by bribing an official, intimidating the ruling class or setting up a pirate ring to raid shipping. Doing this often initiates a set piece battle where you are given a few forces and the enemy is as well. Using smart tactics, you can win these conflicts. This puts a hazy yellow cloud around the planet to let you know that it has been corrupted. The default rulers remain; you get a steady stream of credits, information or even new ship blueprints from the process.

Even if you eventually want to conquer a world, it is good if you go ahead and corrupt it first. Depending on what type of corruption you use, you can spy on their base layouts, get an accurate count of enemy forces or even prevent any local militia from coming to your opponents aid. Setting up a black market (you need one on an Empire and one on a Rebellion planet) can let you purchase the best technologies that your enemies are using.

You also have a few tactical options that were not present in the original Empire game. For instance, you can plan out how your base is configured, putting buildings together and ringing them with troops for instance. I would have preferred going even a step further and being able to actually plan out how the turrets are configured, which can still only be done after a battle has been initiated. You can also spy on your enemies to see how they have things setup.

Of course the Zann faction has a collection of its own heroes, each with their own special abilities. Including Zann, who has a powerful blaster on land and eventually can command a cloaked battleship, there is also Bossk and IG-88. The Rebellion gets some new heroes as well, like Yoda.

Other additions include 12 new planet maps including a land battle at Cloud City plus places made famous in other Star Wars games like Mandalore. Also, the original 43 worlds that make up the galaxy also make an appearance.

Zann has a lot of new ships that you have never played with before, plus some unique ground units, like mobile build platforms. The big addition in the single player game is the Eclipse, which is a unique super star destroyer 11 times as big as an original Star Destroyer. Basically, it has as much firepower as the Death Star, but also can take part in battles (other then just blowing up a planet). The Empire is building it in the single player game, but when the Emperor and Darth Vader die, Zann can sweep in and steal it in the resulting confusion.

Forces of Corruption adds a new meaning to the phrase "May the force be with you," because Zann is standing nearby with a blaster to add, "Or Else." It’s a lot of fun to play a non-famous faction in the Star Wars universe to remind you that there are a lot of normal non-jedi people out there just trying to get by in the world, in their own way. Corruption adds to an already impressive RTS game, and gives gamers a great excuse to get back into the core game, or to discover the real majesty of the Star Wars universe for the first time.