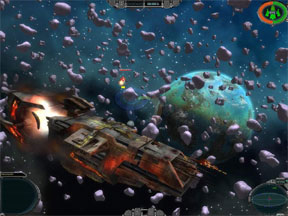 Computer games where you can explore the entire universe in a fairly non-linear fashion are few and far between, which is odd considering it’s pretty much every sci-fi fans fantasy to grab a ship and sail off to adventure in the depths of space.

The first game that I can remember that fit this bill was Starflight, one of the first titles published by then newcomer Electronic Arts. I still have the game and the original packaging, complete with pictures of the developers in spacesuits inside some type of lunar landing craft (I think that’s what it is.) In a more modern sense, the father of this genre would be the Privateer series, which really peaked with Privateer II, one of the best games of all time. It was like the much loved Wing Commander games, but instead of flying mission after mission in a linear fashion, you were turned out into the world to make your own path. A few years ago Microsoft released Freelancer to follow this trend. Freelancer was a great game, but was lacking in a few areas and never quite lived up to Privateer II.

Now along comes DarkStar One. Like the aforementioned titles (except Starflight which was a bit different) you are quickly given command of a ship and sent into the cold, hostile universe. You play Kayron Jarvis, a young pilot whose father has died. It turns out that Kayron’s father was apparently murdered when his ship was sabotaged. Thankfully, Kayron’s dad was not flying the prototype DarkStar One vessel at the time, which is then willed to Kayron. The DarkStar One is clearly the most unique ship in the universe, though at first it will seem pretty normal.

The biggest thing about your ship is its ability to upgrade and grow over time. And we are not talking about adding a new module to the hull either. The DarkStar One is very much a living ship. There are artifacts scattered across the galaxy. Whenever you collect enough of them, you can grow your ship, which not only changes the way it looks but also its characteristics. And you can choose how you want your ship to grow, so you can make one of the fastest, most maneuverable ships in the universe, or something more on the lines of a heavy cruiser.

Increasing the hull of the vessel gives you more hit points and adds bulk to your craft. It also allows the adding of turrets, which automatically fire at enemies that come into their firing arcs.

Increasing the wings on the DarkStar One tends to flatten out its appearance a bit. It also gives you the ability to mount more player-controlled forward facing guns.

Finally, increasing the engines gives you more flame-filled exhaust ports in the show department, but also makes your ship faster and more maneuverable. Also, the bigger your engines the more shield energy and weapon power you can generate.

All three components tend to work together, so for the most part you will need to level your ship up fairly evenly. Having a ton of weapons tied into a minuscule power supply won’t do you much good after all. Still, once you have achieved a certain level in all the components, you can safely branch out and configure your vessel however you like. I tend to like a big, heavy, weapon laden ship. But I can see where others would go with a speedy maneuverable craft with lighter weapons. After you have improved all the components a bit, the choice is yours.

Space is divided into clusters that are controlled by different races. Each of these clusters that you visit is increasingly difficult in terms of the bad guys that inhabit them, so the game is a bit linear in that sense. But there is nothing to stop you from going back to previously visited clusters to trade or whip up on some pirate gang that gave you trouble early on.

The game does a good job of letting the player choose how their character wants to act. You can become a ruthless pirate, a mercenary or a peaceful trader, visiting systems to buy low and sell high. A reputation system tracks your progress and there are even penalties or bonuses once you achieve the highest level along your chosen tracks.

The game is simply beautiful to behold. Without a doubt this is the best-looking space simulation ever to grace a PC’s screen. There are all the colorful nebulae clouds, asteroid fields and space debris floating around out there that we have come to expect from watching countless reruns of Star Trek. Combat is fairly standard for a space game with you twisting and turning, spinning and using your afterburner to try to get a missile lock or laser shot on your opponents. They explode nicely, complete with final screams over the radio, often cut off as they turn into space dust.

As good as DarkStar One is, it’s not perfect. You have to install the 1.2 patch if you want the game to be stable. Without it, crashes happened on our high-end test system every few minutes. With the patch it works a lot better, though there still is an occasional crash to the desktop. Also, the game was created outside the United States, and the voice acting is not the best. The actors and actresses do a good job (the people that play Kayron and his beautiful co-pilot Eona, who you will find early in the game, do a great job) but the translations are a bit off. The taunts from bad guys are ridiculously silly and sound more like kids on a playground than hardcore pirates trying to cut your throat.

Also, while the main story missions are varied and different, with some of them having you manning a turret defending a space station and some of them find you flying your ship inside a planet’s atmosphere or inside a station, the side missions are mostly the same. There are about six different types of side missions you can go on from the ever-present job terminal, and then there are few surprises. This makes the game feel a bit repetitive after a while. It could not have been that hard to come up with some more mission types, but the developers did not seem to put much effort into this. Don’t confuse terminal-given missions with the formal Side Missions, which are for the most part tied into the main plot. There is one extremely difficult Side Mission per cluster and they are top notch.

In all, I would rank DarkStar One up there at the top of the heap of non-linear space combat type games. It does not quite measure up to the Privateer series but edges out Freelancer by a nose. It earns 4.5 GiN Gems and will have us eagerly awaiting the release of DarkStar Two sometime.