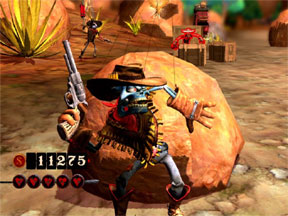 A few months ago I was looking for a new exclusive Kinect title to play. Over the months the sensor attached to my wall didn’t really get much attention, but after Chella wrote about Child of Eden, I decided to give it a try. After all, I liked Rez. Was that a mistake! If I thought playing Alan Wake was boring, it was nothing compared to Child of Eden.
So when I received another Kinect-based rail shooter in the form of The Gunstringer, I thought to myself that it might be just as slow and uneventful. Again, I was wrong, and this time for the better.

Finally I get to play a Kinect title that is actually entertaining, and surprisingly chocked full of surprises to get me back to playing with it.

I could say the plot of The Gunstringer is about an undead Clint Eastwood type skeleton who has come back to life to extract revenge on the gang that killed him (an obvious homage to Kill Bill,) but the truth is the real plot of the game is that you are presenting a puppet show to a live (or in this case, FMV) audience and the Gunstringer himself is controlled like an actual marionette with your left hand. Your right hand controls his gun for most of the game, as a majority of it is a rail shooter similar to Panzer Dragoon.

The Gunstringer’s six-shooter can lock into the same number of targets before firing, which is done by tilting your right hand upwards, as if simulating recoil. Most of the time the action works quite effectively, but there are some times when it can result in a misfire. Seems like the limitations of the Kinect are taking over again.

There are also some parts that simulate a cover based shooter. When the Gunstringer is hiding behind cover, he must peek out (by moving your left hand in either direction) before firing. Again the Kinect limitations come into play here because I had moments when I was stuck in cover and couldn’t fire, or I was left in the open and taking damage.

Nonetheless, the limitations of Kinect don’t make the game unplayable. Far from it, because a majority of the game is not just playable, but very entertaining. In addition to the rail based shooting, there are side scrolling platform elements that surprisingly run quite well, and the boss battles have to be seen to be believed. They are shown from the perspective of the audience, and the crowd in front of you is shown reacting to the action like an episode of Mystery Science Theater 3000! If only it had them heckling me as I was playing, but then again, we already have the side-splitting narrator doing that for me.

The dialogue the narrator provides during the game is hilarious and fits the overall mood of the game quite well. It does get a little tedious though when he mentions repeatedly about making six hits at once, but the story line dialogue is just fantastic. What’s even better is the way the crowd reacts to every action that occurs in the game. If this was an 80s sitcom, I’m sure there would have been a voiceover saying "The Gunstringer has been recorded in front of a live studio audiences." Usually I hate laugh tracks when they’re used in sitcoms or even cartoons (Scooby Doo for instance,) but here they work perfectly, as well as the actual FMV reactions from the crowd during key scenes. Twisted Pixel loves to implement FMV in their games but unlike the nightmarish days of the 90s, here it actually works quite well! It is an excellent way to break the fourth wall.

The musical score is amazing as well. I never heard of the game’s composer, known simply as "Chainsaw," but he does a marvelous job with the soundtrack. It’s almost as if he channeled Morricone to get the spaghetti western feel done right.

I also love the game’s visual design. All of the characters look like they actually are puppets, in fact the game’s Sheriff looks like he could have come right from Jim Henson’s studio. I also love how the cows in the game appear to be made from full beer cans, and how they foam up after being shot. The way some of the scenery looks (all flat props) reminds me at times of LittleBigPlanet. Sadly some of the visuals come at a price in the form of slowdown, even in some of the FMV sequences. Thankfully this doesn’t happen all the time.

The Gunstringer was originally to follow Twisted Pixel’s previous titles (the Maw, Comic Jumper and both ‘Splosion Man games) as an Xbox Live Arcade game, but was made a retail game. On the bright side there are tons of extra features in the game to unlock and enjoy, but that is just the start of it. DLC is promised for The Gunstringer, and if the Day 1 DLC is any indication, I can’t wait to see it.

The Day 1 DLC is called The Wavy Tube Man Chronicles. What at first looks like as a clone of the 90s FMV light gun game Mad Dog McCree turns into one of the funniest parodies I ever came across, lampooning elements of The Terminator, Back to the Future, and even the main theme to Top Gun.

And who was the masterminds behind this gem of a DLC? TROMA ENTERTAINMENT! That’s right, the geniuses behind Z-level cult schlock such as the Toxic Avenger and Class of Nuke ’em High helped make this masterpiece, and founder Lloyd Kaufman make an appearance as Doc Lloyd. All of this for the wonderful low price of FREE, just too bad the 2 GB download takes a long time but it is well worth it.

Oh and did I mention that a download code for Fruit Ninja Kinect is also available with this $40 package?

Needless to say, the Gunstringer is an excellent value for a Kinect game. It is fun, hilarious, accessible, challenging to any gamer, with tons of material to keep you coming back for me. After the disappointment that was Child of Eden, I’m glad to see a rail shooter that will make me come back for more!

Pros: Compared to another rail shooter (Child of Eden,) this game is actually FUN. Hilarious storyline and narration, with the trademark Twisted Pixel FMV. Excellent use of 4th wall breaking with the live theater audience. Adding Fruit Ninja Kinect in a $40 package makes a great value. The MST3K point of view in boss battles. Tons of hidden treasures, and promises extensive DLC, already starting with a 2 GB FMV shooter done by TROMA! Unique Kinect execution…

Cons: …that can sometimes be a little touchy. The usual Kinect glitches apply and yes that will result in tiring. Some confusion with double gun action. Frame rate issues.