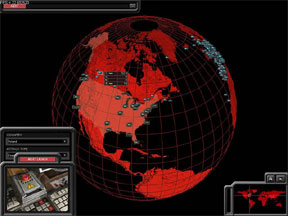 SuperPower2 is a nice little $30 (USD) game where you take over the management of any one of the 193 countries around the globe and then take on the world. You do this by managing your chosen country in three main areas.

You run the Political, Economic and Military aspects of your chosen realm. When I first saw the spinning globe that the game is played on all I could think of was the game that Klaus Maria Brandauer and Sean Connery play at the casino in the James Bond movie "Never Say Never Again" (1983).

Needless to say SP2 was not that painful (in the movie they get an electric shock when they lose territories). Nonetheless I found the game to be challenging and amusing.

I often pop a new game right into the computer and then go from there. If I read the manual at all it is while I am waiting to get home after work. SP2 is not a game you can play right out of the box without reading the manual.

SP2 does however have several introductory tutorials that at the very least convey the basics of the game and then you really have to go forth and take on some of the opening missions to really get the hang of the game.

Once you get through the tutorials there are single player missions with varying degrees of difficulty, typically with goals in either the political, economic or military areas. Finally when you think you are good enough, the ‘sandbox’ game play (custom mode) you can select one of 139 countries and sets two victory conditions. Master this and you are ready for the real world. And by that I mean 32 multi-player human combatants, which reminds me of the game RISK I used to play in college, but on a much grander scale here.

The game map, fully zoomed out to the spinning globe looks amazing. I especially like the passing from day into night. As you zoom in you begin to see roads, rivers, and mountains in detail. This all very well done, but then we come to the day-to-day dealing of running your country.

The most used submenus are the political and economic menus. And I have to say that I struggled with this the entire time I played the game.

To put it simply, there is way too much data unless you’re an economist, and making changes just does not seem to affect the outcome. For fun, I converted everyone in Iran to Judaism (no real effect) then I proceeded to attack everyone in the Middle East.

On the economic side, just do what I did and basically cut spending and save money. On the political side, if you’re going for a reaction, try the dirty trick. That will get you some results.

Onto the third area, which is combat. Combat is done using a graphical representation which is cool because even though you don’t have any direct control, you do at least feel it when you loose troops. Though if you really want to have some fun, use your WOMD (nuke someone).

At least here I could understand the nuts and bolts of the data. You have to choose between civilian or military targets, what forces to use and at what level, the percentages of forces employed and so forth.

On the whole, I found Superpower 2 to be a fun world domination game, though I have to recommend multi-player over the built-in missions. Dealing with real people really does add a great dimension to the game. Get past the less-than-perfect interface and the less-than-wonderful background sounds, and you can take on your friends to see who is the best world leader.