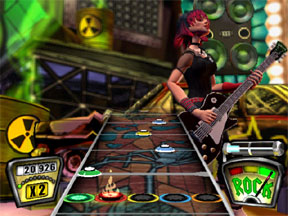 Several years ago, when attending my first ever E3, I stopped over at Konami’s booth, and it was there that I experienced an import title called Guitar Freaks. This was before I had my first DDR experience, mind you, and I didn’t know what to make of it. But after getting some guidance from a PR rep, I was hooked, and was looking forward to an inevitable US release.

That wasn’t the case, however. While DDR received many releases in the US, Konami still would not release a US version of Guitar Freaks. My only option was to import a copy from Japan, which would have cost me a lot of money.

Not only would I have to pay for the game, but also the guitar controller to play it. I never got to doing that, but last summer I met with RedOctane. They showed me to their booth, and in the back, they unveiled a new guitar title, called Guitar Hero. While the demo was still early, the game shown a lot of promise.

That promise was improved while attending VGXpo in Philadelphia. Guitar Hero was one of the show’s highlights, and in the two days of the event, RedOctane was able to sell every copy they had, as well as taking several orders to be shipped.

Now I finally had my chance to play Guitar Hero on my PS2, and all I can say is that Konami really dropped the ball, and RedOctane is running away with it!

The concept of Guitar Hero is similar to any other rhythm based game you may have played. The game display consists of a bar with five buttons on the bottom, which represent the five buttons on the guitar’s fret. As the icons reach the bottom, a combination of pressing the right fret button while strumming the guitar will play the correct note. There are also long notes that are played by keeping the guitar in a strummed position. A whammy bar can also be used on long notes, to add a little freestyle.

At certain times special star notes will appear on the screen, and completing them in succession will increase your Star Power meter. When Star Power is available, tilting the guitar upwards will power up your character, doubling the combo multiplier and insuring your Rock meter from any possible reduction from mistakes.

The gameplay might seem very simplistic, but the only way to experience it is with the included SG Guitar Controller. Usually pack-in controllers are not in the best quality, but RedOctane, who is acclaimed for their Ignition Dance Pads, have included an magnificent guitar controller. While being a little smaller compared to real guitars, it feels real to the touch, and is easy to get a feel for the game.

Graphic wise, Guitar Hero is a winner. Harmonix took the graphics engine from their Karaoke Revolution series, gave it a heavy metal look, and the results are amazing. Your guitarist plays the actual notes that you play with the controller, and when in Star Power mode, he/she throws their guitar in the air, or even spins it around while playing. Some camera angles are amazing, one of which appears to be from the bottom of the guitar. It’s dizzying at times, but not at all distracting.

Of course, a game based on guitar playing needs to have a great soundtrack. Well with at least thirty of the best known rock songs of all time (including Iron Man, Sharp Dressed Man, Ziggy Stardust, and my personal favorite, Ace of Spades), as well as several bonus in-house tracks, there is a large variety to play with. While the songs are performed by cover bands as opposed to the original artists, it is almost impossible to notice any change. I never thought that covers could sound this good!

Some people might complain that some key songs or bands are not included (classic Metallica, as in the Cliff Burton, pre-Black Album days, for example.) However, since Guitar Hero plays so well, and is so easily accessible, I’m sure a sequel will be in the works.

Guitar Hero is a long time coming. On one side, the US finally gets a guitar based game that plays even better than Konami’s Japanese original, and on the other side, we finally have an original game that anyone can get into. I won’t be surprised to see Konami unveil Guitar Freaks to the US after a six year hiatus, but I’ll be sticking with RedOctane’s masterpiece!