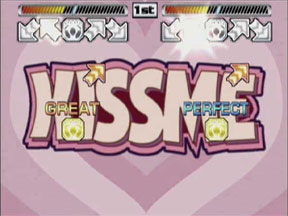 Pump It Up: Exceed

DDR wasn’t truly the first dance game that I have played. Back in 2000, I stopped at my local Dave & Buster’s, and they unveiled a dance title called Pump It Up. While it took me a while to get a hang of it, in a few weeks I was able to perform with some of the best in the area. I was able to perform what I referred to as a "Suicide Mix," which was four of the more strenuous songs in succession.

Eventually I moved on to DDR, but I played PIU on occasion, and in fact, it was PIU that caused me to retire from the genre. While performing Beethoven Virus, I tried to attempt my trademark finisher, an aerial 360 which ended with a double knee drop. Needless to say I mistimed the landing and shredded my knee.

It was after my injury that I decided to give the game a rest. Pump It Up’s general game mechanics are identical to that in DDR. It is so close, in fact, that Konami threatened legal action against Andamiro, the Korean based company that created PIU.

The key difference in the game is the layout of the floor mat. While DDR consisted of four buttons in a cross shaped configuration, PIU’s five button setup has four corner buttons and one in the center. The center button makes the game feel more appropriate for choreographing dance style moves as opposed to the stepping functions that DDR is more known for.

The soundtrack is also unique for PIU. Based more on Korean pop music as opposed to DDR’s J-Pop, PIU has a musical flavor of its own. Of course, conventional musical tracks from the Crystal Method and the Sugar Hill Gang are included. In all, there are about 100 songs to choose from, far more than any other dance game released in the US.

Songs can be played over five difficultly levels, ranging from simple steps with one pad in Normal, but will eventually go up to Nightmare mode, which runs a nonstop torrent of steps that require two pads. The difficulty of Nightmare mode far exceeds anything that DDR can possibly think of.

Modifiers such as speed boosts and vanishing arrows are available, but they just do not reach the insane level of modifiers that In The Groove has.

PIU’s background videos have always been strange. Most of which feature anime based backgrounds, and they always look strange, but others like Beethoven Virus feel more authentic. In addition, just like in DDR, some of the more conventional tracks play their music video in the background. Simple, yet effective.

Pump It Up is still popular. When I go to D & B’s every Saturday night, there is still a large crowd that shows up, and while I’m officially retired from playing in the arcades, I will still play at home, and Mastiff/Andamiro have done a good job in converting their franchise game to the home systems, and those who are looking for a good alternative to DDR will be quite at home with Pump It Up.

It earns 4 GiN Gems for this dance mat and game combo.